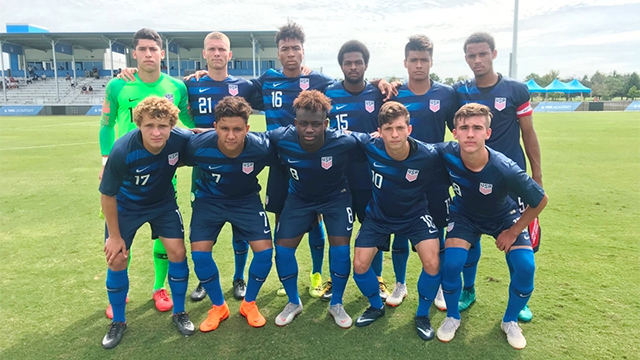 On the final day of competition, the U.S. Under-19 Men’s National Team rode a three-goal second half surge to a 4-1 win against Jamaica and the top of the final standings of the 2018 U.S. Soccer U-20 Men's Invitational.

Using goals from Isaac Angking, Declan McGlynn, Ulysses Llanez and Joshua Penn, the U-19 MNT finished the early game of the third matchday on top of the table. The team then awaited the result of the later game between the U.S. Under-20 Men’s National Team and Venezuela, to confirm its title. With Venezuela needing to surpass the U.S. on goal differential to have a chance at the title, the U-20 MNT insured their younger counterparts need not worry, defeating La Vinotinto 3-1 to finish second in the final standings.

U.S. U-19 MNT 4, Jamaica 1:
The U-19 MNT got off on the right track, scoring first for the third consecutive game of the tournament as Angking converted a penalty kick in the 24th minute. The New England Revolution midfielder’s conversion was equalized five minutes into first half stoppage time by Jamaica’s Tyreek Magee.

Two minutes into the second half, 2017-2018 U.S. Soccer Development Academy U-16/17 West Conference Player of the Year Llanez won the ball off an ill-timed back pass from Jamaica, and immediately played a pass into the path of McGlynn who finished into the bottom right corner of the net.

In the 74th minute, Llanez was back in on the action, this time on the goal scoring end of the USA’s attack. Receiving the ball from LA Galaxy teammate Julian Araujo, Llanez fired from 25 yards out and into the right upper corner of the goal.

Three minutes later, the USA put the game away for good. Receiving a pass inside the Jamaica penalty box, forward Manuel Terrazas played a cross back through the box to the feet of Penn, who finished into the net.

U.S. U-20 MNT 3, Venezuela 1:
In the later match on the final day of competition, the U.S. U-20 MNT got off to a quick start with a goal from AFC Ajax speedster Sergino Dest. The strike, coming in the second minute, was assisted by Dest’s fellow 2017 U-17 FIFA World Cup teammate Jaylin Lindsey.

A half hour later, Venezuela evened the score line from the penalty spot.

Entering the second half tied 1-1, LA Galaxy midfielder Alex Mendez sparked the USA to victory with assists in the 63rd and 64thminutes.

In the 63rd, Mendez found Atlanta United Homegrown playmaker Andrew Carleton for a score and a minute later connected with Toronto FC Homegrown forward Ayo Akinola, who cemented the 3-1 win.

The victory vaulted the U-20 MNT to a second place finish at the tournament.