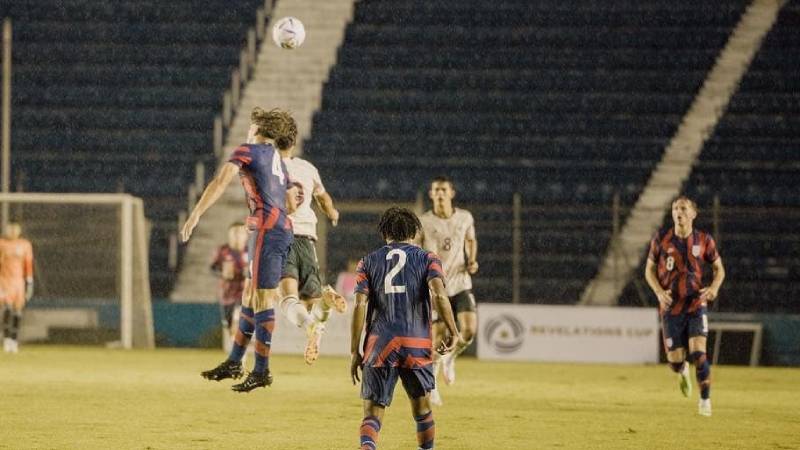 Quinn Sullivan turned his head to the sky, grimacing, breaking out into a half jog as he was substituted late in the second half of the US U20 YNT’s clash against Mexico. It was an expression emblematic of the US’ performance, one in which Mikey Varas’ team had control, but failed to capitalize.

Paxten Aaronson and Diego Luna combined well in the opening stages, forcing Mexico goalie Jose Eulogio Téllez into an early save. More US chances followed, including a shot from Sullivan that rattled the crossbar. But for all of the looks, Mexico capitalized first, with Christian Torres finishing a well worked counter attack with a clinical finish. Its second followed five minutes later, as Joshua Mancha whipped a free into the top corner from 20 yards out.

And the US never really recovered. It clawed one back from the spot in the 36th minute after a handball gifted the US a penalty. But chances from open play were few, with a sturdy Mexico defense keeping Varas’ squad mostly away from goal. The 2-1 defeat, then, was perhaps a fair one, with Mexico striking twice before putting on a defensive clinic.

Here are three takeaways from the US loss.

The lack of a true striker showed

A lot has been made of the U 20’s lack of a clear striker. Thus far, Varas has been happy to switch between Aaronson, Jackson Hopkins and occasionally Kevin Paredes in a central role. It’s a spot hastily dubbed a false 9. Though all three are comfortable on the ball — and can pick a pass — they sometimes lack the innate ability to link play and drop deep that so often defines the position. And it showed Saturday night. As the US searched for an equalizing goal, Aaronson pushed forward, leaving the duo of Luna and Alvarado to create — but lacking a target to hit. Full backs Mauricio Cuevas and Caleb Wiley were similarly frustrated, swinging crosses into the box without a reliable presence to meet the ball.

This is, perhaps, too easy of a fault to pick out; every team needs a reliable goalscorer. But in tight games like these, having a natural striker is even more important. And for all of Aaronson’s clever runs and timely darts, he isn’t that player. At its best, the US attack flows freely. But when the opposition closes gaps, prevents runs, and squeezes space, the lack of a proper striker becomes a real problem.

The US can be hit on the break

Varas’ squad tends to keep the ball very effectively. Daniel Edelman is a wonderfully effective deep lying midfielder, who can advance the ball between the lines, or link up with advancing full backs. Luna is a gliding presence, smooth on the ball and quick enough to take opponents out of the game with every direct dribble. Alejandro Alvardo offers much of the same, able to create or take on opponents.

When the US loses the ball, though, it doesn’t quite look as comfortable. Mexico set up in a fairly simple 4-4-2, with its two strikers pressing the ball while the rest of the team sat organized behind the ball. And when it won the ball back, the Mexico attack flowed freely. Luna and Alvardo were caught in transition, while both US full backs found themselves running towards their own goal. Mexico set up its system perfectly in that sense, exploiting the moments in which the US was at its most uneasy. But the lack of defensive cover was concerning, with Edelman often getting pulled out of position by two advancing center midfielders. This is, of course, credit to a direct Mexico attack, too, with Joshua Mancha and Saúl Zamora putting in fine performances on either wing. Still, the ease with which they were able to create was glaring.

This wasn’t a terrible 90 minutes for the U20s. The Revelations Cup — despite the inherent appeal of its eye-catching name — is little more than three exhibition matches. And in a tournament where performances perhaps outweigh results, there was a lot to like here. Christopher Brady was fantastic in goal throughout, producing four big saves and distributing calmly. Edelman also looks more promising with every game as a no. 6, and produced a fine performance in and out of possession. Luna was typically energetic and silky on the ball — while also moving the ball at the right time. And though Aaronson is limited through the middle, his pressing and willingness to run in behind caused some problems in the early goings. Cuevas was also typically reliable, as was Neal.

It’s also worth noting that at 0-0, this looked like the US’ game. It had three clear chances within the first 15 minutes, and also hit the woodwork. Although a lot of analysis pointed out the flaws in a loss, this is an interesting group, one that might well produce some names for the future — and have some success of its own, too.