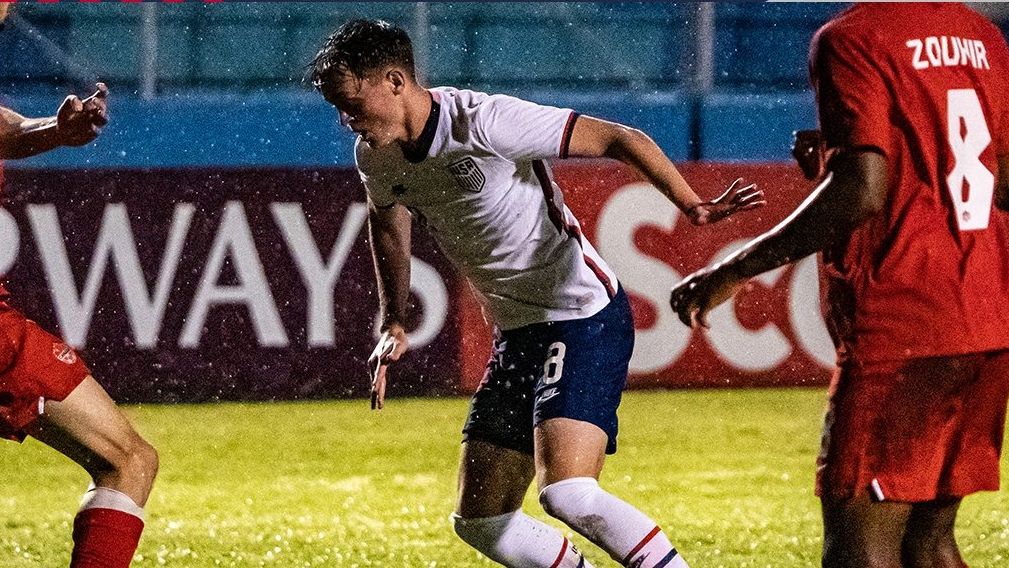 Brandan Craig couldn’t seem to believe that the ball didn’t go in. The US MNT U20 defender appeared to have struck his free kick perfectly, the right force and bend to find the bottom corner from all of 30 yards out. Instead, the ball held its line, grazing the outside of the post.

His set piece strike was the last of 22 US attempts in its 2-2 draw against Canada. It capped off a frustrating night of near-misses and defensive lapses, where the US was punished for its mistakes but loathe not to capitalize on all of its chances. Still, the tie on the second matchday of the Concacaf Championship was enough to send the U20s through to the knockout stage.

It was a gripping contest in a soggy Tegucigalpa, Honduras. The US held most of the possession but was victim to two well-worked Canadian counterattacks. Twice the Canadians took the lead. First was Lowell Wright, who finished neatly inside the box within 15 minutes. The US responded shortly after half time with a thunderous goal from Jack McGlynn. An own goal gave Canada a 2-1 lead before a mazy run from Cade Cowell tied proceedings at 2-2 with 20 minutes to play. Neither side could find a winner from there.

The US outshot Canada, 22-6, and enjoyed 72 percent of the possession, spending most of the 90 minutes probing for opportunities. Canada goalie Ben Alexander, though, tallied eight saves, while the US hit the woodwork twice — and had a couple of penalty shouts turned down. The US guaranteed a spot in the knockout stage with the win, but will have to beat Cuba on Wednesday to top the group.

Canada found the net first. Wright seized on a loose ball before deftly pivoting onto his left foot inside the box. The finished was a poked one, creeping narrowly inside the post for 1-0.

A smattering of US chances followed. Cowell cut onto his right foot and failed to find the bottom corner. Paxten Aaronson had a shot parried away, and saw a free kick saved. A deep Canada block wasn’t breached, though, and the US couldn’t muster an equalizer before the half.

The tying goal came swiftly after the interval. After a short corner, McGlynn found himself with a yard of space just outside the box. His touch transitioned into a driven strike, which rippled the top right corner of the net. Quinn Sullivan almost found a second within two minutes, as he beat a Canada defender, only to see his scuffed shot hit the post. There were further chances in the following minutes. An appeal for handball in the box was turned down and a potential trip of Aaronson was similarly waved off.

Those chances left the US vulnerable at the back, though, and a Canada surge exposed their positional frailty. A well-worked move down the right led to a floated ball into the box, which Halliday knocked past his own keeper to hand Canada a 2-1 lead.

It took three minutes for the US leveler to come. This time, it was Cowell with a well-timed run in behind the defense. He cut onto his right foot and buried the ball into the bottom corner, knotting the game at 2-2 with 20 minutes to play.

The US pushed for a winner in the closing stages. Diego Luna probed with weaving runs through the middle, but a series of flicks, tricks and stabbed shots didn’t lead to anything concrete. Craig enjoyed the last real chance, whipping a free kick just wide in the 91st minute.

So, the U20s were left frustrated, unable to capitalize on a wealth of chances against a resolute Canada defense. A couple of slip ups at the back cost them a win that would have near guaranteed a first place group finish. Although opportunities were spurned and goals were conceded, the result was an acceptable one, with the US granted a chance to defend its Concacaf Championship crown in the coming weeks.