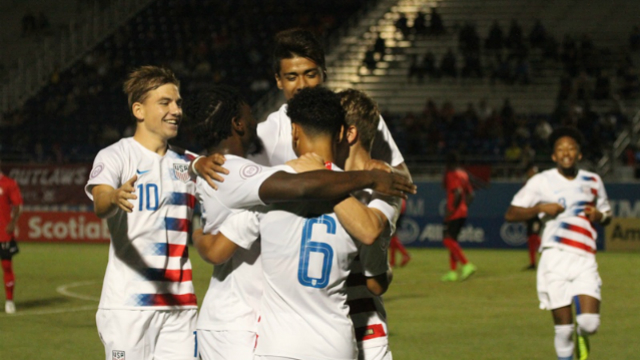 The U.S. Under-20 Men's National Team put in another confident effort, downing Trinidad & Tobago 6-1 in the sides' third group match at the 2018 Concacaf U-20 Championship at IMG Academy Stadium. With the win and other results, the USA now sits three points clear at the top of Group A heading into Wednesday's clash against Saint Vincent and the Grenadines.

Looking to make an early statement, it took the USA just six minutes to get on the scoreboard when a nice sequence between Ulysses Llanez and Justin Rennicks led to Brandon Servania's strike from 25 yards out.

Propelled by the early goal, the USA grabbed a second just two minutes later as Rennicks' shot from the top of the area was redirected by Trinidad & Tobago defender Justin Homer and past goalkeeper Denzil Smith, resulting in an own goal in the eighth minute.

Fully in control of the match, the USA added one more before halftime with Rennicks playing the catalyst again. The Indiana University midfielder latched onto an errant pass out of the back and alertly fed Pomykal at the top of the box for the FC Dallas product to fire home a one-time effort in the 45th minute.

U.S. head coach Tab Ramos' side continued to attack after the break, leading to a three-goal sequence in the space of four minutes. It began when a nice connection between Rennicks and Pomykal led to Alex Mendez's 52nd  minute strike.

Trinidad & Tobago pulled a goal back when Nickell Orr linked up with Isaiah Lee two minutes later, but Ulysses Llanez answered with a measured effort off the right post to record his tournament-leading fifth goal and give the USA a 5-1 advantage in the 56th minute.

As the final seconds ticked off the clock, the USA added one more goal as Mendez slipped substitute Juan Pablo Torres through the back line to finish his first of the tournament in the third minute of second-half stoppage time.

With those results, the USA (3-0-0; 9 pts.) now sits three points clear atop Group A and could officially clinch its place in the Classification Stage on Wednesday with a win against Saint Vincent and the Grenadines combine with a draw between Trinidad & Tobago and Suriname.

Up Next: The U-20 MNT plays its fourth match of the 2018 CONCACAF U-20 Championship on Wednesday, Nov. 7 against Saint Vincent and the Grenadines. Kickoff from IMG Soccer Stadium in Bradenton, Fla., is set for 8 p.m. ET and can be seen live on UDN and the ConcacafGo app .

Goal Scoring Rundown:
USA - Brandon Servania (Justin Rennicks), 6th minute: The U.S. opened the scoring early through a nice sequence up the left. Justin Rennicks received a quick pass from Ulysses Llanez and before playing a short ball into the path of Servania. Running onto it in stride, Servania fired a low, right-footed effort from 25 yards that crept just inside the left post. USA 1, TRI 0

USA - Justin Homer (own goal), 8th minute: Continuing to pour on the pressure, the USA grabbed a second goal two minutes later. Ayo Akinola's cross from the right was poorly cleared just outside the area by Malike Mieres. Paxton Pomykal won the ball at the top of the penalty arc and played quickly for Justin Rennicks whose quick hit deflected off Homer and redirected past flat-footed goalkeeper Denzil Smith. USA 2, TRI 0

USA - Paxton Pomykal (Justin Rennicks), 45th minute: A routine ball over the top was played too casually at the back by Trinidad defender Luke Singh, whose soft touch fell straight into Rennicks' path. The U.S. forward drove towards goal before cutting a pass back to Pomykal who one-timed a low effort inside the left post. USA 3, TRI 0

USA - Alex Mendez (Paxton Pomykal), 52nd minute: Chris Gloster's throw-in was flicked on by Rennicks, giving Pomykal a free lane into the area. The FC Dallas midfielder cut back into space for Mendez who fired home from near the penalty spot. USA 4, TRI 0

TRI - Isaiah Lee (Nickell Orr), 54th minute - Trinidad & Tobago pulled one back as Nickell Orr worked down the left and pulled a nice step over before centering a low cross for Lee who redirected past Brady Scott from inside the six. USA 4, TRI 1

USA - Ulysses Llanez (unassisted), 56th minute - Brandon Servania's cross from the right was pawed away by Denzil Smith, who made a point-blank save on Pomykal's rebound. The ball rebounded to the top of the box where Llanez measured his finish, finessing his fifth of the tournament past Smith and in off the right post. USA 5, TRI 1

Key Saves and Defensive Stops
TRI - Denzil Smith, 14th minute :After Ulysses Llanez was fouled just outside of the penalty area, Alex Mendez stepped up and curled a low free kick around the wall only to have Smith make an alert, diving stop at his right post.

TRI - Denzil Smith, 25th minute :Helping to push the attack, center back Matt Real slotted a ball through the back line to find Llanez. Coming in on the left, he played across for Mendez, but Smith was quick off his line to deny the first attempt, before Mendez sent his rebound effort just past the right post.

TRI - Denzil Smith, 64th minute: Playing with his back to goal, Alex Mendez turned his defender and rifled a 25-yard effort that Smith dove to push off his right post before it was cleared.

USA - Brady Scott, 76th minute: Trying to carve more into the USA lead, Trinidad & Tobago defender Luke Singh blasted a low free kick that Scott got down to his right to put out for a corner kick.