US U20 WNT Camp Roster - October 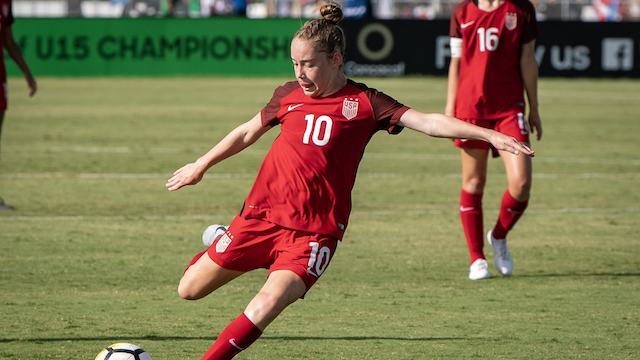 Current YNT coaches Tracey Kevins and Matt Potter will run the U-20 and U-17 camps, respectively. Both events will be held at the Elite Athlete Training Center in Chula Vista, Calif.

“With international competition right around the corner, we’re really looking forward to seeing our U-20 and U-17 USWNTs get back together on the field,” said USWNT General Manager Kate Markgraf. “After scouting players across the country in their club competitions virtually and in-person, and evaluating them at Regional ID Centers, as well as during the last cycles before COVID, these camps are a critical opportunity to bring the player pools together and familiarize them with our staff and each other. It’s an important early step to prepare for qualifying, which is coming up quickly.”

The FIFA U-20 Women’s World Cup and U-17 Women’s World Cup are scheduled for 2022 in Costa Rica and India, respectively. Concacaf qualifying tournaments for the youth world championships will be held early next year and the training camps will serve as important preparation as they jump-start the World Cup cycles.

In preparation for World Cup qualifying competition early next year, the U-17 USWNT will gather again in Chula Vista from Nov. 17-24 while the U-20 USWNT will close out 2021 with a training camp from Dec. 12-19.

The events will be held in accordance with U.S. Soccer’s comprehensive Return to Play protocols. U.S. Soccer is requiring all staff and players be fully vaccinated in order to attend YNT training camps. As a leader in the sport, the health and safety of all participants is the top priority for the Federation.

The U-20 USWNT will aim to defend its Concacaf U-20 Championship title next year after taking home a record sixth confederation title in early March 2020. The U-20s rolled to the Concacaf crown and a berth to the U-20 WWC with seven straight victories and a 44-1 goal differential.

Players born on or after Jan. 1, 2002, are age-eligible for the 2022 Concacaf U-20 Championship. As this training camp takes place during the fall NCAA season, no college players were called up. The 28-player roster includes eight players born in 2003, 19 born in 2004 and one born in 2005. Fourteen states and 21 youth clubs are represented on the roster, with the most players – 15 -- coming from California and three each playing club soccer at FC Bay Area Surf and SoCal Blues.

The lone 2005-birth year player is midfielder Olivia Moultrie, who became the youngest American female to turn pro when she signed with the Portland Thorns in early 2019. She is the only professional player in either of the two training camps. The 16-year-old Moultrie, who is also age-eligible for the U-17 USWNT, has made eight appearances for the Thorns in her debut NWSL season this year and scored her first pro goal during this summer’s Women’s International Champions Cup.

Seven players who participated in the U-17 USWNT’s final training camp before the canceled 2020 Concacaf U-17 Championship in Feb. 2020 were called up for the U-20 camp. Forward Amelia White was one of the team’s leading scorers with five goals in 2019.