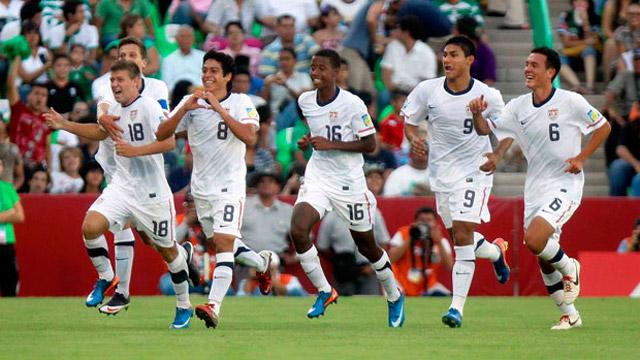 MOVING TO PACHUCA: The U.S. and New Zealand both traveled from Torreon to Pachuca, Mexico, on Thursday afternoon ahead of a Saturday clash between the two teams currently tied for the top place in Group D based on all tiebreakers. The match at Estadio Hidalgo will be played at 6 p.m. local time, 7 p.m. ET live on ESPNU and ESPN3, and shown on tape delay on Galavision at 10 p.m. ET. Czech Republic will play Uzbekistan at the same time, with that match also shown live on ESPN3. Fans can also follow the USA game as it happens on ussoccer.com’s MatchTracker and on Twitter @ussoccer_ynt.

ALL ON THE LINE: After earning a 3-0 win against the Czech Republic on June 19, the U.S. fell 2-1 to Uzbekistan on June 22, but is still very much alive in the tournament. With all four teams in Group D tied on three points through two games, everything is up for grabs on Saturday. Any team that wins on Saturday will earn a place in the Round of 16 at the FIFA U-17 World Cup in Mexico, and any team that loses might be eliminated from the competition. For full advancement scenarios, click here.

A LOOK AT THE U.S. ROSTER: Head coach Wilmer Cabrera named his 21-player roster on June 9, the day before the team traveled to Torreon to begin training. There are 15 players representing 14 different clubs in the U.S. Soccer Development Academy, with Arsenal FC the only club to send two players to Mexico in Paul Arriola and Wade Hamilton.

LOTS TO PLAY FOR: All 24 teams at the FIFA U-17 World Cup have now played two matches, but only four teams have sealed a place in the Round of 16. Host Mexico, Brazil, Germany and Uruguay are the only four teams to have won both games, and each will be playing their third match to try to clinch first place in their respective groups. With the top two teams in each group plus the four best third-place teams, every team in the tournament is still mathematically alive, but the USA’s Group D is the only group where everyone still has a chance to take the top place.

SHORT HISTORY VS. NZE: The U.S. and New Zealand have met only once before in this competition, that back in 1999 when New Zealand was the host. In the opening match of the tournament, Landon Donovan and Abe Thompson helped the USA to a 2-1 win in Auckland. That 1999 team was the only American side to reach the semifinals of the FIFA U-17 World Cup, finishing in fourth place.

NZE’S RECENT SURGE: New Zealand entered Mexico with the hopes of building upon the success of the 2009 team that became the first Kiwi squad to ever advance to the knock-out stage of a FIFA tournament. A win or a draw against the United States would all but secure a place in the Round of 16 for the second-consecutive tournament. The 2011 event marks New Zealand’s fifth overall.

THROUGH OCEANIA: In 2009, New Zealand had to only navigate a four-team final round tournament to qualify for the FIFA U-17 World Cup, but in 2011 the road became much more difficult. It took five games in 10 days to book their ticket to Mexico, the Young All Whitesconceding just one goal along the way while scoring 15.

MCINTOSH MAKING HIS MOVE: Playing an individual position in a team sport and competing for the only spot in the starting lineup, goalkeepers have an interesting dynamic when competing for playing time. Just ask U.S. U-17 MNT goalkeeper Kendall McIntosh, who has been competing for roster spots and playing time since joining the Residency Program two years ago. Every day, he and his fellow ‘keepers – who are also his competition – train together in a small, close-knit group.