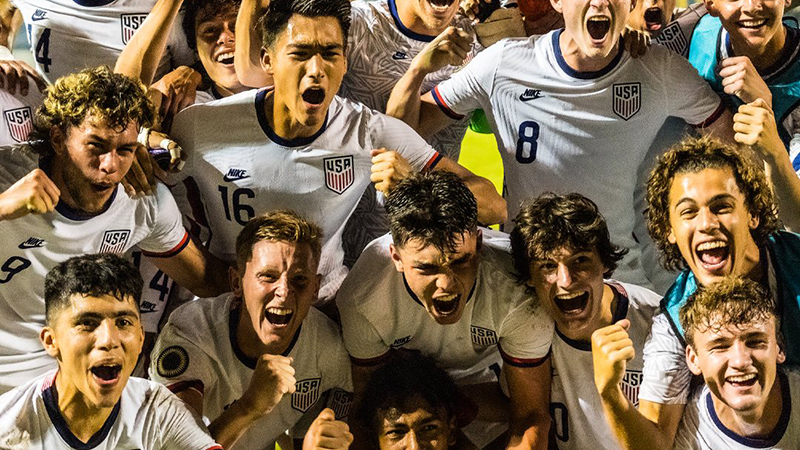 The United States Under-20 Men’s National Team capped off a dominating showing at the Concacaf Championship with another big win.

An offensive outburst of three goals in each half paved the way to a 6-0 win against the Dominican Republic, as the U.S. won a third straight Concacaf crown at this age group.

Paxten Aaronson scored two goals on the way to winning the Golden Boot as the tournament’s top scorer and Golden Ball as the best player. Noah Allen, Niko Tsakiris, Tyler Wolff and Jack McGlynn also got on the score sheet.

While the U.S. didn’t get on the board as early as the previous two games, Wolff’s 17th minute strike put the U.S. out in front in the first half. A first-time cross from Jackson Hopkins on the right side set the table for Wolff’s header from around the six-yard box.

Aaronson got his first off a corner kick. After a headed clearance found Diego Luna on the left side, he played Aaronson in behind in the penalty box. Unmarked and with plenty of time, he blasted him a 37th minute goal. Noah Allen made it a 3-0 lead just two minutes after that, as the left back lashed home a shot that deflected off a defender and into the back of the net.

Possessing a cultured left foot, McGlynn fired home a fourth with his right foot from just outside the penalty area to make it a 4-0 lead in the 53rd minute; Aaronson scored again two minutes after that, and Tsakiris added a sixth just an hour into the game.

Goalkeeper Christopher Brady was awarded the Golden Gloves to go with Aaronson’s honors. The U.S. U20 MNT finished with 31 goals scored and just two conceded during its time in Honduras.