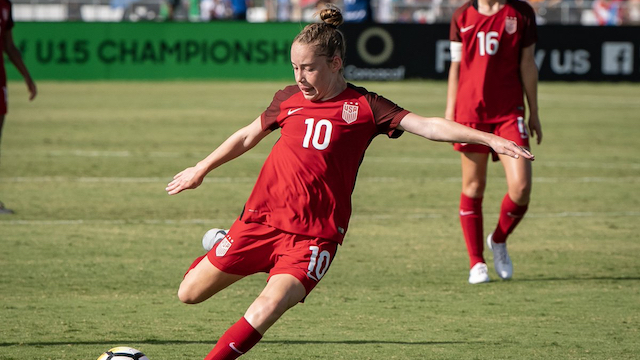 The U.S. U14 Girls National Team won the 2018 U15 Concacaf Championship on Monday. USA defeated Mexico 3-0 in the championship tilt. After 70 scoreless minutes, USA exploded for three goals in the 20-minute extra time period. Jaedyn Shaw (FC Dallas), who was awarded the Golden Ball for the event as the best player, scored twice. Alyssa Thompson (Real So Cal) scored the final goal.

USA dominated the event in 2016 and elected to send a younger squad to the competition this summer. The younger team had one setback during the run to the title with a 0-2 loss to Portugal in group play.

The team responded in the semifinal with a 3-0 win over Portugal to setup the meeting against rival Mexico in the championship game.

The two teams were even through the 70 minutes of regular time. Mexico goalkeeper Azul Alvarez, the Golden Glove winner for top goalkeeper, made a number of good saves to keep the two teams scoreless including a tremendous block in the second half on a free kick from Shaw. USA goalkeeper Teagan Wy was also excellent through the game. She needed some help in the second half when Maggie Taitano had to stop a shot off the line.

USA took over in the extra time. Juliauna Hayward started the play with an interception. She played the ball to Thompson who put the defense on their heels and then made the group off-balanced with a dazzling run from the wing to the center. She capped the movement with a delightful slip pass to Shaw. The FC Dallas midfielder tucked it past the goalkeeper for the opening goal.

USA was back on the attack minutes later. Katherine Rader hit an incredible pass into the path of Thompson. She took a touch away from a defender, but a retreating Mexico defender clipped her and Thompson drew a penalty kick. Shaw converted the shot from the spot.

Thompson put the exclamation point on top of her championship game performance with a goal in the final minutes of the second half of extra time. Hayward dished the assist and Thompson cut past the keeper and finished into the open net.

The 2016 championship team featured a number of players who went on to play key roles for the U.S. U17 Women’s National Team during World Cup qualifying and other events. This team will have a more difficult time finding the same opportunities, as the 2003 age group, which is headed to an international tournament in China, will be the cornerstone of the next U17 team. However, the impressive showing in Florida for the past week might be enough to carve out a few spots on the older age group for the standouts from this team.