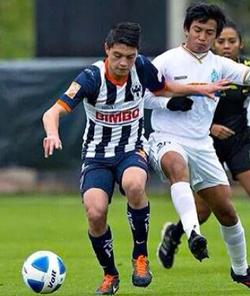 U.S. U15 Boys National Team midfielder Jonathan Gonzalez has joined Club Monterrey’s academy, his former club coach confirmed to TopDrawerSoccer.com on Tuesday. Gonzalez tweeted the news on Friday that ended the race for the services of the talented attacker from Northern California.

Gonzalez gained some attention thanks to his play with the 2013 National Selection id2 Tour team last March. His stock really took off in September when Gonzalez stole the show at the 7up Sueno Alianza event in Carson, Calif. He was invited to train at over a dozen Mexican clubs following the event.

The teenager trained with Club Tijuana (one of the clubs to extend an invite to him following the Sueno Alianza event) in October. Following that, he was part of the Monterrey U15 squad in January that competed in the Torneo Fuerzas Basicas. Rayados lost in the semifinals of the competition to Morelia. He impressed enough to earn a full-time spot at the academy.

Gonzalez is the third U.S. youth national team player to join the Monterrey youth academy – former U20 MNT midfielder Alonso Hernandez and U17 MNT striker Joe Gallardo are also at the club. Both Gallardo and Gonzalez are age-eligible for the 2015 U17 World Cup squad.

Gonzalez’s father, Alonso, immigrated to the States when he was 18 years old from Guanajuato, Mexico, according to a Soccer America article, thus making his son eligible for both the U.S. and Mexico on the international stage. Alonso told SA that his son was committed to the Stars and Stripes.

The former Atletico Santa Rosa standout has played as the attacking midfielder and on the wing with the youth national team in the past. He has good technical ability and reads the game really well. He has been a fixture in the starting lineup for the U15 BNT (1999 birth year) and likely to be in the mix with the U17 Men’s National Team in the near future.

The U15 BNT are scheduled to have a camp in Calif. in March before a rumored trip to Italy later in the spring.

Charlie Nobile contributed to this report.