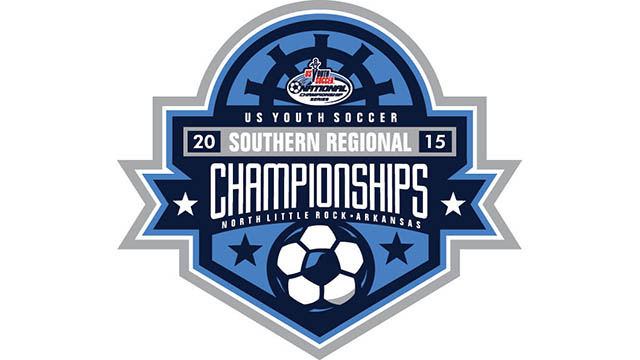 Georgia led the way with five Region III Champions, while Florida, South Carolina, North Texas and South Texas each had two and Louisiana had one. Tampa Bay United (FL) claimed two titles as a club, while Tophat SC (GA) won three Region III Championships and had one team finish as a runner-up.

“It’s extremely difficult, given the number of games, the conditions and the quality of teams that you play against. It’s very, very hard to win this title,” Tophat coach Troy Garner said of the Region III Championships. “That’s why it means so much to the kids to be called Region III Champions. They know the gauntlet you have to run to be successful.

“These kids were fortunate this week to do it. Everything came together as individual teams and as a club. We’re really happy and really proud of the success.”

# Advances to the National Championships as Region III representative. U-15 Tophat, U-16 Tophat and U-17 Tampa Bay United to represent National League

Some highlights from the Region III Championship finals…

Under-13 Girls: Albion Hurricanes 02 (TX-S) 2-0 Creeks Krush Elite (FL)
Albion Hurricanes 02 (TX-S) punched its ticket to Tulsa with a 2-0 win over Creeks Krush Elite (FL) in the Under-13 Girls final. Nicole Cybul managed to find the back of the net in the 17th minute to give Albion an early advantage. The South Texas side held off Creeks Krush, as the Florida side pushed for an equalizer. Lauren Geczik helped ease the pressure for Albion with a 55th-mintue insurance goal, and the Hurricanes held on for the shutout victory to claim the Region III title.

Under-13 Boys: SCUFC 01 Elite (SC) 1-0 Solar Chelsea 02 Red (TX-N)
An early goal helped propel SCUFC 01 Elite (SC), as it claimed the Under-13 Boys title with a 1-0 win over Solar Chelsea 02 Red (TX-N). Jordan Johnson struck quickly for South Carolina, as he finished his chance in the fourth minute go put SCUFC in front. Despite Solar’s effort to tie the game for the length of the match, the South Carolina defense stayed organized and picked up the clean sheet to secure the victory and regional championship.

Under-14 Girls: Tophat 19 Gold (GA) 2-0 Sunrise Sting 00/01 (FL)
The Under-14 Girls final featured a pair of teams in Tophat 19 Gold (GA) and Sunrise Sting 00/01 (FL) that enteredThursday with impressive several impressive results in Arkansas. Tophat managed to go in front when Hannah White found the back of the net in the 22nd minute for just the second goal conceded by Sunrise this week. The Georgia side broke down the strong Sunrise side once again in the 58th minute, as Emily Pulver found the back of the net to give Tophat a 2-0 lead. That proved to be enough, as Tophat came away with the shutout victory to punch its ticket to Nationals.

Under-14 Boys: Houstonians 2001 (TX-S) 3-2 GSA 01 Premier (GA)
A strong start to the second half helped Houstonians 2001 (TX-S) claim the Under-14 Boys title with a 3-2 win over GSA 01 Premier (GA). Following a scoreless first half, Ivan Bastidas put the South Texas side up in the 46th minute. Teammate Abdel Galaviz added a second goal five minutes later to give Houstonians a 2-0 lead, and Adrian Cedillo stretched the advantage to three goals with a 55th minute strike. GSA pulled a goal back in the 70th minute when Alex Bahr found the back of the net. GSA’s Thomas Toney quickly added a second goal, but it wasn’t enough as Houstonians held on for the 3-2 victory. GSA will continue on to Nationals as a National League Blue Division representative.

Under-15 Girls: Tophat 18 Gold (GA) 2-1 Solar Chelsea Elite 00 (TX-N)
A pair of goals from U.S. Youth National Team forward Rachel Jones helped Tophat 18 Gold (GA) to a 2-1 win against Solar Chelsea Elite 00 (TX-N) in the Under-15 Girls final. Jones lofted a shot over the keeper in the 13th minute that found the back of the net to give Tophat an early edge. The Under-17 National Team forward added a second goal five minutes later that proved to be necessary as Solar fought hard to come back. In the 49th minute, an Abigail Bancroft strike cut the Solar deficit to one goal, but Tophat held strong for the final 20 minutes to secure the victory. Solar will also advance to Nationals, while Tophat heads to Tulsa as the National League Blue Division champion.

Under-15 Boys: Dallas Texans 00 Red (TX-N) 1-0 United FA 00 Premier (GA)
Little could separate Dallas Texans 00 Red (TX-N) and United FA 00 Premier (GA) in the Under-15 Boys final, as the two sides needed overtime to decide the winner. A physical game was managed well by both back lines, as the game went to overtime in a scoreless tie. Late in the first overtime period, the Texans’ Calum Sutherland found the back of the net to give his side a vital lead. That proved to be the difference, as the Texans held on for the 1-0 victory to claim the title. United FA will also continue on to Nationals as the National League Blue Division runner-up.

Under-16 Girls: Tophat 17 Gold (GA) 6-0 99 Lady Lobos Rush Premier (TN)
Tophat 17 Gold (GA) finished an impressive week with a 6-0 win Thursday against 99 Lady Lobos Rush Premier (TN) in the Under-16 Girls final. Delaney Erwin started the scoring for Tophat with a fifth-minute goal, and she added a second later in the half when she hit home a rebound after a sprawling save from the Lobos keeper. Caroline Orman made it 3-0 before halftime with a shot from distance that dipped under the bar. Erwin added a pair of second half goals, and Amanda Baker scored once to help cap the Georgia side’s 6-0 victory. Lobos Rush will also advance to Nationals, while Tophat heads to Tulsa as the National League Blue Division champion.

Under-16 Boys: CESA 98 Premier (SC) 3-2 (3-1 PK) Houston Express (TX-S)
The Under-16 Boys final needed a penalty kick shootout to determine the winner between CESA 98 Premier (SC) and Houston Express (TX-S). Houston led for much of the early portion of the game after Samuel Adeniron netted a sixth-minute goal. CESA worked hard and leveled the score in the 53rd minute on a Dean Sinatra header. Quinn McNeill added a go-ahead goal for CESA just a minute later, but quickly equalized the score with his second tally of the game. After a scoreless overtime, CESA snuck in its final penalty kick attempt off the left post to win the shootout, 3-1, and claim the Region III title.

Under-17 Girls: Tampa Bay United 97 Premier (FL) 3-2 Tophat 16 Gold (GA)
Tampa Bay United 97 Premier (FL) overcame a two-goal second-half deficit to take the Under-17 Girls crown with a 3-2 win against Tophat 16 Gold (GA). Grace Jackson dribbled through traffic and hit a low drive past the keeper to put Tophat in front in the 24th minute, and Taylor Meneide doubled the lead with a strike just before halftime. Tampa Bay, the 2014 National finalist, pulled within one in the 50th minute when Olivia Ross-Johnson found the back of the net. Samantha Betters then equalized for the Florida side in the 63rd minute, and Elizabeth Wissman netted an 89th-minute winner as Tampa Bay complete the comeback to win the Region III Championship. Tophat will also advance to Nationals, as Tampa Bay heads to Tulsa as the National League Blue Division runner-up.

Under-17 Boys: FC Dallas 98 Premier (TX-N) 3-1 FC Alliance 98 Black (TN)
A quick start helped propel FC Dallas 98 Premier (TX-N) to a 3-1 win over FC Alliance 98 Black (TN) in the Under-17 Boys final. Gerber Chavez netted a ninth-minute goal for FC Dallas, Matthew Gonzalez found the back of the net four minutes later to give the North Texas side an early 2-0 lead. Chavez netted a second before halftime to push the advantage to three goals at the break. FC Dallas held Alliance in check until Lucas Altman scored a 90th-minute goal to make it 3-1. That score line held, as FC Dallas came away with the victory and punched its ticket to Tulsa.

Under-18 Girls: 97 Louisiana Fire Navy (LA) 4-1 AHFC 97 (TX-S)
For the second time in three years, 97 Louisiana Fire Navy (LA) are the Region III Champions. The Fire defeated AHFC 97 (TX-S), 4-1, on Wednesday to claim the Under-18 Girls title. Cadie Higginson headed in a fifth-minute corner to put Louisiana in front, and Eleanor Pratt doubled the lead with a well-struck shot that glanced off the keeper’s finger tips before finding the net. Just before halftime, Alexandra Thomas netted her seventh goal of the week to push the Fire advantage to 3-0. Kirsten Diaz pulled AHFC within two goals with a tally early in the second half, but Martha Jane Williams later pushed Louisiana’s lead back to three goals as the Fire hung on to take the Region III title.

Under-18 Boys: NASA 15 Elite (GA) 6-2 FC Dallas 97 Gold (TX-N)
Several late goals helped NASA 15 Elite (GA) pull away in a tight match with FC Dallas 97 Gold (TX-N) to win 6-2 and take the Under-18 Boys title. It took just seconds for FC Dallas to grab a 1-0 lead, as Emmanuel Kiwele converted a shot from distance. NASA’s Cal Jennings responded in the 10th minute by hitting home a loose ball in the box to level the score. The Georgia side went ahead on a Jad Elkhalil strike in the 39th minute and Jennings made it 3-1 with a 72nd-minute tally. Mark Trompeter pulled FC Dallas within one when he flicked his 86th-minute attempt inside the post, but Jad Arslan reestablished NASA’s two-goal advantaged with a composed finish just two minutes later. Elkhalil and Jennings each added late goals for NASA, as it claimed the Region III title. Jennings finished with 13 goals to lead all players.

Under-19 Girls: Tampa Bay United Premier (FL) 2-1 BUSA 96 (AL)
Under-19 Girls Tampa Bay United Premier (FL) quickly overcame a deficit against BUSA 96 (AL) to post a 2-1 victory in the Region III final and earn a spot at Nationals. A promising start by BUSA resulted in an early lead for the Alabama side as Jean Moffitt struck for a 19th minute goal. However, Tampa responded quickly and pulled back even when Debra Hahn found the back of the net. Just three minutes later, Abigail Sanchez hit a looping header inside the right post to give Tampa the lead. Hahn’s tally proved to be the difference, as Tampa held on to the slim advantage and walked away with a 2-1 victory.

Under-19 Boys: GSA 96 Premier (GA) 3-0 TSCH 96 Nsien (OK)
Defending Region III Champion GSA 96 Premier (GA) is heading back to Nationals thanks to a 3-0 win over TSCH 96 Nsien (OK) in the Under-19 Boys final. The Georgia side took a 27th minute lead on a strike from Trenton Whitely. GSA doubled the lead when it produced some good buildup play that resulted in an Aigbekan Nosegbe tap-in at the far post in the 64th minute. TSC pushed its players forward and produced some good looks at goal, but GSA iced the game with a Brahan Gamarra tally just before the final whistle. The 3-0 win sends GSA to Tulsa for another chance to play for the James P. McGwire Cup after the club came up just short of the raising the storied trophy in 2012.