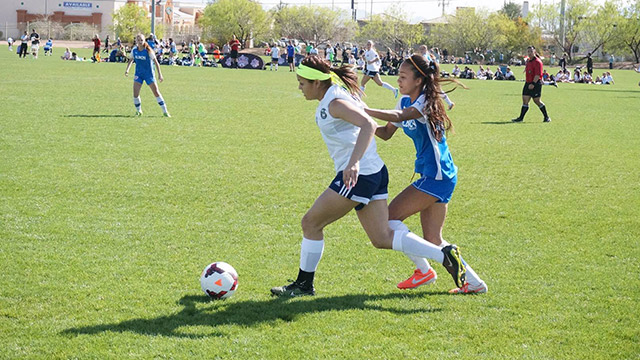 Day two of the US Youth Soccer National League Players Showcase at Bettye Wilson Sports complex saw dozens of college coaches and scouts mulling about the property assessing and evaluating prospects. While there were strong individual performances that likely left coaches from Stanford, USC, Harvard, Iowa State, Northwestern and more impressed- the theme for Saturday was ore about how teams played well together.

U15 Legends FC 99 vs Penn Strikers

Legends FC 99 (5-0-1) came into the game against Penn Strikers (2-2-2) with a perfect record of 5-0, knowing a win would clinch a U15 Red division title. Penn wasn’t going to roll over, and battled Legends from whistle to whistle to earn a 0-0 tie.

Penn keeper Kamryn Stablein put on a show in the early morning hours at Bettye Wilson Sports Complex, holding a Legends team that came in averaging more than two goals per game without a score. Around the 25th minute, Legends began firing shots at Stablein from all angles, and Stablein’s diving deflections came one after another. Often, an initial shot would get Stablein out of position temporarily, and Legends had an opportunity to capitalize, but couldn’t put the ball in the net. On one occasion, Legends’ Alexis Rushlow fired a shot on Stablein that she dove in front of and deflected out left of the goal, where Janae Lee was waiting, but her shot flew over the crossbar.

Penn Strikers best opportunities to score came in the last five minutes of the first half.  Both Kayla Mesaros and Avery Cotter had chances to score that were deflected away, and Emma Weirich’s corner kicks weren’t able to find their mark, making the score and even 0-0 at the half.

In the second half Penn’s communication on the field became intense as players encouraged each other to front the ball defensively and take more chances on offense. Penn Defender Sierra Granata came forward and took a shot of that missed, and Penn’s Jamie McInroy followed with an unsuccessful shot of her own. Legends’ last chance to score came on a late throw in from Emily Knous, but Stablein plucked it out of the air to preserve the tie.

Albion started strong, with Aleska Marr nearly scoring on a header, and Jordan Patane missing on a shot that went straight to Dynamite’s keeper. Dynamite had an early attack of their own come up short when Sarah Kelly found Ida DiClemente streaking left in front of the goal. DiClemente was able to quickly halt her dribble, change directions, and shoot a ball over the right corner of the goal.

Dynamite was the first to put a goal on the board when Albion keeper Katelyn Carter attempted to dive on top of a ball that was rolling across the goal box, but two defenders collided in front of her, and Carter missed the ball, leaving Samantha Rosette in front of an empty net, with the ball. Rosette was able to tap the ball in and give Dynamite a temporary 1-0 lead that would hold until the 38th minute, when Albion’s Cassidy Overstreet tied the game up on the break.

The second half had a different feel, as the teams spent most of the time in transition instead of offensive sets, and neither side was able to control the ball. When the game did slow down, it became extremely physical- most notable between Dynamite’s forwards and Albion’s defenders. Early in the second half, a foul was called inside the box, giving Dynamite’s Shannon Burns a penalty kick. Burns snuck the ball to the left of Katelyn Carter, and Dynamite would hold on to win the game 2-1, but not before some pushing and shoving resulted from Dynamite attempting to run clock by trapping the ball in the corners and bodying Albion defenders away. Both teams enter Sunday play with an opportunity to take third place in the U17 Blue division, with Dynamite needing at least a tie, and Albion needing a Dynamite loss and a win of their own.

YMS Premier Xplosion 98 (4-0-2) came from behind to take a second half lead vs Arsenal FC-S Bowers (2-1-3), only to have Arsenal score late and secure a 2-2 final. YMS stays alive in the hunt for a U16 Blue division title, needing a win on Sunday to overtake Tophat 17 Gold.

YMS started aggressively, attempting a shot just after the opening kickoff, and pressuring the Arsenal defense for the first five minutes of action. YMS couldn’t keep up their own frenzied pace for long, and Arsenal’s Danielle Clark took advantage by gaining possession, dribbling up the right side of the field and crossing the ball to a waiting Emma Vanderhyden for a goal in the 9th minute. Arsenal’s 1-0 lead lasted nearly 15 minutes, until YMS keeper Danielle Samson made a diving save that defender Caroline Foley cleared upfield to spur a possession that ended with a Murphy Agnew game-tying goal.

At the start of the second half, the game was tied 1-1, but YMS continued to pressure the Arsenal defense, and in the 48th minute, Andrea Amaro brought the ball all the way down to the right baseline and crossed the ball over her defender’s head to a waiting Maddie Elwell, who just had to let the ball deflect off the outside of he left foot and roll into the net. The 2-1 YMS leads lasted until Danielle Clark was given another opportunity to bring the ball down the field, and when defenders collapsed on her, she found a streaking Isabella Bowers for the tying score. The tie gives Arsenal sole possession of fourth place in the U16 Blue division, and gives YMS an opportunity to win the division outright with a win over Andromeda on Sunday.