The College Cup is here in the area this weekend. The CASL Showcase is also going on, hosting teams from all over the country.

Just about every DI coach and a lot from lower divisions are in the area as well. 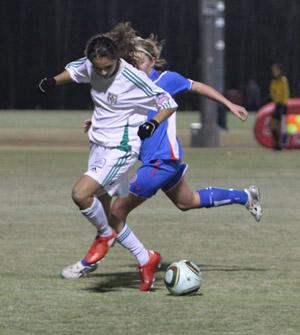 U17 Mclean vs. Internationals
Thursday night’s competition was the U.S. Youth Soccer National League, and there were easily more than 100 coaches on hand watching the games in four age groups here.

We dropped by to catch a pair of matches as temperatures here plummeted from comfortable daytime conditions.

The last time we caught Clyde Watson’s Mclean Strikers, they were playing in the U.S. Youth Soccer National Championship at Kansas City in the U16 age group. The day ended in disappointment for this talented group, but it’s a team that likes to play the game the right way and that was on display Thursday night. Central midfielders were spraying the ball around. Forwards and wingers were moving into space and combining passes and off-the-ball-runs. Defenders were keeping things tight and starting the attack quickly with smart distribution forward.

Goalscorers for the Virginia club in their 4-0, U17 win over Internationals included Sharon Wojcik, Lina Granados, Kara Wilson and Tabitha McHale.

{mosvideo:350}On the next field over, Jim Wipke’s JB Marine U16 team defeated GSA Phoenix 3-2. This St. Louis-area team also likes to play with the ball on the ground and they did so effectively on the frosty night.

After GSA’s Anna McClung scored from a scramble in the early going, JB tied the game with a goal from Jade Klump, set up by Haley Kavanaugh. Early in the 2nd half, Klump went from scorer to provider, giving a good pass to Hannah Leinert, who scored to make it 2-1 for JB Marine.

Courtney Silberberg came close with a free kick that GSA goalkeeper Mallory Sayre pushed away. Klump and Leinert were a really dangerous combination in attack for JB, and Kavanaugh showed great close control on the ball and likes to run at defenders. She earned a corner that JB scored its third goal on, when Jamison Wipke sent in a serve and Alexis Boschert managed to knock it in from a scramble.

Colin Chapman’s GSA team then got back into the offensive flow. McClung, Rachel Garcia and Taylor Donahue each came close with shots, but Abby Rowan kept the ball out for JB. Garcia connected on a 25-yard drive that cut the lead to 3-2, but JB held on for the win.