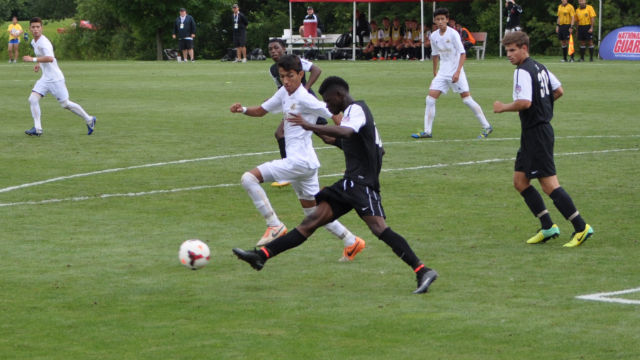 BOYDS, Maryland — The latest edition of the U.S. Youth Soccer National Championships has come and gone, with seven champions crowned last weekend within each age group.

Below is a look at the boys Best XI from the U14 through U18 age groups.

GK Isaac Hernandez, Pateadores U15: It was a competitive field of teams at the U15 age group, but Pateadores stormed to a title thanks in part to a big 5-1 win in the championship game against state rivals United FC. Hernandez and his Pats side conceded just three goals across five games.

D Cale Thorne, Baltimore Celtic SC U16: An imposing center back for a Celtic team that ran all the way to the title, Thorne demonstrated his quality at both ends of the field. Along with helping keep Emmanuel Dapaa to just a single goal in the championship, Thorne netted an extra time winner in the semifinals to advance to the title game.

D Kamar Marriott, FC Dallas U17: Along with his imposing play in defense, Marriott was a threat from set pieces, scoring twice during the week in Maryland. While he was obvious to spot from his size, he was nimble and quick at the back, and distributed the ball well.

M Jack Harrison, Manhattan SC U17: Smooth and silky on the ball, Harrison was one of many bright talents on a Manhattan SC side that did just enough to triumph in the U17 title game.

M Geoffrey Acheampong, Santa Barbara FC U18: The UC Santa Barbara(m) verbal commit showed well for his hometown club. While he had the tendency to drift in and out of games, Acheampong was the creative conduit to an offense that scored 13 goals in five games, including five each for Joseph Hernandez and Miguel Padron, who were both in the running for the Best XI.

M Nelson Flores, Arlington SA U14: A creative No. 10 for Arlington, Flores was all over the place in the Arlington midfield. A technical midfielder with a good burst and passing vision, he scored two goals during the week and created several chances in each of his side’s games.

M Charlie Wehan, United FC U15: One of the most impressive midfielders on display at the National Championship, Wehan looked the part. An attack-minded central midfielder, he scored big goals as well as set up scoring opportunities for his teammates on the way to making the final.

F Emmanuel Dapaa, Ohio Premier U16: Hands down the most exciting player to watch in Maryland, Dapaa scored eight times across four games (he missed the first game) including two hat tricks and a sensational free kick to tie the title game 1-1, which eventually ended on penalty kicks.

F Angel De Leon, Pateadores U15: Top scorer in his age group, Pateadores clinched its title thanks to one of its finest performances of the week, topping United FC 5-1. De Leon scored five during the five games, including a brace in the semifinal and the opener in the final, showing up at the right place at the right time in the box to score.

F Sergio Lara, FC Dallas U17: His age group’s Golden Boot winner with seven tallies – one shy of the highest mark on the boys side – Lara finished goals in just about every way imaginable: poaching, a nice free kick, rounding out an impressive stretch for the Dallas forward.