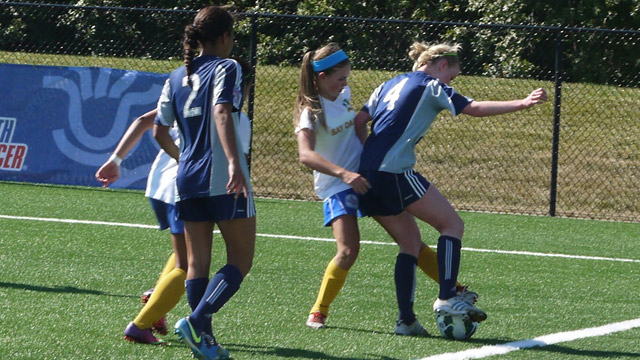 The second day of games for the US Youth Soccer National Championships kicked off Wednesday morning. Below are highlights from the U15 and U16 Girls brackets.

Eclipse started out hot, and would continue that way for the remainder of the game. They had a couple scoring chances in the first five minutes, both of the shots going just over the crossbar. Eclipse worked the ball well, always playing the feet and making clear, concise passes. 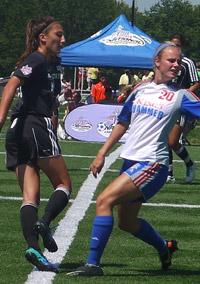 But Tennessee SC wasn’t going to let Eclipse take the game easily. TSC’s defense held strong, making the Eclipse forwards work to get through. TSC’s offense also had a couple good scoring opportunities in the first half. In the 21st minute, forward Karlie Paschall broke through the defense, but stumbled with the ball and couldn’t get a good shot off.

Eclipse ended the half frustrated, with four scoring opportunities in the last eight minutes not resulting in a goal. This frustration must have fired them up at halftime though, because they started the half strong, scoring two goals within the first 12 minutes. It was then TSC’s turn to be frustrated, not being able to get anything in the back of the net until one minute left in stoppage time, when they were able to sneak one by.

That one goal wouldn’t be enough, and Eclipse Elite came away with the win. Both teams will have a well-deserved day off, and continue competition on Friday. Eclipse Elite will play Boise Nationals Italia, and Tennessee SC will face MSC Coyotes.

The first 13 minutes of this game were characterized by each team struggling to get through the last line of the opposing team’s defense. After those initial minutes, it was an Ambassadors game.

In the 14th minute, Ambassadors’ Olivia Sency was able to break through the defense and get a shot off. The shot was initially deflected by the goalie, but teammate Alexandra Wright was there to blast the ball into the back of the net. It would be Wright with the goal again two minutes later on a breakaway.

The girls will resume competition on Friday. Empire Revolution will face Carlsbad Elite at 7:30 a.m., while Ambassadors will face Tampa Bay United also at 7:30 a.m.

These two California teams we’re a perfect match. An early goal by Bay Oaks set the bar, and the competition was fierce. Both teams worked the entire field, passing clearly and fighting with everything they had.

The Sharks equalized at the beginning of the second half, with a beautiful cross by Franzisca Komar that bent into the top right corner of the net. With the momentum from the goal, the Sharks put their play up a notch and pressed the Bay Oak defense. In the 52nd minute, Hailey Harbison set up the perfect ball across the box, and Gianni Montini made it a goal with a diving header.

Bay Oaks had a couple of chances off of set plays in the 70th minute, but it was the Sharks who maintained majority possession and would win the game.

The match up between Kings Hammer and Match Fit Colchesters would be pretty even throughout the first half. Both teams had equal scoring opportunities, but it was MFC who was able to sneak one by for a goal. The play would continue to be equal until into the second half.

In the 61st minute, MFC GK Colleen Brennan received a red card on a challenge, causing MFC to play down for the remainder of the game. Kings Hammer would capitalize on this advantage, scoring in the 72nd minute, when MFC defense pulled up, hoping to catch Kings offside. Bayley Feist was left wide open for a through ball, which she put into the top corner of the net.

It was looking like the match would end in a draw, when forward Lauren Nemeroff was able to get one in the net off of a deflection in the last few minutes of stoppage time, giving Kings Hammer the win.

Kings Hammer Academy will face 97 Louisiana Fire Navy at 11:30 a.m. on Friday, while the Colchesters will play Toms River FC Elite United both teams will kick off at 11:30 a.m.