Comments
The 2011 U.S. Youth Soccer National League on the girl’s side will resume next week after taking a break from play earlier this month.

Teams from U15 to the U17 age groups will reconvene at the ESPN Sports Complex from December 31 to January 2 in Orlando, Florida, to play their last games of the league play.

There are five groups on the girl’s side with eight teams in each group. One is for the U15 age group, while there are two separate groups for the U16 and U17 age groups each. 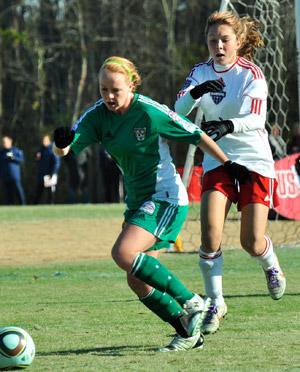 U17 McLean Strikers vs. Empire United
After four games played and three remaining, here is a breakdown on how the standing looks going into the end of the month.

In first place, only one point ahead of second, Maryland club SAC United is in the driver’s seat to win its age group. The team’s  remaining three games are against the three bottom teams on the table, Grand Rapids Crew Juniors Gold, Arsenal Elite, and Braddock Road YC Elite.

Florida-based Brandon FC Flames and Dallas Texans will be battling to win the league going into the weekend tied with 10 points apiece.

Offensively, Brandon FC has a bit of an advantage with three players in the top scorers’ chart. Taylor Decaire, Shea Roney, and Taylor Meek have been on fire combining with 8 goals in four games.

On the other hand, Dallas Texans have an advantage in the defense only allowing one goal coming into Florida.

Both these teams will face each other for their last game and it will be interesting if both teams go into it undefeated.

Since one team has to remain standing at the top, the advantage has to go to Hurricane FC over Legends Breakaway. With four players with multiple goals, Kristen Killion, Elizabeth Keeser, Madison Saliba, and Claire Kelley, they have torn through opponents scoring 10 of Hurricane FC’s 12 goals so far.

This table is wide open here. Even though St. Louis leads the pack with 9 points, Buffalo Soccer Academy, Toro Bravo, and NASA Elite are chasing with 7 points each.

St. Louis will take on Toro Bravo in the last day of league play. Toro Bravo will carry more pressure because if they slip on its way to that game, it’ll have no chance to gain the first place slot.

Coming with a perfect record, Dallas Texans sit atop of the leader of the table. The duo of Kelsey Shimmick and Mary Alissa Lonsberry have helped Dallas sit ahead of second-place NSA Premier Fury by two points.

The Illinois-based club has yet to face Dallas, so it still has a chance to leapfrog the team to first place if they keep composure in this latter stretch of the season.
Headlines
Club Rankings HQ
View all rankings >>