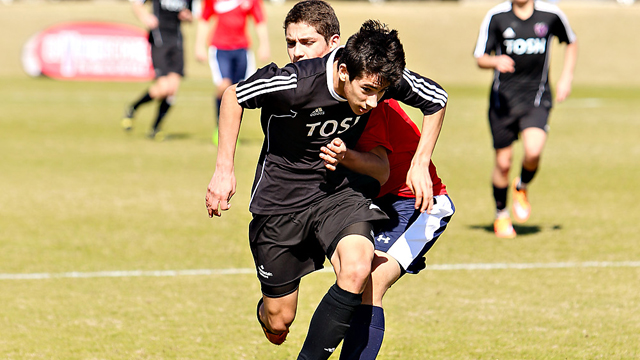 The ODP Championship semifinals took place out at Reach 11 Sports Complex in Phoenix, Arizona on Friday, and there were some dominant performances to set up exciting championship games on Sunday March 1st. Here’s how the boys’ half of the action played out.

Utah defeated Michigan in the 1pm matchup by securing control of the ball for a majority of the game. The first goal went into the net off of a throw in from Easton Embley that took a single bounce before the wind spun it into the top left corner. After the half, Michigan had trouble keeping possession of the ball, which allowed Utah to have countless chances. Michigan’s goalkeeper Benjamin Kole was excellent despite being constantly under pressure. After half, Luke Madsen sent a great ball to Benjamin Gonzalez for a finish to give Utah a 2-0 lead. Michigan responded with a quick goal from Alexander Spratte to cut the lead in half but it was too little too late. Utah moves on to face Virginia on Sunday for the ODP championship.

Virginia dominated from the opening minute, putting tons of pressure on the Georgia backline. Virginia outshot their opponent 13-7. Edison Giron created two goals for his teammates, Jacob Barrette and Nelson Flores Blanco to help them achieve an early 2-0 lead. In the second half, Virginia continued their domination with another goal from Alejandro Moldanado-Romeo. Giron added a goal of his own before the final whistle. Virginia can look forward to continuing their impressive offensive performance Sunday in the championship round against Utah.

Cal South and Florida battled evenly in the first half of play. California Southern started the game with a goal from Francisco Lara after several tight passes that came inside the box. Florida responded in the next minute with a goal by Morgan Vraspir, assisted by Steven Saunders. After this flurry, Cal South controlled the game. A goal from Milo Barton gave them the lead and Cal South never looked back. Billy Garton helped Cal South control the pace of the game and keep possession of the ball for long periods of time, and George Sanchez added a goal near the end of the game to give Cal South a two goal victory. Cal South will face Iowa in Sunday’s championship match.

This was the most entertaining match of the day. The tempo was fast and the action remained consistent throughout the entire game. Iowa got off to a quick start with a goal from Alex Anderson in the fifth minute. Seven minutes later, Iowa was able to score again. Mark Histed was able to was able to capitalize off a goalkeeper miscue and bury the ball in the back of the net. Pennsylvania West had double digit shots on goal, including one that went off the crossbar, but was unable to convert, or keep Iowa’s offense from striking again. In the second half, Antonio Sanchez broke away from the defense and was able to score a goal following a long run with the ball, sealing a victory for Iowa and setting up Sunday’s championship matchup against Cal South.