USA blown out at U17 World Cup 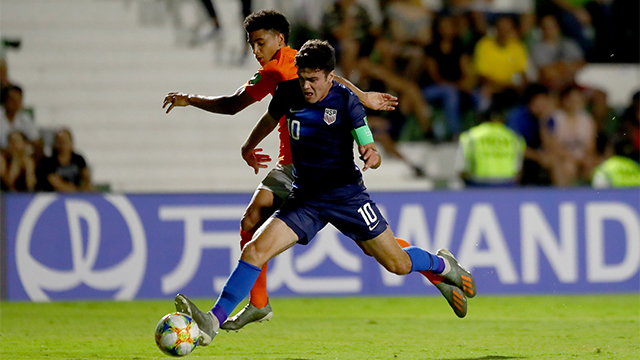 Facing a win-and-advance scenario at the Under-17 World Cup, the U.S. lost by a 4-0 score to the Netherlands in the final group match in Brazil.

Two goals from Sontje Hansen on either side of the half would’ve been enough for Holland, as the U.S. failed to score a goal since the third minute of the first game of the World Cup. Holland tacked on a third from Mohamed Taabouni to round out the scoring.

Head coach Raphael Wicky made two changes from Wednesday’s 0-0 draw against Japan, starting Giovanni Reyna in place of an injured Ricardo Pepi; Tayvon Gray returned to the lineup after serving a red card suspension against

It was a stronger start from the United States than in the previous match against Japan, at least from an offensive perspective. Reyna flashed a header wide in the opening minutes, and midfielder Adam Saldana volleyed wide from a cleared corner kick.

There were a couple of other opportunities fashioned on the break by the U.S., including a ball over the top for Reyna, but the move fizzled out when the ball found Andres Jasson at the top of the box.

Hansen eventually opened the scoring in the 42nd minute, ghosting into space on the left side of the U.S. defense, beating Chituru Odunze with a low, driven shot.

Down a goal and in need of a win, Wicky made two subs at the half. Bryang Kayo came in for his first minutes of the World Cup, replacing Saldana. Alfonso Ocampo-Chavez entered for Ethan Doebbelaere. Kayo nearly made an impact, hitting the ground running and nearly forcing a chance in front of the Dutch goal.

But after the early chances fizzled out, Hansen got his second goal of the game in the 52nd minute. Anass Salah Eddine got the ball into space, and his cut back found Hansen on the right side of the box, who scored his second of the game.

With the U.S. pushing forward looking for a way back into the game, Holland hit again on the counter attack in the 70th minute. Mohamed Taabouni finished off a move that started with a quickly taking free kick at the top of the U.S. box. It would have been worse as well, if not for a penalty kick stop from Odunze in the 78th minute after Kayo clipped a Holland attacker down in the box.

The Dutch would eventually get their fourth goal in the 86th minute, thanks to Jayden Braaf.