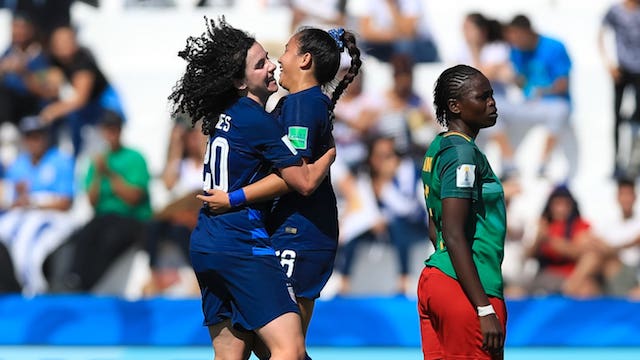 The U.S. U17 Women’s National Team began the 2018 U17 Women’s World Cup with a 3-0 win over Cameroon on Wednesday. Mia Fishel and Sunshine Fontes recored goals in the first half, and Fontes added her second in the second half.

It was not much of a memorable performance from the USA side. They struggled to put the game away despite a two-goal and a player advantage in the second half - and a two-player advantage for the final 10 minutes of the game. The lack of goals scored might come back to haunt the USA in a tough group with games against Korea DPR (Nov. 17) and Germany (Nov. 21) upcoming.

USA head coach Mark Carr trotted out a fairly familiar starting lineup, as the group has been together for some time in the lead-up to the event. However, USA looked pretty nervous in the first 15 minutes of the game.

Fontes nearly erased the rocky start with a finish in the sixth minute, but she was slightly offside on the chance. Cameroon controlled where the game was played for much of the opening half. The Lionesses had some confidence and did well putting USA under pressure in the defensive third.

The game broke open for USA in the 22nd minute when Mia Fishel finished off a chance off a broken play. Fishel benefitted from a down defender in the Cameroon box keeping her onside, and she made the most of the chance. When her initial shot was blocked into the post, Fishel hammered home the rebound for the opening goal. Cameroon’s patience with the referee was already running thin with the referee prior the goal, and the play left the players and coaches shouting at the official after they felt there was a foul in the center of the field prior to the goal.

The referee was in the spotlight again on the second goal. Christemilie Onomo, the Cameroon goalkeeper, took out Maya Doms with a flying karate kick to the stomach. The rebound fell to Jordan Canniff, but she hit the post with her shot. The referee blew the play dead after the shot, and after a brief discussion with the far assistant referee, USA was awarded a penalty kick and Onomo was shown a red card. The ejection was indisputable, but the Cameroon coaching staff took exception to the penalty kick as the foul appeared to happen a yard or two outside of the box.

Sunshine Fontes, the all-time leading scorer at the U17 level for USA, converted the shot from the spot for her first goal of the game.

Cameroon did not have many chances in the first half, but Makenna Morris made the defensive play of the game when she blocked two shots off the line in the 33rd minute.

USA went into the break up two goals and with a player advantage. While it seemed like a recipe for USA to run away with the game, it did not play out the way on the field. Angelina Anderson, the USA goalkeeper, was credited with six saves in the second half after only being called into action twice in the first half. The numerical advantage for USA resulted in more chances for Cameroon.

USA never looked comfortable in the game - in either half. It could have been the opponent - Cameroon did a good job at fouling Sophie Jones whenever USA started to find a rhythm in the build-up - or the playing surface - the slick turf snagged a few bad touches, but the group struggled to connect many passes or get the game to a pace that would suit the strengths of the collective group.

The insurance goal came in the 81st minute when Fontes beat the offside trap and chipped the goalkeeper from 30 yards out on an impressive shot. USA had a number of other chances prior to Fontes goal including Payton Linnehan’s shot, which struck the bottom of the crossbar but somehow stayed out of the goal.

Overall, it was not a strong showing from USA. There is definitely work to be done with this group to get them to the level of competing with the teams in the knock-out rounds. However, they accomplished the goal for the day and now have three days to figure out a plan for how to match up against Korea DPR.