USA qualifies for U17 World Cup 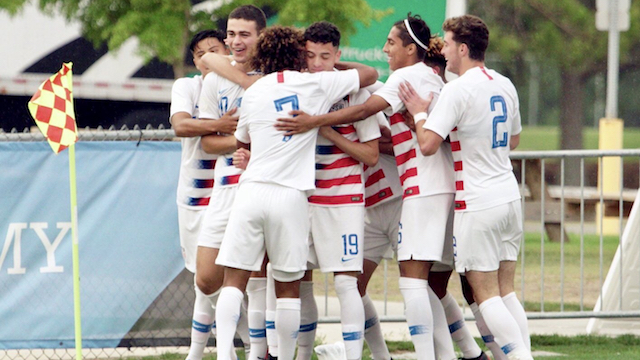 The U.S. U17 Men’s National Team clinched a spot at the 2019 U17 World Cup on Sunday. USA defeated Panama 3-0 in the quarterfinals of the 2019 Concacaf U17 Championship and secured one of the four berths to the World Cup for the region.

Sporting Kansas City’s Gianluca Busio scored the opening and winning goal in the second half. Seattle Sounders’ midfielder Daniel Leyva started the play when he won a duel in the midfield, spun away from a defender, and then played the ball into forward Alfonso Ocampo Chavez. The target forward passed it off to Busio who beat the last defender with his first touch and then placed the ball past the goalkeeper for the opening tally.

USA doubled the lead minutes later when Ocampo Chavez was hacked down in the box. Giovanni Reyna converted from the spot.

USA put the game away in the 75th minute with the third and final goal of the game. Substitute Ricardo Pepi added a burst of energy to the game and was rewarded for his work with a goal. The goal was a glimpse into the game, which USA bossed from the opening kick-off. Kobe Hernandez-Foster controlled a long clearance from Panama. He passed the ball to goalkeeper Damian Las.

Las, who used his feet more than his hands on Sunday, showed good composure and waited until his team had a shape before he played it out. The sequence ended with Las playing it to Adam Saldana, who was outstanding on Sunday, who found Leyva and then Pepi.

USA was building up to this all game - dominated possession of the ball and then clinically sliced apart Panama once they were tired. U17 MNT coach Wicky has done an excellent job. Here is the 11-pass sequence prior to Pepi's goal. pic.twitter.com/ZrM7QLNT3P

Sunday’s win was the most important game from the competition. With all four of the semifinalists advancing to the World Cup, the quarterfinals were the do-or-die fixtures. USA took care of work in the crucial tilt. U.S. dominated possession in the first half and then punished the tired legs of Panama in the second half. Panama never really threatened the net and finished the game with only one shot.

The U.S. was organized, disciplined and played intelligent soccer. If this is any indication of head coach Raphael Wicky’s ability, there is reason to be optimistic about this group on the international stage. They’ve been increasingly better with every game at this competition as he has spent more time instilling his style.

USA still has a game or two left in the regional competition. USA takes on Canada in the semifinal on Tuesday. The winner advances to the final on Thursday.