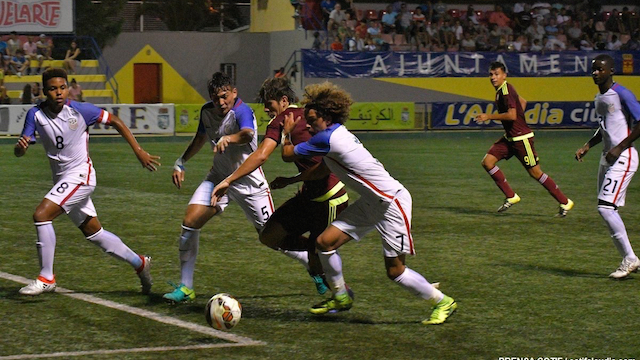 It was a big collapse on the global stage for another U.S. boys youth national team on Monday.

The USA only needed a win from the final game of group play at the 2016 C.O.T.I.F, a youth international tournament in Spain, in order to qualify for the semifinal round of the event.

A first half tally from German-American Kevin Lankford off a cross from John Nelson put the U.S. into the driver’s seat toward a place among the final four.

However, the U.S. could not hold onto the lead against Bahrain, a country of 1.3 million people that is located in the Persian Gulf. Two goals from Bahrain attacker Abdulaziz Khalid put the U.S. in a big hole in the second half en route to an eventual 3-1 loss that knocked the U.S. out of the tournament.

A lack of experience on the international stage or in a professional environment exposed some nerves on the U.S. side while trailing, and Brad Friedel’s group compounded the errors by conceding a third to Khalid in the 64th minute.

Down 3-1, the U.S. went all out for the final 16 minutes of the game, but the lack of composure or creativity in the final third resulted in only one chance in the latter stages of the game. Striker Brandon Vazquez hit the crossbar on a free kick from 25 yards out, which was the best chance of the second half for the U.S.

The game ended under much worse circumstances as well. Bahrain, which is set to host the Asia qualifying event for the U20 World Cup in 2017, had been persistently chipping the U.S. players throughout the game. In stoppage time, the nuisance turned to violence when Husain Jameel blasted the ball off of Pierre Da Silva’s head from only a few feet away after the USA winger had been tripped by another Bahrain player. The incident sparked both benches to join the fracas on the field.

Red cards were awarded to USA midfielder Hugo Arellano and Vazquez, who both joined the fight to defend Da Silva. The cards are inconsequential as the USA exits the tournament after compiling a 2-2 record at the event and finishing fourth in the group at the U20 event.

U.S. started the spell in Spain with a 0-2 loss to Venezuela, where Friedel’s side struggled with the conditions of turf in the stadium and hardly connected any passes throughout the 80-minute game. However, the group improved in the 1-0 wins over Mauritania and Spain, and looked to be rounding into form prior to Monday’s loss.

The disappointment of the final game will leave a sour taste in the mouth of the players, who were hoping to impress the coaching staff as they fought for a shot with the U.S. U20 MNT side during the qualifying process for the 2017 U20 World Cup. The up-and-down nature of the results and the quality of play from the U.S. side in Spain will likely leave U20 MNT head coach Tab Ramos without much to think about from this squad when he assembles his roster for future events.