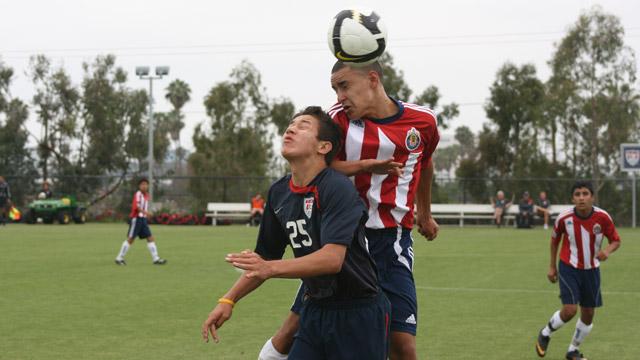 CARSON, California – The U.S. U14 Boys National Team Camp ended on a most positive note on Saturday, when the young group put their week-long lessons into practice for a final pair of scrimmages.

Coach Manny Schellscheidt called the 38 players into the Home Depot Center hoping to see improvement from the team’s previous gathering while continuing to find a core of stars that will become staples of the U.S. Soccer program for the next few years.

On both counts, Schellscheidt said the week was a success. 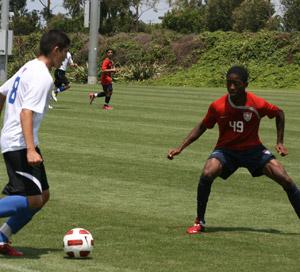 U14 BNT vs. Chivas USA
“There were a number of guys that have done well throughout the week and that’s what you’re hoping for,” Schellscheidt said. “There will be players added along the way – kids that we don’t have out there that step up in the next years and look special. But I’m comfortable with the improvement I saw this week.”

The final scrimmage results on Saturday included a 9-0 drubbing of the U14 Pateadores squad and a 2-0 loss to U15 Chivas USA.

Schellscheidt was hoping his squad would be challenged by an older Pateadores side in the first match and the even-aged opponent resulted in a pretty one-sided match.

Stephen Elias recorded a hat-trick, Malcolm Dixon scored twice while Alexander Knox, Christian Ramirez, Benjamin Swanson and Mukwelle Akale all netted goals in a rout that displayed just how exceptional the U.S. U14s are in comparison to their peers

Swanson enjoyed a solid second half for his team and the U.S. group dominated possession and won all of the individual battles.

Against the Chivas squad, however, the U14 team had its hands full with a speedy and cohesive unit. Chivas was precise in its combinations, shifting the angles of attack and moving quicker to the ball. Chivas scored both of its goals in the first half before the U.S. side settled in and competed better.

“They were fast and they had a lot of combinations,” said Guillermo Bermudez, who proved one of the top U.S. defenders all week. “We moved the ball more and found combinations in the second half. We didn’t score, but we found something.”

The positive signs for the U.S. included Kostandin Moni, who was a big presence in the defensive midfielder. Tommy Redding is a tall and smooth defender who is good in the air and can stop the ball.

Striker Amirgy Pineda showed one of the best work rates on the field – pursuing the ball and creating positive plays for his team.

Midfielder Collin Fernandez was also solid, and created some of the team’s better chances.

Time will tell which of the players will be back when Schellscheidt calls in the U14s for their final meeting of the year in June.