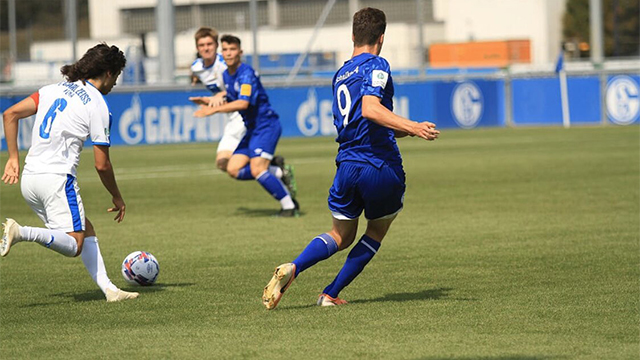 This past weekend saw the resumption of the Germany A-Junioren Bundesliga after the winter break. That meant several young Americans were back in action in competitive games – and several had influential moments on the field.

Forward Matthew Hoppe bagged the second goal of the game for Schalke A-Junioren, which defeated Arminia Bielefeld by a 2-0 score. Hoppe, who signed with Schalke instead of playing college soccer at San Diego State last fall, has five goals in 16 games in all competitions.

He wasn’t the lone U20 eligible player to tally for his team. FC Ingolstadt’s Jalen Hawkins bagged his team’s second goal of the game as well, securing a 2-2 draw against Eintracht Frankfurt with a second-half strike.

Earning the nod for Bayern Munich A-Junioren squad, Taylor Booth assisted on Malik Tillman’s goal, Bayern’s second of the game in a 2-1 win.

Other Americans in action for their respective U19 sides:

U.S. U17 World Cup veteran Maxi Dietz came off the bench in the 78th minute for SC Freiburg, helping them secure a 3-0 win against Karlsruher SC. Ian Hoffman entered in the 61st minute on the losing side.

Noah Jones entered as a 77th minute sub for RB Leipzipg in a 7-0 victory against Chemnitzer FC.

Quincy Butler started and played 69 minutes for Hoffenheim, which lost 3-2 against FC Heidenheim.

Leon Flach wore the captain’s armband for FC St. Pauli in a 1-1 draw with Hertha Berlin.

Christopher Richards was in action for Bayern Munich II, playing the duration of a 1-0 win against Hansa Rostock in the 3. Liga.

After uncertainty lingered about the future of Konrad de la Fuente at Barcelona, the U.S. U20 winger was back in the mix and in the squad for FC Barcelona B over the weekend. De la Fuente entered the game in the second half, scoring the winner on a counter attack with FCB down a man.

Jonathan Tomkinson continues to play up an age group, and took the field on Friday for Norwich City U23s. They did taste defeat by a 2-1 score against Manchester United, as Tomkinson played the entire game and picked up a yellow card.

It was a comfortable outing for Peter Stroud and the West Ham Under-18 side on Saturday, which cruised to a 5-1 win against Arsenal. Stroud earned the start and played the duration of the victory.

Goalkeeper Damian Las enjoyed a similarly successful outing in a Yank-on-Yank clash. Las started in goal for Fulham U18s, which defeated Augustus McGiff and Reading by a 4-1 score. McGiff was pulled in the second half after his team

While it’s unclear what Dante Sealy is officially doing at PSV, the U.S. youth national team forward/winger got into action in an Under-19 friendly last week, scoring a goal for the Dutch club. Sealy doesn’t turn 18 until the summer of 2021, which could keep him from being transferred abroad, unless he has a passport that opens the door up earlier.

Both Americans officially on the books at PSV, Chris Gloster and Richie Ledezma, were back in action on Friday. The duo started and played 90 minutes in a 3-1 loss against MVV Maastricht. Two days prior to that match, they both trained with the first team.

Alex Mendez’s string of starts came to an end for Jong Ajax, although the midfielder was tabbed for a 40-minute shift from the bench. With his side up by a 3-0 score at the time, Ajax grabbed two more goals on the way to a 5-1 victory.