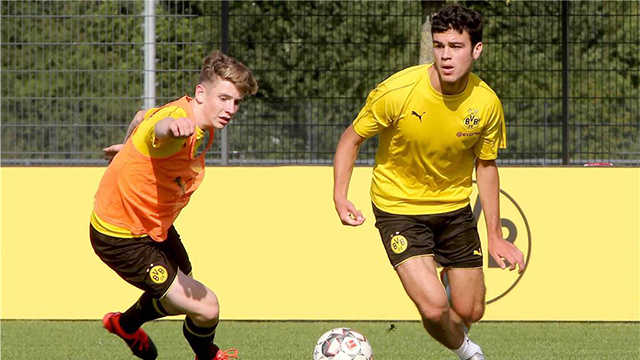 The 2019-20 European season approaches, which is a big time for the scores of Americans plying their trade across the pond.

For the younger Americans, it’s about finding the right club where opportunity meets their ability as they look to climb the ladder at their respective clubs.

Below is a preview of the Americans on the books at academies in Germany and England. Players that are already expected to be in first team plans aren’t included.

The highlight of this group focuses on a new talent in Germany: Giovanni Reyna. A surprise inclusion in Borussia Dortmund’s tour of the United States, Reyna has neither dazzled nor fizzled during his stints on the field with the BVB first team. However, barring an injury crisis or massive step forward, Reyna’s time in Germany will begin with the Junioren-A team (U19) at Borussia. What’s worth watching is his inclusion with the U.S. Under-17 MNT at the World Cup, as team won’t be obligated to release him.

Staying in the Ruhr Valley, Matthew Hoppe is a newcomer at Schalke. After tearing up the Development Academy the past two seasons, Hoppe jumped at the chance to join the team and will suit up for the Under-19s as well. Fellow American Nick Taitague can show him the way, as he’ll look to finally stay healthy for Schalke II and earn a first team nod.

U.S. Under-20 World Cup veteran Ulysses Llanez starts the season with the Under-19s, as he’ll look to provide attacking thrust from wide areas at Wolfsburg. If he can produce, a first team debut won’t be too far away. That’s also the target for defender Michael Edwards. Earning a chance to play with the first team during preseason, it hasn’t been smooth sailing for the Virginia native, who was sent off in a preseason friendly. If he can’t crack the bench for the first team, he’ll have a chance to be a part of the Wolfsburg II squad.

Speaking of center backs and Under-20 World Cup standouts, Bayern Munich’s Christopher Richards awaits his chance. A first team spot may not be as far away as it might seem, despite the fact that the center back missed a bit of preseason with a small knock. Bayern’s reportedly turned down loan offers and enquiries from other clubs, and if Richards can seize his chance he could at least make his Bundesliga debut in 2019-20. Also on the books at Bayern Munich, the Under-19s is where Taylor Booth will start, as the 2001 remains eligible for the youth side.

Breaking through at newly-promoted Aston Villa seems like a long shot this season for Indiana Vasilev, the midfielder who spent the bulk of 2018-19 playing for either the U18s or U23s. Barring a loan move to another team, he’ll look to work his way through at the Premier League club.

Going the other way this past season are longtime Fulham players Luca de la Torre and Marlon Fossey. Both are listed on the team’s Premier League 2 side at the moment, and the latter hasn’t seen any action during preseason.

U.S. Under-17 goalkeeper Chituru Odunze made the move to Leicester City this past week. Formerly with the Vancouver Whitecaps Academy, Odunze is likely to start the season with the club's Under-18 team.

While the first team futures of both Andrew Gutman and Manny Perez are difficult to decipher at Celtic FC, U.S. forward Cameron Harper remains on the books and in the plans for either the reserve squad or the Under-18s. Harper scored a goal in mid-July in a friendly with Celtic's reserves and could see minutes there this season.