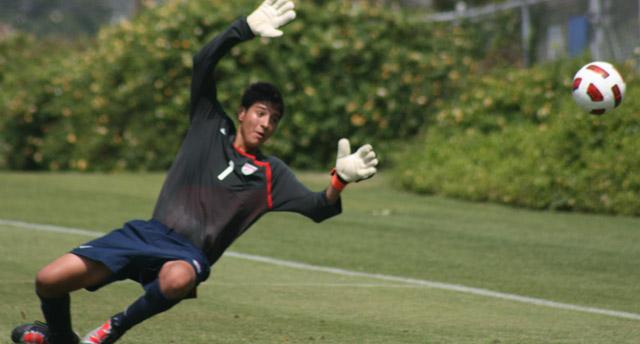 CARSON, California – One has 13 pins and two plates in his left elbow; the other carries a name that reverberates throughout the soccer world.

Christian Herrera and Jonathan Klinsmann are two of the more interesting cast members of a goalkeeper group that features six players this week at the U.S. U14 National Camp.

If that sounds like a lot of keepers, that’s because it is. But this week’s roster is larger than usual so it makes sense that the crowd is a little more handsy than we’re used to. 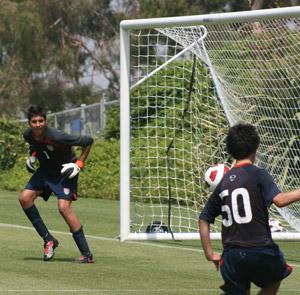 Christian Herrera
Count Herrera and Klinsmann – the only two of the bunch who were not a part of last month’s U14 gathering - among those happy that it is.

Klinsmann, that would be the son of German great Jurgen Klinsmann, is making his first ever appearance in camp in what’s been a major highlight for a kid who has seen a lot in his young career.

“It’s been a really great experience,” Klinsmann said. “When I got the first email and call, I got really excited but at the same time I was really nervous because I knew it would be really intense and competitive here.

“I’ve always wanted to be here and train with these guys, and the last three days I’ve become a better goalie.”

While Klinsmann isn’t old enough to have watched his father during his heyday as one of Germany’s premier strikers, he did spend some valuable time in Germany while Jurgen served as the manager for Bayern Munich from 2008-09.

Klinsmann was able to develop through the club’s system while facing the ultimate competition. Now he’s ready to do the same here in the States.

For Herrera, this week marks his return from an injury-induced layoff. Herrera fractured his elbow during a match early this year and was forced to sit out for five months.

His time on the sidelines included last month’s U.S. U14 camp when his fellow campers took the field without him.

“It was really, really tough,” Herrera said. “It brought me down a lot knowing I could not be here. I was worried (I may not be called back to the next camp) but it was amazing when I got the call.”

At 6-foot-2, Herrera is by far the tallest player in camp and he’s rangy in goal. But all of the keepers are quality shot stoppers, including the 5-foot-11 Klinsmann.

Each will be put to the test this week as coach Manny Schellscheidt has said he will focus on attacking and goal-scoring.

Tuesday’s training was in line with that focus. The team spent a good deal of time working on crosses as well as 2v1 scoring opportunities.

The team will get its first test tonight when they take on Chivas USA and Arsenal FC in the first of six total scrimmages this week.