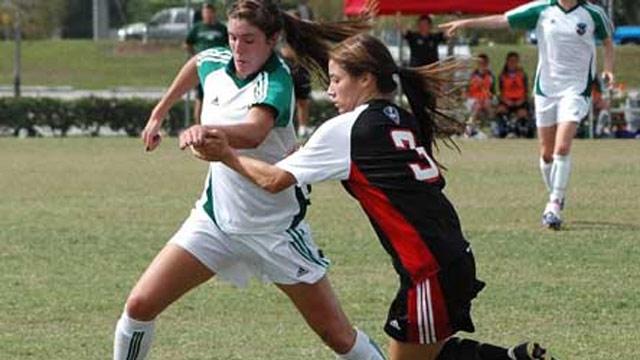 BOCA RATON. FLORIDA – High school sophomores or not, a swath of college athletic colors still dominated the near sideline at the U.S. Youth Soccer Girls ODP Interregional here Monday, as college coaches examined playing talent from across the country in the 1995 age group.

Some coaches even took in some of the games going on with the 1996 age group. Since we can’t be in more than one place at a time, you’ll have to wait until Thursday for our reports of games involving 96s. Today it’s the 95s from the four regions in our spotlight.
Region III 95s 2, Region II 95s 1

Claire Wagner was good in the back line for the Region III squad, which is coached by Samford head coach Todd Yelton.

Madisson Lewis of Michigan Hawks scored a late goal for Region II after being put through on goal by a good pass from St. Louis Scott Gallagher’s Lauren Knight.

In overcast conditions, Matt Potter’s westerners battled back from a 2-0 halftime deficit to play to a 2-2 draw. Penn Fusion’s Kendal Robino put Region I on top 1-0 with a well-placed free kick from 30 yards. The shot was struck low and with pace, and snuck inside the near post for the opening goal.

Century United’s Veronica Latsko runs well with the ball, while Region IV’s Darian Jenkins of  Sparta Premier is quick in the attack. Alyssa Alarab of Mustang Blast covers well as an outside back. Breakaway SC’s Nicolette Martino was very active in showing for the ball for Region IV. She tracks back well and makes intelligent runs in the forward third. Albertson Fury’s Amanda Rooney is a tough two-way midfielder.

Region I doubled their lead right before halftime as PDA’s Caroline Chagares cut inside from the left and rolled a ball into the path of HBC’s Zoe Clark, who hit a good strike from the edge of the area to make it 2-0 at the break.

A mistake in the back allowed Region IV forward Emily Bruder to pounce and her cool finish made it 2-1. Slammers’ Kayla Mills ripped a shot from 30 yards through the goalkeeper’s hands to tie the game at 2-2. Region IV and Avalanche outside back Mikayla Elmer showed a lot of tactical awareness in making intelligent attacking runs and always being in the right position defensively. On the other side of the back line in the 2nd half, Madison Hall of Colorado Rush exhibited good speed and the ability to put in a timely, effective tackle.

Dorian Bailey scored a late winner to lift the Region II 96s to a 1-0 win over their Region III counterparts. The Region I 96s defeated Region IV 3-0 on goals from Amber Stearns, Taylor Kugler and Sabrina Flores.

Play resumes tomorrow with the 93s and 94s, including U15 National Teams from the U.S. and Norway, back at it.