Oliver Harris, Crew Soccer Academy Wolves
Commitment: Verbal to Notre Dame for the 2013 season.
Reason:“I chose Notre Dame because I was amazed by the chemistry amongst the players and coaches. They accepted me in a way no other college team had. To me, it felt like a place I could call home for the next four years.” 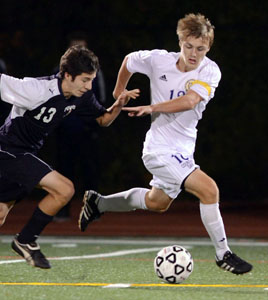 Harris, who is British, is versatile enough to make any soccer field feel like home. He’s currently in the midst of a fantastic summer that has seen him perform especially well at the Development Academy Playoffs where he helped guide his Crew Soccer Academy Wolves to Finals Week.

Two years ago, Harris was able to go to England where he trained with the Derby County U16 team for a week and played against the likes of Nottingham Forest FC and Birmingham FC. It’s an experience he still references as a turning point that improved his quality.

Now he’s a polished midfielder who is on the verge of joining the Irish.

Reason: “I’ve always wanted to go away from Tucson for college so when I started narrowing down my search I was looking for a school that had the right mix of athletics and academics. Sam Houston has a lot to offer. I want to study architecture and found an Industrial Design program at Sam Houston that will give me a good foundation. Plus, they have some great athletic programs, making it all the way to the FCS National Championship game in Football last year and to NCAA Regionals in Baseball this year. Under coach Tom Brown, the Women’s Soccer program is really going to make some noise!"

Shields is an attacker who thrives at making passes that lead to scores. She also has a strong throw-in and is a fierce competitor who will enjoy the challenge of the next level.

Virginia Reeves, So Cal Blues
Commitment: Reeves let us in on her verbal to Colorado last week, but further explained her 2014 commitment.

“I chose Boulder because it was just an all-round perfect fit for me,” she said. “I love the atmosphere and the location, and now that it’s a Pac-12 school it was an easy choice.”

Reeves, ranked No. 88 in our 2014 Top 150 List, was so sure of her selection that she only visited one other campus before making her decision.