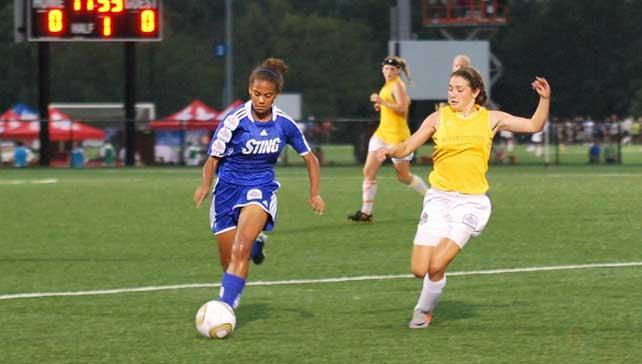 OVERLAND PARK, KANSAS – It was a great setting for soccer here Saturday night.

You had the beautiful Overland Park Soccer Complex, five U.S. Youth Soccer National Championship matches going on at once, a great turnout from the local soccer community, and a gorgeous sky created in the aftermath of a lengthy thunderstorm delay.

The matches were pretty good too.

In the end, the U14 and U15 Boys’ titles were shared by one teach from the four U.S. Youth Regions. Maryland side Baltimore Bays (U15 Boys), Chicago-area club Eclipse Select (U14 Boys), Texas side Dallas Sting (U15 Girls) and Northern Californians MVLA Lightning (U14 Girls) came out on top. Columbus Crew Juniors (Region II took the U19 Boys title in front of a national TV audience to complete the evening’s proceedings. 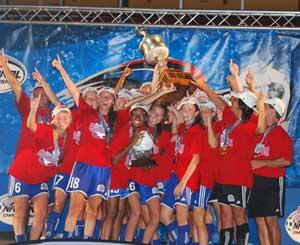 U15 Dallas Sting hoist their trophy.
U15 Girls Final: Dallas Sting 1, Scorpions SC 0
Tatu’s team finished its quest to win two national titles in a week, beating Scorpions in a hard-fought final on the strength of a goal from Maddy Crabtree.

Crabtree knocked home a rebound from a hard shot hit by Katelyn Mountjoy in the 23rd minute to provide the margin of victory. The team also won the inaugural ECNL national title last week in Seattle.

The Sting back four of Kendall McKnight, Meagan McCullough, Natalie Calhoun and Morgan William were excellent all night, providing good cover for goalkeepers Miranda Larkin (1st half) and Marleigh Essler (2nd).Glory Williams was a stalwart in the center of the field, helping Sting retain an advantage in possession for much of the match. She also made a key play to run down Scorpions’ Lauren Berman from behind after the latter had a breakaway from stealing a pass at midfield.

Larkin made a good save on Scorpions’ Samantha Alves in the 1st half, and Essler did well to keep a drive from Brooke Sweeney out in the 2nd. Scorpions’ goalkeeper Bridget Conway made some good saves on the evening too

Lauren Berman was good in an attacking role for Scorpions, and put pressure on the Sting defense with some good runs and shots. Left back Samantha Alves also played a strong game for Fred Marks’ Scorpions team.

“Our team has a huge heart. We didn’t make it last year and we knew we had to this time because this is the last year Tatu is going to be our coach,” she said. “We knew we needed to do it for him and we didn’t. There is not a doubt in my mind that we wouldn’t have gotten here without him. Not at all.”

U15 Boys Final: Baltimore Bays 2, Albion SC White 1 (OT)
Christian Porras scored the winner in overtime with a well executed turn and shot to give Brandon Quaranta’s team the title. Bays’ goalkeeper Matthew Sanchez made a leaping save in the closing minute off a header from a corner to keep the match from going to penalties.

Raul Martinez had put Noah Gins’ Albion side up early, but Romilio Hernandez equalized for Bays shortly afterward.
“Quaranta noted his team scored and gave up more goals this week than it is accustomed to, something that played a bit on his heartstrings. But he credited the team for buying into the system of his coaching and the club structure.

“Overall in the tournament we scored 11 goals and gave up 8, so range of emotions is exactly the way to describe the last four days,” he said. “We brought in 8 new guys at the beginning of the year. We had some growing pains at the beginning with them getting used to how we’re playing. I told them ‘Stay together. We’re going to get better as a team. We’re going to work hard and improve in every area. Trust me, we’ve done it three years in a row and trust the way we do things at the club.’ About midway through the season they bought into everything we did and this is the result.”

U14 Girls Final: MVLA Lightning 0,  Dallas Sting 0 (MVLA wins on penalties)
Jacquelyn Caginia made the key save in post-match spot kicks and then  converted the decisive penalty herself as Erin Montoya’s team finished off a top drawer performance with a win in the championship match over a hard-battling Sting side.

U19 Boys Final: Crew Juniors 1, FC DELCO 0
Tyler Pollock scored a 1st half winner for Crew and Justin Luthy made some key saves in recording a shutout in goal.