What do you give the team that has it all?

Like the many titles that stock their trophy room, the U18 PDA Tsunami ECNL girls own the top spot in our TeamRank New Jersey region – for now. 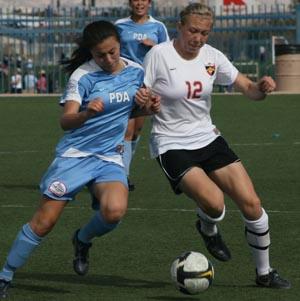 PDA is a force to be reckoned with.
It’s easy to see why: they’re defending ECNL national champions and their focused on adding the word “defending” to that distinction.

“That’s kind of the focal point of our club and our team,” said U18 coach Mike Gould, of an ECNL crown. “The great thing about this group is I’ve never had to generate any motivation. That’s what makes them special, whether it’s the middle of winter and we’ve just been hit with a massive snow storm, they’re asking if they can go out and work on things.”

The deep and talented group includes midfielder Danielle Colaprico, a U.S. National team pool player; Daphne Corboz is another vital player in the middle while Amanda Flugstad-Clarke plays the kind of dependable soccer that can sometimes go unnoticed.

They have it all, yet they want more.

PDA dominates this week’s New Jersey TeamRank rankings – the U15 PDA Slammers, U16 PDA Celtic and U17 PDA Charge all sit in first place. In U14, Match Fit Academy FC top the list.

On the boys’ side the first-place teams include: U14 Ironbound Elite, U15 PDA McGeough, U16 PDA Harkes, U17 Marlboro SC and U18 Parsippany SC.