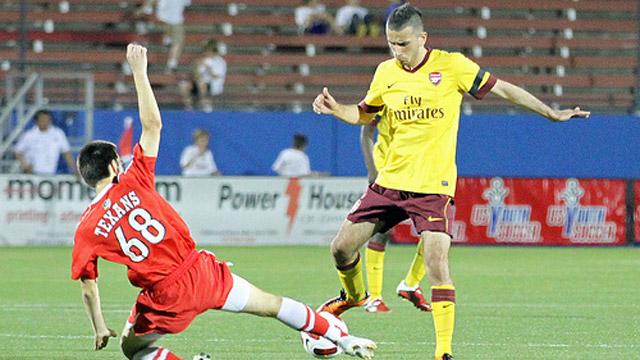 The first game involved Real Salt Lake AZ against Tigres of Mexico with the Mexican side winning 3-1 behind goals from Oscar Montoya, Moises Orozco and Karhim Gattaz. Tigres started the game on the right foot, using a flowing attack down the wings against the RSL defense captained by Julio Alarcon.

Tigres hit the post twice in the first half before opening the scoring in the 33rd minute. Victor Garza, a player who has spent time with the US U20’s, sent a wonderful ball to Oscar Montoya who headed past Eduardo Fernandez in goal for RSL.

Real Salt Lake AZ came out with fire in the second half, tying the game through a great individual effort from Nicolo Muniz driving a hard shot to the right of keeper Ismael Ruiz. RSL would take their foot off the gas after that, however, letting Tigres retain possession and it eventually came back to bite them. 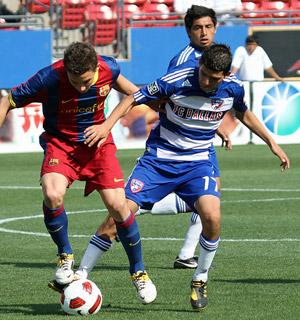 Barcelona vs. FC Dallas. Photo courtesty Pablo Serna/Anres Photography.
In the 75th minute, after a nice Tigres buildup, Karhim Gattaz hit a right footed shot past Fernandez to give the Mexicans the lead. They would double their lead late in the game through a penalty kick from US U20 International Moises Orozco after a rash tackle from Phanuel Kavita.

The second game of the day saw the FC Dallas U18 Academy, first place in the USSF’s Texas division, take on Spanish giants Barcelona. It was all Dallas from the opening whistle as the older, bigger FC Dallas squad with four of their professional homegrown players defeated Barcelona 3-1.

Daniel Garcia nearly opened the scoring in the 18th minute as a David Robledo ball freed him down the left side, but his effort was snuffed out by Pol Busquets in goal for Barca. Dallas opened the scoring soon after as a lightning quick FC Dallas counter attack led by Bryan Leyva found Garcia again with a perfect chance. His shot rocketed against the crossbar, but fell to Ulloa whose through ball to Jonathon Top beat the offside trap. Top scored easily to the keepers’ right.

Dallas would double the lead in the 32nd minute as a Eduardo Cortes goal kick was misplayed by the Barcelona defense allowing Jose Perez through on goal. Perez held off a couple of defenders and scored low to the keepers left to give Dallas a shock 2-0 lead.

Again it was Leyva, Top and Garcia in the middle of things for Dallas in the second half as Leyva found Top at the top of the box, his chipped ball freed Garcia in on goal and he would make no mistake to put FCD up 3-0.

Barcelona would make a furious comeback late in the game, however, as Boyd Okwuono would concede a penalty late in the game which would be converted by David Babunski. Barca would seemingly score a second goal just minutes later, but it was called back for offside and from there FCD would score a tremendous 3-1 victory.

In the nightcap of the tripleheader, Dallas Texans took on Arsenal in the English Premier League U19 team’s first ever trip to the United States. With the Texans down to 10 men, Arsenal would impose their will in the second half winning 5-1 behind three second half goals. 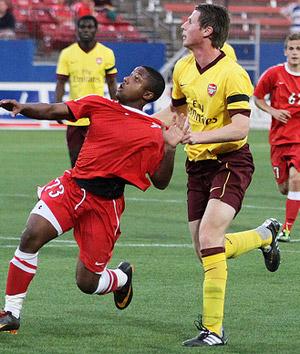 Arsenal vs. Dallas Texans. Photo courtesy of Pablo Serna/Anres Photography.
Playing a mix of reserves and youth players, Arsenal was heavy favorites, but it was Dallas Texans who started the brighter team. Offensive midfielder Caleb Richardson was everywhere for Texans and in the 9th minute he latched on to a long ball and was seemingly taken down by the keeper. No call was made, prompting jeers from the heavily pro-Texans crowd of over 10,000, but Dallas would soon take the lead.

A free kick was sent to midfielder Aaron Simmons at the back post who headed across the box. In the ensuing scrum, Eduardo Aranda tapped home to put Dallas Texans up 1-0 on Arsenal.

The English side would begin to take control after that, however, and in the 41st minute they would make that control count. Simmons of Texans was called for a handball and the ensuing free kick was bent in brilliantly by Arsenal midfielder Conor Henderson to tie things up.

Arsenal would crush Texans hearts right before the half as “Ozzie” Ozyakup played a nice ball down the right side to Roarie Deacon who would slot home from close range to give Arsenal a 2-1 lead right before halftime.

The game would change completely early in the second half as Richardson was shown his second yellow card putting Texans down to ten men. From there it was easy for Arsenal as they would score three times in the second half with a goal from Luke Freeman and two goals from sub Josh Rees to put an emphatic scoreline on a game that was much closer.

Check back each day for more feature match coverage and full results (all age groups) from the 32nd Dallas Cup.