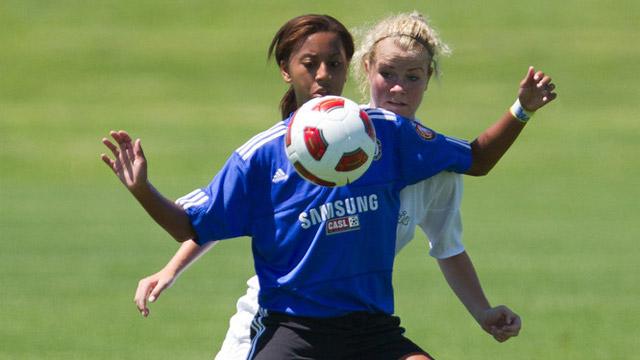 AURORA, COLORADO – As good as the first day matches were here Thursday, the intensity managed to ratchet up a notch here Friday.

That’s because the day featured semifinal matches in the ECNL National Championships, and with a chance at national glory just a day away, players and coaches alike were in no joking mood at the fields.

Short tempers and refereeing disputes aside, the matches were again good, even as teams searched for ways to deal with growing fatigue in the warm summer conditions.

Following are details of a pair of feature matches. Scroll down for full Friday results.

The early part of this match had a lot to do with Slammers’ speedster Kayla Mills. Mills has great pace and some soccer in her feet as well. She put the Southern Californians up 1-0 in the early going, taking a good pass from Lauren Guerra and finishing with aplomb. Mills followed with a run down the left and nearly doubled her team’s advantage, shooting just wide.

Lonestar slowly got back into the match. Katherine Uhler and Mason Everett hit some good serves from out wide and Mikaela Harvey was causing some issues with her running on the ball through the middle. Slammers were still dangerous though and Chloe Watson hit a good shot that Lonestar goalkeeper Katie Turner had to stretch to keep out. MacKenzie Cerda also went close, her shot after a good wiggle move tipped onto the bar.

In the 2nd half, Harvey made a weaving run through the Slammers’ defense before shooting wide. Jessica Johnston then hit a cross from the right that eluded the goalkeeper, but the ball went off the crossbar. Alexis Urch played a ball for Quinn Zulkowski, whose long lob went just over the Slammers’ goal.

Slammers nearly connected with a good passing play between Bryce Watts, MacKenzie Cerda and Lauren Guerra, but the latter’s shot was saved from point-blank range by Lonestar’s Turner, and the rebound was somehow scrambled wide.

Time was running short and Lonestar were  pressing frantically to equalize. Uhler rounded the keeper and hit a shot toward goal but Slammers’ defender Sierra Krenik made a vital intervention. Moments later the Austin, Texas side was awarded a corner that Slammers’ players and coach Walid Khoury vehemently protested. Uhler hit a ball into the area and it appeared the Southern Californians had a chance to clear, but didn’t, and the ball fell to Lonestar’s Chelsea Jackson who rifled a shot into the back of the net to level the match at 1-1.

Lonestar kept coming forward. Harvey played a good pass for Jackson but the shot went wide. Then Christyna Pitre, who had impressed with tough tackling throughout, hit a cross from the right that Jackson flicked on, setting up Uhler for a perfect strike that gave Lonestar the win.

Both Walid and Ziad Khoury had words with the match officials after the conclusion of the match. A noticeably happier Lonestar coach Rob Ferguson had the following comments about his team’s win.

Lonestar will now play Carmel United in an intriguing final.

The  North Carolina side had survived a wild quarterfinal game with Michigan Hawks, but looked very fresh and relaxed in the opening half of this match. Joanna Boyles scored from the penalty spot and then added another with a long-range effort that squeezed under the goalkeeper.

Boyles was solid in midfield, as was her teammate Caroline Brown, whose passing and defensive tenacity were especially good on the day. Alexis Shaffer added offensive punch with some weaving runs through the defense. CASL’s Paige Reckert was also good on the ball.

FC Virginia looked outmatched in the opening half but got back into the game as the 2nd half moved on. Corinne Giroux had a strong match in the back line for the Virginians. Midfielder Alex Myers hit a long free kick off the top of the crossbar, and also began causing CASL problems with some good off-the-ball running. CASL goalkeeper Taylor Francis was up to all challenges until late in the 2nd half when Murielle Tiernan hit a good cross from the left and an on rushing Sarah Hardison headed home to make it 2 -1. FCV forward Marchelle Davis was also making things happen with some good running, but Francis and the rest of Damon Nahas’ CASL side held on for the win and the berth in the finals vs. Real So Cal.

Here’s what Nahas had to say afterward.