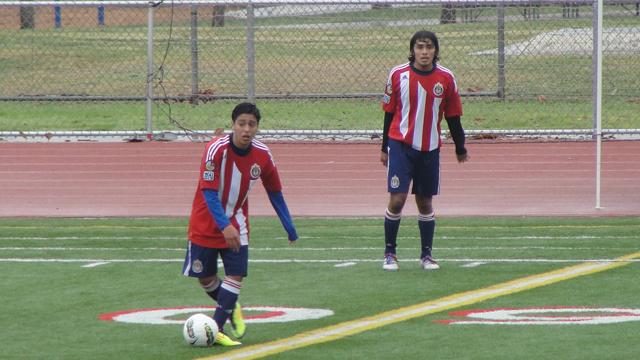 PASADENA, Calif – Esteban Rodriguez and Ben Spencer each scored two goals in the opening 20 minutes, and the Chivas USA U18 team cruised to a 4-2 victory over Vancouver Whitecaps on Saturday.

In the afternoon game, Whitecaps U16 forward Brody Huitema found the back of the net three times in a 3-1 victory for the visiting side.

In the U18 clash, the defining moment of the game came only five minutes after the opening kickoff when Rodriguez stole the ball from Alex Rowley.

“I just read him, I knew he was going to go back [with the pass],” said Rodriguez about the steal that led to the penalty kick. “I went for it.”

Rowley made an awkward challenge to win the ball back, but ended up fouling the Chivas USA attacking midfielder in the box and reduced his side to 10 men due to a red card for the denial of the goal scoring opportunity. 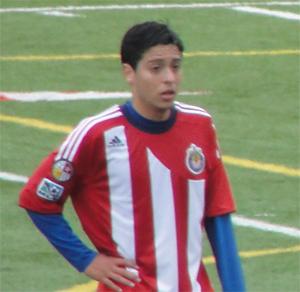 Chivas USA midfielder Stevie Rodriguez
Rodriguez stepped up and finished the penalty kick for the early opener, but that was only the start of a great first half for the U.S. residency product.

Five minutes later, Rodriguez punished the sluggish Whitecaps side with a jaw-dropping finish for his second goal of the game. Left back Eric Gonzalez started the movement with a pinpoint 30-yard pass to the chest of Rodriguez who had made a diagonal run through the defense.

“I was going to cross it actually, but I saw the goalie off the line,” said Rodriguez about his second goal. “So I just tried it.”

Rodriguez perfectly controlled the pass off his chest, and then hit a wicked 25-yard volley into the corner of the net to double the lead.

“We are young and the players did not have a lot of time to get a shape with ten players against 11,” said Whitecaps Academy Technical Director and U18 head coach Richard Grootscholten about the onslaught of goals in quick succession. “[Chivas USA] pressed high and played well.”

In the 16th minute, Spencer netted his first goal of the day to increase the Goats lead to three after he finished off a spill from the Whitecaps keeper.

“As a forward, you have to follow up shots especially on a rainy day,” said Spencer. “The keeper slipped, so it was an easy put-in.”

Seven minutes later, Spencer expertly finished off a cross from Marky Delgado for the final Chivas USA tally on the day.

“It was a good run by Marky [Delgado],” said Spencer. “He whipped in a good ball and I got on the end of it.”

With 12 minutes left in the half, Whitecaps closed the lead to 4-1 after the referee awarded Vancouver a penalty kick for a handball in the box. Caleb Clarke calmly slotted the spot kick home for his first of the day.

The Whitecaps forward added one more in the final eight minutes of the game on another penalty kick to bring his season tally to 14 goals in 12 games.

“I have to compliment my team though, it is not easy when you are 4-0 down,” said Grootscholten. “And I thought we had more chances at the end.”

Chivas USA improved to 7-3-1 on the season with the win, and Whitecaps dropped to 8-2-2. Both sides play on Sunday with the local side hosting CDA and the visitors heading across the town to square off against LA Galaxy.

In the later game, Huitema stole the show with a hat-trick performance. The striker netted the opener after seven minutes when the Whitecaps quickly sprang a counterattack following a free kick in the attacking third from the home team.

Speedy midfielder Sebastian Cabrera raced down the left side and neatly picked Huitema for a sliding finish. Cabrera facilitated the second goal, as well, when he stole the ball from a Chivas USA defender in the 18-yard box and picked out Huitema.

The tall striker hammered his shot into the goalie’s abdomen, which resulted in the young keeper fumbling the ball into his own net.

After half, Huitema completed his three-goal day with an unmarked header off a corner kick.

“[Huitema] is getting to understand the role a little bit,” said Grootscholten. “He can hold the ball and he can make the right runs. That is what I like about him, he can bring both attributes as a forward.”

Chivas USA briefly overcame its scoring woes with a penalty kick goal from Jeffrey “Q” Quezada. But the young Goats could not convert any other opportunities and were frustrated by the lack of consistency in front of the net.

“I thought in the first half, we created enough chances,” said Chivas USA U16 head coach Mike Munoz. “And if one goes in, it is a completely different game.”

“Vancouver was very organized and they have some good players,” added Munoz. “We gave up three chances and they took advantage of it.”