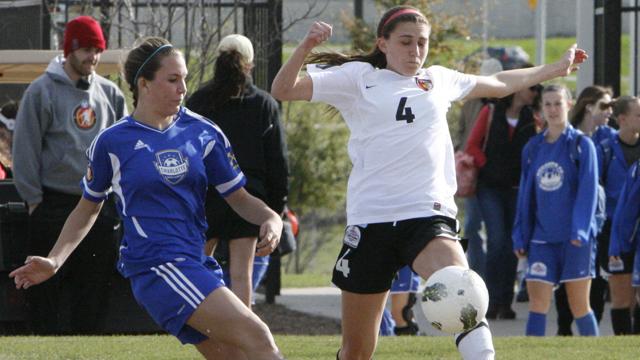 SAN ANTONIO, TEXAS – As Elite Clubs National League continues its first season where it has use Development Academy format to play stand-alone regional games along with the normal mass showcase gatherings, the showcases are still a big deal.

The fourth such gathering of the 2011-2012 season is in San Antonio This weekend, with teams beginning play Friday at the STAR Soccer Complex, under cold and windy conditions.

A total of 125 U-15 through U-18 girls teams – considered to be the best in the nation - will compete through Sunday, playing one match per day.

In the U16 division, Charlotte Soccer Academy battled the Kansas City Football Club Fury to a 0-0 draw. KCFC previously sported a perfect 17-0-0 record, and was a prolific team with 69 total goals. They were shut down by Charlotte, which improved to 4-9-5.

“We limited their play and took them in a little tighter at midfield,” said Charlotte coach Adam Denton. “When they get the ball wide, they are dangerous. When (goalkeeper) Sam (Steyl) was called upon, she did well, and had some saves from a distance.”

Steyl accounted for three saves in the defensive duel, including two key stops in the first half of play. 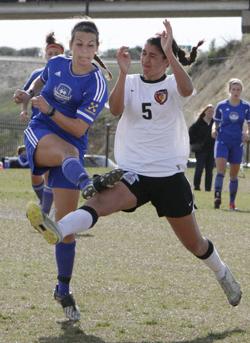 Dallas Texans' Sophie Groff
“I feel my defense did well,” said Steyl, an honor student at Ardrey Kell High School. “It was a very windy game, so we had a lot of clearing to do. Overall, I think we are not going to give up many goals, if we keep it up.”

Steyl especially credited two of her teammates for superb defensive play. Center back Lauren Nalevaiko was effective with headers, and Megan Gray did yeoman’s work covering the outside backs, according to Steyl’s analysis.

Twenty minutes into the opening half, Rush forward Aspen Robinson scored for the Littleton-based club, off her own corner kick.

“It curved right into the back post, and the wind helped me out,” Robinson said. “Our back play was really strong, and our forwards connected with the midfield. We played an overall good game.”

Goal No. 2 came in the second half from forward Jastin Redman, which proved to be the icing on the cake for the Rush.

Colorado coach Wes Hart was complimentary of the execution of his team, which has now scored 57 goals in 15 matches.

“It is a solid, hard-working group,” Hart said. “We did a good job settling the ball and making the other team chase, and we have special players who have the ability to break. It was difficult because of the weather and field conditions.  Considering the conditions, I was pleased with the soccer we played.”