And while the future can be somewhat murky for any women’s pro soccer league, there is another decent crop of junior talent looking to make a splash in the pro ranks next year.

Here are 15 potential players who will be high on the draft boards after the 2014 college season. 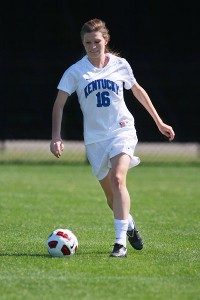 M Morgan Brian, Virginia: The reigning Hermann Trophy winner looks primed for stardom. The midfield marshal of UVA’s 2013 powerhouse, Brian’s pro outlook is certainly positive, even if she’s not the same athlete as Crystal Dunn. She’s got a great touch, soccer brain and can make any team better.

M Sarah Killion, UCLA: She may not pile up goals or assists, but Killion’s skills as a central midfielder are invaluable to the reigning national champs. She’s a player with USWNT potential who will look to cement her top 5 draft status with another quality campaign.

D/F Arin Gilliland, Kentucky: A versatile player who can slot in as a forward or center back, Gilliland gets one more crack at guiding Kentucky to another quality SEC campaign. She can score goals as well as set them up with her size and skill.

F Rachel Tejada, Illinois State: Looking for a mid-major talent to make an impact on the pro level? Tejada is probably the top candidate. She’s scored goals in bunches every year for the Redbirds and led her program to a first round win last fall.

F Chioma Ubogagu, Stanford: An athletic attacker with plenty of pace and the ability to get behind a team’s back line, injuries plagued Ubogagu for chunks of 2013. She’ll have another chance to showcase herself against premier talent for an opportunity to boost her draft stock.

M Sam Mewis, UCLA: Part of what is going to be a strong contingent of Bruins eyeing a pro soccer career, Mewis is a talented player who sometimes lacks consistency at the collegiate level. An attack-minded center midfielder who can unlock defenses and help control games with her passing ability, she’ll need to show well in the fall in order to climb into the first two rounds.

F Sofia Huerta, Santa Clara: The Mexican international might be in line for allocation from the federation if she continues to fit into the nation’s plans. Scores goals and adds to the attack from wide areas or up front, and she’ll need to be big for the Broncos in the fall.

M Dagny Brynjarsdottir, Florida State: A graceful attacking midfielder, Brynjarsdottir’s skills are easy to spot in the Seminoles’ possession-based offense. Her touch, vision and scoring ability set her apart – though like others on this list, her international status may throw her desire to go pro here or perhaps head back to Europe.

F Hannah Wilkinson, Tennessee: The Kiwi striker famously scored a goal for the New Zealand full national team, and she’s a force to be reckoned with at the college level. She’ll need a big 2014 campaign in order to prove she’s worth the international spot, though Wilkinson is more than capable of doing that.

D Abby Dahlkemper, UCLA: With Kassey Kallman’s graduation, the mantle of best center back in the country just might fall on Dahlkemper’s shoulders. The national champion and Hermann Trophy semifinalist seems like a surefire first round pick next year, and she’ll look to boost her stock and defend a title all at once.

M Daphne Corboz, Georgetown: Whatever Corboz lacks in athleticism, she makes up for in elegance on the ball, vision and creativity. Her French passport is certain to open up doors for her abroad if she doesn’t latch on with a pro team next season.

GK Katelyn Rowland, UCLA: Backstopped the U.S. U20 WNT team to its recent CONCACAF championship, and now Rowland takes firm aim on a World Cup and perhaps a pro career. Standing at 5-foot-11, she has a presence in goal that other women ‘keepers lack. And while she’s tall, she can make the low saves that prove challenging to others.

D Jaelene Hinkle, Texas Tech: The Colorado native is a tireless runner, an attacking outside back who can bomb forward to create and pin the opposition in their own half.

GK Sabrina D'Angelo, South Carolina: Dazzled in her junior year in goal for the Gamecocks and might end up on the Canadian allocation list if she can maintain that level in 2014. D’Angelo looks like a future No. 1 goalkeeper on the international level and will certainly be in demand on draft day should it come to that.

F Taylor Uhl, Stanford: Her transfer to Stanford had its ups and downs last fall, though Uhl is a cagey goal poacher who can turn just about any half chance into a tally. Working on her all around game is a key to her draft hopes, though she’s sure to end up getting a long look somewhere.