The American Athletic Conference is a creation of the tectonic shifts in conference realignment that have been so prevalent over the past few years. The AAC may be new in name, but it's essentially the Big East with a dramatically different face. While the "Catholic Seven" split off to form its own conference and took the naming rights to the Big East, the remaining schools kept the Big East's original charter and simply renamed their conference.

Cincinnati, Louisville, Rutgers, Connecticut and South Florida form the core of the old Big East, while the league poached Houston, Memphis and SMU from Conference USA and then Temple from the Atlantic 10. The result is that the conference has a tremendous amount of depth. Imports Memphis and UCF represent each of the last six C-USA tournament titles, and the holdover Big East squads each have designs on winning the league. There are tantalizing matchups up and down the league schedule, and the league title is up for grabs in the truest sense. 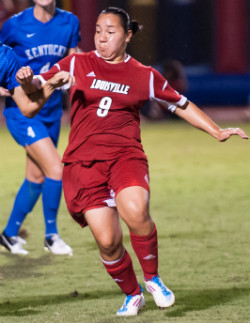 The Bearcats' 2012 season didn't start out like a slog, but it certainly ended that way. Cincinnati opened the season 3-0-1 before finishing 1-13-0 over its last 14 games. The season ended on an eight-game losing streak, and the program skidded into the offseason on the back of a crushing 2-1 double overtime loss to Louisville in the season finale.

The indignity was made worse when impact freshman Laura Rose suffered a leg injury on Sept. 23 and missed the rest of the season. Such was her impact that despite only playing 11 games, she still led the team with five goals at the end of the season. With Rose on the shelf, Cincinnati was outscored 21-3 the rest of the way and lost the rest of its games. Cincinnati will be ecstatic to get her back healthy for her sophomore season. The return of players like forward Mackenzie Grause, Callie Taylor and Katie Greer should give Cincinnati a more grown-up feel in 2013.

The Cougars made the postseason for the first time in two years last season, though it was a short-lived trip. They dropped out of the Conference USA tournament in the first round on a crushing goal against Colorado College with four seconds left in regulation. Houston coach Chris Pfau hopes the sting of that loss will carry its 21 letterwinners to bigger things in a bigger conference this season.

Senior goalkeeper Cami Koski is the team's most decorated returner coming off a season in which she was All-Conference USA Second Team. She had four shutouts in 2012, and her 15 career shutouts are already the most in program history. Midfielder Jasmine Martinez returns for her senior year after a solid 2012 in which she scored a team-leading eight goals. She also scored Houston's only postseason tally. A full 17 of Houston's 21 goals from 2012 returns. Unless the defense does more, the scoring load should increase in a tougher conference.

The Cardinals are a lock to be salty in 2013. Louisville won its first four games last season, though the team's 10-win season dead-ended in the first round of the Big East tournament. Now? Things are looking up. Louisville returns nine starters and 97 percent of its scoring, and it'll be tough for opponents to look past Charlyn Corral. She was named the Big East Midfielder of the Year last season after eight goals and seven assists. She spent the summer guiding Mexico to a silver medal in the World University Games with 10 goals in six games.

Conference realignment was particularly kind to the Cardinals. Of the five combined draws and losses in conference action Louisville sustained last year, four of those opponents are no longer conference foes. That includes Marquette - which is on the schedule but as a nonconference battle - and Georgetown, which should lighten the load on Louisville's push to join the men from last year as conference champions. They have as good a chance as anyone.

As far as Conference USA is concerned, Memphis accomplished just about everything it could. Over the last six seasons Memphis went 64-14-9 in C-USA and had a streak of five consecutive conference titles snapped just last season. New challenges in the AAC are as welcome in Memphis as they are anywhere.

The Tigers roll into their new conference digs with an arsenal. Forward Christabel Oduro won the C-USA Offensive Player of the Year plaudit two years running, and she's on the cusp of a handful of program records as her senior season approaches. She needs only 20 points to snap the program's all-time record. Memphis is well-rounded, too. In addition to Oduro, midfielder Kylie Davis and defender Diamond Simpson also made the conference's preseason first team. The Tigers may have a tougher time winning five straight in the AAC, but they'll assuredly be competitive out of the box.

The Scarlet Knights may not have been pleased that their season ended with a 6-1 loss to Virginia, but they could be plenty pleased that it came in the second round of the NCAA tournament. With this many impact players back from a fifth-place conference finish last year, that kind of seasoning should help Rutgers compete with the conference's big dogs. Or perhaps become one itself.

Canadian forward Jonelle Filigno tied the program record for goals in a season with 15 as a junior, putting her in company with USWNT star Carli Lloyd. As she enters her senior season, there are no more dangerous offensive threats in this conference than Filigno. PDA product Madison Tiernan was one of the most highly sought-after recruits in the northeast, and the four-star midfielder who chose Rutgers was named the conference's preseason freshman of the year. Her impact should be immediate.

Of all the conference newcomers, perhaps none have quite as much longterm expectation as SMU. The Mustangs were always a threat to win Conference USA, and life in a better conference only opens up more avenues for better recruits to flock to Dallas. SMU probed into the second round of the C-USA tourney last year, and upping the ante on competition will be a welcome thing here.

The trio of junior midfielder Rikki Clarke, junior forward Shelby Redman and senior defender Courtney Smith represent a capable spine that will guide SMU through a notably difficult schedule. Smith proved herself to be one of the most flexible defenders in the nation by providing 10 assists last year, good for 20th in the country. Redman, who had nine goals last year, will carry much of the scoring burden.

The extremely young Owls march into the 2013 season with a new conference and a head coach at the controls. In June, former assistant Seamus O'Connor slid in for Matt Gwilliam, who left to join the staff at Colorado College. O'Connor spent the last two years as an assistant on Gwilliam's staff, and he personally recruited most of the roster. The transition won't be seamless, but it won't be overly complicated, either.

Temple's strength last year was its defense, which put up seven shutouts last season and had the nation's eighth-best save percentage. O'Connor, though, will have to deal with a lot of inexperience. There are only four upperclassmen on the entire roster, and freshmen make up 37 percent of the team. That immediately puts the burden on sophomores like defender Erin Lafferty and keeper Shauni Karkhoff, both of whom were on the A-10 All-Rookie Team.

There was no stopping UCF in Conference USA last season. After snapping up the No. 3 seed in the conference tournament, the Knights rolled to three straight 2-0 shutouts to break Memphis' chain of dominance and win the event. After dropping Miami in a shootout in the opening round of the NCAA tournament, UCF lost a hard-fought 1-0 battle against Florida and finished the season in the top 20. They'll enter this season under the guise of Tiffany Roberts Sahaydak, who took over the head coach position this year from VCU.

At least on paper, UCF has a great chance to win the AAC title. The Knights have seven starters back, led by All-American Marissa Diggs, one of the best defenders in the country. Midfielder Madison Barney, defenders Carleigh Williams and Ashley Nicol and goalkeeper Lianne Maldonado are back from a unit that compiled a school-record 15 shutouts.

The Huskies have work to do in replacing productive forward Danielle Schulmann, who led the team in both goals (10) and assists (seven). The season dead-ended with a loss to Marquette, but the lightening of the conference load in the switch-over should help the Huskies' talented squad transition.

The good news is that UConn has plenty of goal scorers coming back. Andrea Plucenik broke out last year with five goals and five assists despite only starting nine games. Jennifer Skogerboe, Riley Houle, Samantha McGuire and Stephanie Ribeiro all scored at least three goals last season, and all four are back.

When the AAC was announced, few teams were as jazzed as USF. A lot of that has to do with UCF joining, creating an immediate in-state rivalry that should capture a few headlines. The Bulls had a solid year last year but it didn't go beyond the second round of the Big East tournament. They'll look to extend that to the NCAA tournament this year.

Sophomore Olivia Chance was a pleasant surprise last year, scoring four goals and two assists and earning a spot on the Big East All-Rookie Team. Ultimately, USF will go as far as Sharla Passariello takes them. The Wales native started all 19 games last season and led the team with eight goals. If USF is to continue its upward rise, Passariello will have to take center stage in her senior season.