While the departure of five teams from the Atlantic 10 has left things looking differently – including some of the better programs in Xavier, Charlotte and Temple – the stage is still set for what should be another exciting season. Preseason favorites Saint Louis will look to chase down another conference tournament championship.

It was a good season for Dayton in 2012, and with nine starters back from a year ago, there’s every chance that the they could end up pulling a surprise over favored VCU and Saint Louis. Led by seniors Abe Keller, Eddie Jones, John Howe and Jonathan Nelson there is plenty of talent. Adding depth are youngsters Chris Froschauer in goal, Maik Schoonderwoerd and incoming freshman James Haupt. 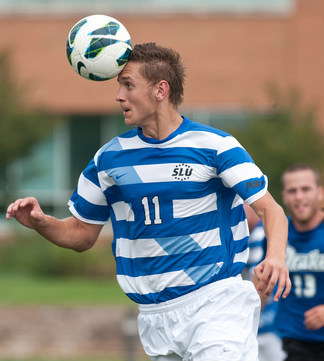 Chase Brooks has been brought in to take over Duquesne after two years at Niagara, where he posted a 22-6-9 record and guided the Purple Eagles to an NCAA Tournament berth. Brooks is no stranger to the conference, having served as the top assistant at Dayton for four seasons prior to taking over at Niagara. He’ll look to guide the program back into the A10 picture, no small feat as they haven’t hit double digit wins since 2006, the last time they eclipsed the .500 mark in the conference. The rebuild starts without last season’s leading scorer Joshua Patterson, who graduated, but it does include returners like Simon Gomez and Karter Sell along with transfer Arnaud Cesarini.

The lack of goal scoring led to Fordham’s flaws last season, and it’s one area that needs to improve if the program hopes to make it into the Atlantic 10 tournament. Senior Julian Nagel bagged three to lead the team in 2012, and he’ll look to pad those stats. Midfielder Nathaniel Bekoe has the talent and ability to drive the team from the midfield, something he’ll look to do more of in his senior season.

Making the move to the A10 from the CAA, the Patriots put together a solid campaign in 2012 and will look to build on that against new competition this season. They did lose Taylor Morgan’s 13 goals, but return midfield spark plug Timi Mulgrew, who scored eight goals and notched five assists. The versatile Hugh Roberts will provide leadership on the field, while incoming transfer Jannik Eckenrode should provide a boost to the back line.

Another squad that struggled to put the ball in the back of the net, the Colonials scored just 15 goals and conceded 39 in its first season under head coach Craig Jones. Finding a way to improve that without the 2012 leading scorer Seth Rudolph presents a steep challenge. Senior forward Ryler Ranalli finished at the second spot with three strikes and is a candidate to shoulder more of the offensive load, along with sophomore Jonny Forrest. The defense will be anchored by the experience Andri Alexandersson, while Akron transfer JP van der Merwe will look to win and keep a hold of the starting job in goal after splitting time with two other ‘keepers last season.

If there’s a program capable of hunting down the pair of VCU and Saint Louis, the Explorers have the makeup of a side eager to make another run towards a conference tournament, and perhaps contend for an NCAA tournament slot. Senior goalkeeper John McCarthy landed on the NSCAA Hermann Trophy watch list, and he backstops a good defense. Midfielder Jason Plumhoff, who was on the PDL Best XI this season with Reading United, will lead the attack along with Joe Farrell and Rob Friskey.

Junior forward Josh Schwartz is back after a five-goal, two-assist season and he’ll look to lead a Minuteman resurgence back to the Atlantic 10 tournament for the first time since 2008, which also happened to be the last time the team made it to the NCAAs. Defender Matt Keys played the most minutes last season amongst field players and will be key at the back.

Former Siena College head coach Gareth Elliott enters his first season at Rhode Island, another new coach looking to lead an improvement in the upcoming Atlantic 10 campaign. Junior midfielders Mike Casey and Matt Sykes are two of the returners liking to feature prominently once again after combining for nine goals and seven assists in 2012.

Picked in the preseason poll to finish second to last, the Bonnies conceded a whopping 46 goals last season, and will need drastic improvement in order to avoid the bottom. Forward Emmett O'Connor is a bright spot up front, though even if he scores goals in bunches, it won’t mean much if they can’t slow things down at the back.

It’s going to be an interesting season for the Hawks, who labored through last season with a very young roster. If some of the prominent returners – including midfielders Tim Lazorko, Pat McGlynn, Jake Nelson, forwards Emmanuel Temeh, Alex Critzos, defenders Collin Reilly and Jimmy Reilly – can move the program forward, it could turn into a much-improved season for Saint Joseph's.

The departure of the A10’s top programs like Charlotte and Xavier opens the door for a resurgent Billiken side that won the conference tournament last year. Entering this season as preseason favorites, the program has a spine strong enough to keep an eye on throughout the entire season.

Up front, Robbie Kristo is the spearhead of the offense, and he’s coming off a season where he bagged 11 goals and added five assists, while Adnan Gabeljic notched seven tallies of his own. In the midfield, David Graydon and Alex Sweetin are a formidable force, while Anthony Manning is one of the best center backs in the nation. Senior goalkeeper Nick Shackelford offers experience in a critical spot, giving Saint Louis all the ingredients for a big year, and a chance to jump back into the national spotlight.

Losing players early is a part of the game, and VCU striker Jason Johnson bolted for the pro ranks after a successful 2012 campaign in which he netted offensive player of the year honors. It leaves the Rams with the problem of replacing Johnson’s 13 goals, but Dave Giffard’s squad enters the upcoming season perhaps a bit deeper than before with a strong incoming class.

Holdovers from a year ago include forward Devon Fisher and midfielder Romena Bowie. That goes along with defenders Juan Monge Solano and Dennis Castillo, players who will certainly be out to prove they can get one-up Saint Louis. Midfielder Pablo Paz is a sophomore transfer from Costa Rica who could develop into a top talent this season. The Rams have lined up a very tough schedule that ensures they’ll be ready for the A10, with New Mexico, Maryland, Akron, Wake Forest, Virginia and Indiana all on the nonconference slate.