Our very own J.R. Eskilson sat down and spoke with Marquette head coach Louis Bennett. Check it out as the the two spoke about expectations for the upcoming season.
by Travis Clark

It’s going to be an interesting year for the new Big East, as the formation of a new conference has created a potential men’s soccer power. With prominent programs like Creighton and Xavier joining forces with Georgetown, St. John's and Marquette, the foundation for a quality league is in place.

Naturally, there are gaps to fill, and the loss of programs like Louisville, Notre Dame and Connecticut is a blow. But the aforementioned quintet is a strong one, and it’s likely that one of those four will end up as the conference champions this season. Could it possibly go one further and send a team to the College Cup?

After joining the new conference setup from the Atlantic 10, Butler has seen better days from a results perspective, but shouldn’t be counted out in 2013. There’s a strong core of returners that will look to buck the trend of recent struggles, including forward Jeff Adkins (last year’s leading scorer with five goals), senior defender Jordan Burt, senior forward Austin Oldham and junior midfielder Zach Steinberger. 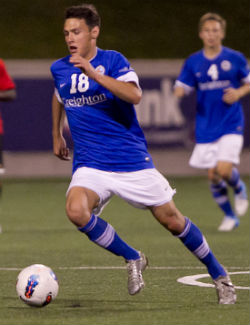 After making the College Cup in 2012, the Bluejays have gaps to fill, but are a storied program that has shown an ability to put together deep runs in the postseason. Their new home is sure to be a benefit to the program, and there is a solid collection of talent in Omaha ready for the step up in competition.

Key returners include U.S. U20 MNT representative Eric Miller, who can play as either a right back or in the midfield, German Timo Pitter, who enjoyed a breakout freshman season last year, along with forward Carlos McCrary, midfielders Zach Barnes and Bruno Castro. The team’s new No. 10, Colorado Rapids midfielder Ricardo Perez is an excellent player that has the potential to make a big impact as a freshman – and it will be needed for the Bluejays to have the chance to contend for conference or national honors.

With a pair of shutouts in preseason, is there a glimmer of hope for the Blue Demons this year? Picked to finish last in the preseason poll, that is sure to give the team a chip on its shoulder as the season progresses. To manage that, they’ll need to identify a replacement for Antonio Aguilar’s goals. Representing options up front are Thiago Ganancio and Jared Blincow, who finished last year with three and two goals respectively. As long as the team improves at the back, it could take a step forward and spring a surprise or two this season.

With leadership and quality, the Hoyas made program history with a run to the national championship game. What it does for an encore depends on the integration of a quality recruiting class, and the return of potent offensive duo Steve Neumann and Brandon Allen – the two accounted for 26 goals last season.

The loss of players like Ian Christianson, Tommy Muller and Jimmy Nealis likely means the Hoyas offensive will need to be all the more potent – though they do have goalkeeper Tomas Gomez back. The freshmen class has plenty of potential as well, as it includes Joshua Yaro, who has seen time as center back in exhibition games, and New York Red Bulls Academy product Alex Muyl. Whether the team can put together a repeat run of last season hinges on the freshman class, but it’s difficult to rule out a team led by Neumann and Allen.

If you’re looking for a program to make a splash on the national scene this season, look no further than the Golden Eagles, who carry a lot of similarities of their conference counterparts last season. They have the attacking talent and firepower to compete with anyone in midfielder Bryan Ciesiulka, a healthy C. Nortey, and a perfect complement to that pair in freshman striker Coco Navarro.

At the back, there is quality and experience. Massive center back Axel Sjoberg (who is listed at 6-foot-7) will line up next to senior Eric Pothast, and backstopped by goalkeeper Charlie Lyon, as reliable a netminder as they come. Perhaps the only question mark standing in their way is postseason experience and whether or not they can win the big, high-pressure knockout games in the tournament.

Last season was a difficult one for the Friars, and the transfer of Marcos Urgarte to Michigan is not going to provide any help. Wilder Arboleda, a redshirt senior, is the team’s key offensive focus after leading the squad with six tallies in 2012. He’ll need more help in the goal-scoring department, as the team only mustered 14 goals throughout last season.

Entering its second season under head coach Gerson Echeverry – who served as an assistant under coaching legend Manfred Schellscheidt – the aim now is for the Pirates to improve and near the heights of where is has been traditionally. Echeverry will have a lot of experience to call upon with a roster of 17 juniors and seniors combined, while also welcoming back the top two offensive producers from a year ago in forwards Max Garcia and George Velasquez. 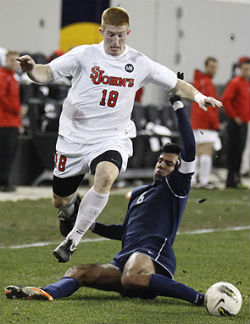 While the preseason focus may be more on Creighton, Georgetown or Marquette, overlook St. John's at your own risk. The Red Storm have a quality team from front to back, and while it may have been an exhibition game, handed preseason national title favorites Maryland a 2-0 loss last weekend in its final tune up. Seven starters are back on this year’s squad, including Preseason Big East Goalkeeper of the Year Rafael Diaz, arguably one of the conference’s best shotstoppers. Junior Tim Parker anchors the team’s back line, while the defense also welcomes incoming transfer Casey Osborne, the 2012 NSCAA Junior College Player of the Year.

Offensively, a healthy Adrian L'Esperance is set to help pull the strings in the attack alongside Danny Bedoya and freshman Miguel Alves, while perhaps the only question mark is up front and the lack of a reliable and consistency go-to scorer. If the Red Storm can muster up enough offense, it’s going to be a very dangerous team.

In 2012, the Wildcats equaled a program best with 12 overall victories on the season. The challenge now becomes both replicating that success and building off of it without eight seniors who graduated this past May.

In terms of the leadership element, that falls on returning seniors Dylan Renna and Daniel Gonzalez, the former a member of the Preseason All-Big East team, along with rising junior Oscar Umar. Defender Sean Sheridan, who was solid and steady his freshman year, is another returning contributor much is expected of. It’s going to take a lot to replicate last season, but that is surely something Villanova will set out to accomplish in 2013.

There’s a lot to like about this Xavier squad, a tough and determined outfit that is going to be tough to beat in its new conference. Defender Nick Hagglund is the team’s anchor at the back, while Matt Walker patrols the midfield and can create offense, as he hit double-digits last season in goals scored (11) and assists (10). While replacing Luke Spencer’s goals is a big priority to being a top half Big East team, this team is capable of it. Will Walker also provides depth alongside his brother Matt, while another senior Gino De Paoli can also provide the finishing touch in the final third. Also among the returners at the back is Garrett Halfhill, who can play both along the back and in the midfield. Even without Spencer’s goals, this is going to be a very good team once again.