It’s a rare sight in college sports these days to take a look at a conference that hasn’t been altered ahead of the 2013 campaign.

Technically, the Big Ten will see some change, just not until next summer when Maryland and Rutgers are added to the fold.

At least in women’s soccer, the preseason focus sits on a team coming off its best season in program history. Penn State made it all the way to the College Cup and national championship game, falling short against perennial power North Carolina.

The Nittany Lions have won 15 straight Big Ten regular season titles. But they are by no means a shoo-in for this year, as Michigan, Illinois and Ohio State are all programs that shouldn’t be overlooked. Whether or not any of those three – or any other team for that matter – can stop that streak remains to be seen. 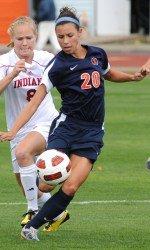 Midfielder and possible future U.S. Women’s National teamer Vanessa DiBernardo is the engine that helps make the Fighting Illini go, and a full season with her in the ranks adds a jolt to Illinois’ hopes and aspirations of challenging for the top spot in the Big Ten (DiBernaro missed time at last year’s U20 World Cup).

She’ll need help, however, for a team that conceded eight more goals than they scored in 2012. One of those players who can chip in in the final third is Nicole Breece. The sophomore from St. Louis scored four and added three assists last season, and will certainly aim to build on an impressive start to a college career. At the back, senior defender Kassidy Brown provides ample experience, and will be front and center as the team aims for defensive improvement.

There’s a new head coach for the Hoosiers, as six-year assistant/associate coach Amy Berbary stepped into the top spot after the retirement of former head coach Mick Lyon, who was in charge for 20 years.

Berbary will have some key returners back in the fold, including forward Rebecca Candler, who set a program record with 10 assists last season, along with midfielders Lisa Nouanesengsy, Abby Smith and goalkeeper Shannon Flower. One of the biggest challenges the Hoosiers face is finding enough offense in the wake of Orianica Velasquez’s graduation.

There’s a lot of offense returning to the Hawkeyes, as forward Cloe Lacasse and Ashley Catrell combined to score 20 goals and notch 11 assists in 2012. Their return is likely to help the squad cope with Dana Dalrymple’s graduation. Of course, if the team can rattle off nine straight non-conference wins like they did last year in 2013, they’ll have to cope better with the Big Ten conference slate, as Iowa went winless during seven of their last eight games after that sizzling start. Defender Melanie Pickert provides experience at the back and Alex Melin anchors the team in the middle of the park.

Former USWNT coach Greg Ryan continues to reshape and improve the Wolverines, and looks poised for another solid season. Leading the team’s fearsome attack is Canadian youth international Nkem Ezurike, a handful in front of goal who scored 15 tallies in 20 games. There’s plenty of other talent and experience on the roster as well.

Versatile defender Holly Hein can get the job done in different spots on the park, defender Shelina Zadorsky is another Canadian youth international and transfer Olivia Brannon could be a huge boost to the team’s back line, despite the graduation of quality goalkeeper Haley Kopmeyer. Also adding to the attack is Michigan native and two-time State Gatorade Player of the Year Madisson Lewis, who looks to make an impact during her freshman season.

The transfer of defender Annie Steinlage, an all Big Ten selection last year, was a big blow for the Spartans, along with the graduation of their most productive offensive player in Olivia Stander. But there is still experience to lean on, with defender Nicole Caruso, midfielder Megan Marsack and forward Paige Wester back in the fold, to go with Allyson Krause, who was named to the Big Ten All-Freshman Team.

The big news ahead of this season is how Minnesota copes with the transfer of goal scorer extraordinaire Taylor Uhl, who is now on the books with Stanford. The challenge of replacing almost half your offense (Uhl scored 21 of the team’s 44 goals in 2012) is never an easy one, but there are candidates on the Gopher roster they’ll likely turn to. That includes Katie Thyken, who scored seven goals and notched six assists from the midfield, and forward Haley Helverson, who logged over 1700 minutes her freshman season. Incoming freshman Simone Kolander, who can play up front or in the midfield, represents another option. The two-time Gatorade State Soccer Player of the Year finalist from Minnesota, finished with 66 goals in her high school career but will need to adjust quickly to the higher level.

Last year was a mixed bag for the Huskers, and they'll look to inch their way up the standings. Junior forward Mayme Conroy presents the most dangrous offensive threat after scoring 14 goals in 2012, helping the Nebraska native land a spot on the Big Ten Second Team. A pair of players also picked up international experience during the offseason as senior defender Ari Romero traveled to Portugal to compete in the Algarve Cup with the Mexican national team, and sophomore forward Katie Kraeutner traveled to Portland to train with the Canadian U20 national team.

Critical to improvement for the Huskers will be shaping up at the back, as they conceded 38 goals. They'll have experience back there, with the leadership of Romero, and the return of defenders like Jaylyn Odermann and senior goalkeeper Emma Stevens.

Ten starters from last year are back for the Wildcats, including senior forward Kate Allen (seven goals, three assists), junior defender Jackie Alyinovich, senior defender Nicole Jewell, sophomore midfielder Margo McGinty and midfielder Georgia Waddle. What will that mean for 2013? It’s going to take significant improvement to catch up with the top programs in the Big Ten, but the Wildcats should definitely take a step or two forward and improve in the conference win column if all goes well.

An otherwise successful 2012 came to a disappointing end for the Buckeyes, losing to Oakland in the first round of the NCAA tournament. That shouldn’t overshadow a Big Ten Tournament title, however, and a lot of the same pieces are left in place from a year ago.

Although midfielder Danica Wu returns, along with co-captain and center back Megan Fuller, the big question for the Buckeyes is up front, as leading scorer Tiffany Cameron graduated. Her departure, combined with Lauren Granberg and Aly Walker, means that 80 percent of the offense is gone from last year. Canadian youth internationals Nichelle Prince and Lindsey Agnew, both in the U20 pool, will get first crack at minutes up front for the squad. If they can supply enough goals, or someone else can, then replicating last season’s success might not be too far off.

It was a banner season for head coach Erica Walsh and the Nittany Lions program in 2012, making it all the way to the National title game, only to come up short against North Carolina in the College Cup. There’s plenty of reasons to think that Penn State can at least come close to duplicating last year’s run. While midfield dynamo Christine Nairn has graduated, Costa Rican Raquel Rodriguez Cedeno can fill in admirably. And while Erin McNulty leaves a gaping hole in net, defender Whitney Church provides grit and experience in defense.

Toss in the return of dynamic goal scorer and U.S. U20 World Cup winner Maya Hayes, along with a strong recruit class that includes U17 WNT defender Brittany Basinger, and while the experience level might not be quite the same, the talent is definitely still there in State College.

Another program that returns significant talent from 2012, leading offensive talent Jordan Pawlik and Alex Hairston will look to ratchet up their production and jumpstart the Boilermakers this season. Two-year starting goalkeeper Clara Kridler is expected to retain her job in net, while Jordan Frick, Mollie Kuramoto and Hadley Stuart provide the needed experience for this team to make something happen on the field.

With only two seniors, the Badgers enter this season with a young roster. But that doesn’t mean they lack talent or experience, as leading scorer Cara Walls enters her junior year on the heels of a ten-goal outburst in 2012. Kinley McNicoll is expected to feature prominently in the middle of the park, and the addition of the talented Rose Lavelle – a member of the U.S. U20 player pool – should also provide a significant boost. Head coach Paula Wilkins certainly has the experience to push the right buttons and make the Badgers a threat this season.