While college soccer may be all about parity, few conferences can match the Ivy League in terms of it being anybody’s game. And that appears to be the case once again this year, as all teams enter this year with new hope and optimism after Cornell put in one of its best seasons in recent memory.

After a very good season in 2012 where they advance to the second round of the NCAA tournament – managing to put a scare into Maryland before losing 2-1 in the game’s final five minutes – the Bears face the monumental task of replacing five seniors who earned All Ivy League honors in 2012. That includes defenders Dylan Remick and Eric Robertson to go with midfield maestro Thomas McNamara. Leading scorer Ben Maurey is among the returning players, despite the fact that he wasn’t a starter for the duration of the season. A suffocating defense was the key last season, conceding only 12 goals in 19 games, so replacing that spine is crucial in order to contend for an Ivy League title. Getting a contribution from some of the incoming freshman class of eight players is crucial if they hope to come close to last season’s performance. 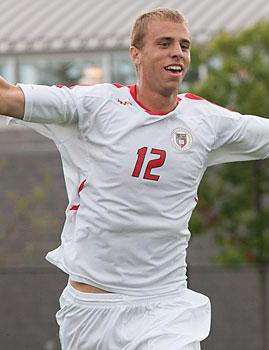 An inability to score goals doomed the Lions to a middle of the standings finish in the Ivy League, as they had the defensive fortitude to keep just about every game they were in close. All but one of their losses in 2012 was by a single goal, leaving the squad with a firm grasp of what to accomplish in the coming season. One possible candidate this fall is incoming freshman Nicholas Pappacena. The Weston FC forward was one of the top scorers in the 2012-13 Development Academy with 23 tallies, and if he can get service from the likes of midfielders David Najem, Antonio Matarazzo and forward Henning Sauerbier, it might be the combination Columbia needs to climb the standings in the Ivy League.

The Big Red’s 2012 campaign was a dream season. Behind a swashbuckling attack led by All American forward Daniel Haber, Cornell won an Ivy League crown for the first time in 1977 and appeared in the NCAA Tournament, losing in the first round against Syracuse. Only three seniors are gone, but all three were important, including starting goalkeeper Rick Pflasterer, midfielder Nico Nissl and forward Tyler Regan. High-scoring Haber elected to turn pro as well, signing with a pro club in Israel.

While head coach Jaro Zawislan is going to have to find a new way to replace the 22 goals and 13 assists of Haber and Regan, he will be able to rely on experience players like center back Patrick Slogic, the team’s minutes leader last season, senior midfielder Stephen Reisert and sophomore handyman Atticus DeProspo. Provided they can get the goals from somewhere, it could be another strong season in Ithaca.

As 2012 powers Brown and Cornell reload, it opens the door for the Big Green to pounce on the Ivy League summit. This despite a big loss of their own, as head coach Jeff Cook left to take a job coaching the Philadelphia Union. Assistant Chad Riley took over the top spot, and he inherits a team that finished only three points behind first place Cornell last season.

Riley has plenty of returning talent to call upon as well, including midfielder Kevin Dzierzawski, forward Alex Adelabu and midfielder Colin Heffron. Like every season, the Ivy League is wide open and the Big Green will look to take advantage.

It was a predominately young Harvard squad last season that struggled, laboring to a winless Ivy League campaign. Surely the Crimson will aim for a significant improvement, and they’ll hope that the first year players who gained valuable experience a year ago can raise their level and key a turnaround. That includes midfielder Oliver White, defender Mark Ashby, forward Jake Freeman, along with goalkeepers Evan Mendez and Joe Festa.

It wasn’t scoring goals that was the main problem for Penn last season, as they bagged 27 and only failed to score in two games all season. The other end of the field was there they struggled, conceding 37 overall, highest in the Ivy League. Provided that they can fix those issues at the back, scoring goals shouldn’t be too big of a challenge once again. Even thought they lost Travis Cantrell, contributors Stephen Baker, Markhus Lacroix and Alex Reddy return, and they’ll get a pair of talented freshmen to join them up front in Alec Neumann and Sam Heyward. Former U.S. youth national team player Travis Pillon is also joining the Quakers, and he’ll likely have an instant impact on the flank in either a defensive or midfield role.

Another side that has to like their chances heading into 2013, the Tigers lost only two big pieces from last year’s third-place finishers, as Mark Linnville and Matt Sanner both graduated. And while each was named First-Team All Ivy, Matt’s little brother Thomas Sanner is the heir apparent to the team in the final third, leading the Tigers in points in 2012 on his way to league Rookie of the Year honors. Other big contributors who return are Myles McGinley, Cameron Porter and Patrick O'Neil.

Goals were very hard to come by for Yale in 2012, tallying an Ivy League-worst nine in its 17 matches and getting shutout ten times. Finding a way to improve that total is critical if the Bulldogs hope to have any chance of jumping into the list of contenders. Returners like Jenner Fox, Peter Jacobson, Connor Lachenbruch, Max McKiernan and Philip Piper will surely aim to rectify those offensive doldrums.