With only two rounds now included in the MLS SuperDraft, there were plenty of interesting prospects available on Tuesday during the Supplemental Draft. The four-round circus saw the likes of Jose Gomez, Joe Franco, Will Bates, and many others have their rights claimed by MLS clubs.

The path to a roster spot is still a long journey though with only few spots available for these players, but the Supplemental Draft has churned out some diamonds in the past including 2012 MLS MVP Chris Wondolowski. 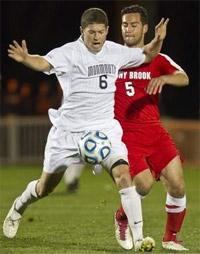 Will this year’s draft turn out the next Wondolowski? It is difficult to say, but there are some players who have the capability to reach that level from this pool.

Below is a highlight of just some of the picks from Tuesday. For a full rundown of all the picks, check here.

Outside midfielder/back Ryan Clark from Monmouth was the first off the board on the day to the New York Red Bulls. Clark started 80 games during his career with the New Jersey program. In his final season, he tallied three goals and six assists while anchoring an outside midfield role. The tireless worker may transition into a more defensive position at the next level though. New York also picked up Michael Bustamente (Boston University), Ben Fisk (Washington), Stephane Diop (Connecticut), Marc Cintron (Providence) and Andrew Ribeiro (Creighton).

Chivas USA kept its word with the ideology of only selecting Mexican-American players from California with its selection of Jose Diaz with the second overall pick of the Supplemental Draft. The UC Riverside center back is technically very adept and could be a nice addition to a squad that is looking to rebuild with a new identity. The Goats also added Paul Islas from Fresno Pacific, who has been heralded as one of the gems of this class from outside of Division I. The speedy, technical forward did not receive an invite to the combine, but he will have a fair shot to show his worth in preseason camp. Chivas USA also select Joe Franco (Cal State Northridge(m) in this draft. Franco, the Big West Defender of the Year, ended his collegiate career in November with a torn ACL against San Diego in the NCAA Tournament, and is still on the road to recovery. Watch our video profile of Joe Franco.

With the third overall pick of the Supplemental Draft, Portland reunited goalkeeper David Meves with his college coach Caleb Porter. Meves starred in the net for Akron for four seasons and now heads to the Northwest to join Porter in green. The Timbers selected Chris Hegngi, a D.C. United Academy product, with their second round pick. Hegngi is a physically imposing forward, which does not seem like the type to fit Porter’s style of play.

New England selected Jossimar Sanchez (Connecticut) and Seattle nabbed Will Bates (Virginia) to round out the top five from the first round. Both players head to their new destinations with injury concerns. Sanchez broke his leg during Big East play last fall against Marquette. Bates returned to action last fall after suffering an ACL tear the previous season. The injuries probably pushed the duo from SuperDraft picks into the latter stages of this draft.

In the more remarkable selections on the day, TopDrawerSoccer.com Player of the Year Jose Gomez slipped all the way to 38th pick where Toronto FC took the talented midfielder. Gomez will have his work cut out for him in terms of making it in the physical, rush ball soccer of MLS, but his technique could shine through with the right leadership at the helm of the Canadian franchise.

Check here for the full results from the Supplemental Draft.