While the conference is known most for its football, the programs in the Southeastern Conference are no slouch in the women’s game.

In recent times in particular, SEC programs have rapidly improved, bringing in top recruits from not just the United States, but the rest of the world as well. With the rising level of talent, it’s going to be an extremely close race in the upcoming 2013 season. 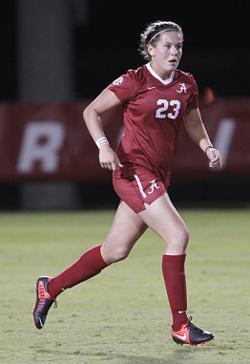 Last year’s Alabama squad was young, with only four seniors, and a pair of Dutch players are the key to making strides forward. Midfielder Merel van Dongen returns after spending this summer at the European Championships with the Netherlands, while Pia Rijsdik (7 goals, 6 assists) enters her junior year looking to be a part of a continually improving Crimson Tide side.

It’s not just the pair of Holland natives of course, as other returning contributors include Katie Bourgeois, Molly Atherton and Theresa Diederich, as Alabama looks to make a run at both a spot in the SEC and NCAA Tournaments.

Head coach Colby Hale enters his second season at the helm of the Razorbacks after guiding the team to six conference wins and a spot in the SEC Tournament a year ago.

Building on that solid start won’t be easy, though there’s a lot of experience returning. Hale will have his entire back five (defenders plus goalkeeper) at his disposal, along with forward Ashleigh Ellenwood, who was named to the SEC All-Freshman team after her strong debut season. It’s going to take a monumental effort to climb in the standings, but the Razorbacks are moving in the right direction.

After making the NCAA Tournament for the seventh straight season, the Tigers are looking to better that mark but will have to do it with a relatively young roster, with eight true freshmen currently in the ranks of the 23 players. And while some of the freshmen have already impressed – including attacker Samantha Solaru and twin sisters Brooke and Casie Ramsier – there are still some experienced bodies who will guide the group. That includes defenders Bianca Sierra and Kala Faulkner and forward Tori Ball, who will lead the line and be a crucial figure after the transfer of 2012 leading scorer Tatiana Coleman to UCF.

Seeing players graduate every year is part of college soccer, but for the Gators, the key losses of players like SEC Offensive Player of the Year Erika Tymrak, Jo Dragotta and Conference Defender of the Year Holly King represent significant blows. Head coach Becky Burleigh is no stranger to shuffling the deck of course, and does have returning goal scorers to count on, like junior midfielders Havana Solaun and Annie Speese. Freshman Savannah Jordan, who enrolled early in the spring, is one of many talented additions in the 2013 recruiting class.

Provided the squad can sort out the offense, the defense should be in good hands with the return of All-SEC defenders Taylor Travis and Christen Westphal. That will provide a solid foundation in front of goalkeeper Taylor Burke – though Burke will have to keep a hold of her starting job after the addition of Norwegian and freshman netminder Nora Neset Gjøen, who made Norway’s UEFA European Championship roster this summer. Despite the loss of those big pieces, the Gators should find themselves back near the top once again in 2013.

While six starters are back from last season’s down campaign, the Bulldogs enter this year retooling and rebuilding, with a total of 17 new faces on the roster, between transfers and new recruits.

How the season shapes out will be dictated by the ability of newcomers like Rachel Garcia and Marion Crowder to step in and make an impact while adjusting to a higher level. However, there are experienced players like defenders Torri Allen, Nikki Hill, midfielders Laura Eddy, Nicole Locandro and forward Madeline Barker.

It’s exciting times for the Wildcats women’s soccer program. After a very strong 2012, expectations are high, as UK was picked by the coaches to finish second in the SEC East Division behind Florida. The team also opens up the season on a newly renovated UK Soccer Complex, and will surely look to make their new home a difficult place to visit.

On the field, there are good reasons to hold the expectations high for the Wildcats. Versatile junior Arin Gilliland is the squad’s key player, as she can slot in as either a center back or forward. Her seven goals and seven assists were the best in both statistical categories last season. Forward Kelli Hubly was also immense in 2012, scoring six goals and notching three assists while starting all 22 games, and she’ll pair at times with senior Caitlin Landis. Midfielder Courtney Raetzman is also back to hold things down in the middle of the park.

The LSU Tigers are a squad of international intrigue, especially amongst their crop of newcomers. All eyes will be on new additions like Canadian youth internationals Summer Clarke, Emma Fletcher and Rebecca Pongetti, New Zealand standout left back Megan Lee and Mexican midfielder Natalia Gomez-Junco. She transferred from Memphis to LSU, but will have to redshirt for the upcoming season.

Gomez-Junco will unite with a fellow countrywoman, as the Tigers welcome sophomore Fernanda Pina back into the fold after a strong debut season in Louisiana, when she topped the team’s scoring charts with four goals and four assists. There’s also experience in goal with Megan Kinneman, and Alex Arlitt who anchors the midfield – but when surveying LSU’s chances, a lot of it will boil down to how the new recruits mesh and make an immediate impact.

There was no shortage of offensive firepower for Ole Miss last season, and with both SEC top scorers Mandy McCalla and Rafaelle Souza (13 goals, 7 assists each in 2012) back for this season, can the Rebels provide a better return in conference play? A year ago, the team began its season in dream fashion, opening up with eight straight wins, only to tail off and drop nine of the remaining 14 games.

Provided that the high-scoring duo of McCalla and Souza can replicate that kind of success in front of goal, the Rebels could make a run at a spot in the SEC Tournament and perhaps challenge for a spot in the NCAA Tournament. Goalkeeper Kelly McCormick provides an experienced presence at the back and will look to keep the defense organized throughout the looming season.

Another team that got the job done outside of SEC play – winners of seven straight to begin the 2012 slate, albeit against relatively weak opposition – Mississippi State folded once the conference schedule hit, managing just a pair of wins in its 13 SEC games. Former Texas Tech associate head coach Aaron Gordon is now the head coach of MSU, taking over from Neil Macdonald, whose contract wasn’t renewed after the team’s tame finish to the season.

Forward Elisabeth Sullivan (12 goals, 4 assists) is the centerpiece to the offense, and she’ll look to pile on and improve her goal tally this season. Also amongst the returners to Gordon’s squad are defenders Morganne Grimes and Shannen Jainudeen, as the team looks to improve on its SEC defensive record from a year ago, when it conceded 33 goals in league play.

One of two newcomers from a year ago, Missouri didn’t have much trouble making the adjustment to life in the SEC. A lot of the success came as a result of dynamic play from both Alyssa Diggs and Dominique Richardson, as the pair combined for 12 goals and 5 assists, on the way to both netting All-SEC postseason honors.

It was far from just a two-player show, of course. Defender Candace Johnson kept things tidy at the back in front of sure-handed goalkeeper McKenzie Sauerwein, who played every minute of last season. The Tigers can help their longtime head coach Bryan Blitz reach a milestone this year as well, as he sits just 12 victories shy of 200 wins with Missouri.

Goals were hard to come by for the Gamecocks in 2012, and as a result, the team failed to put together a run of victories at any point of the season. Forward Danielle Au is sure to hope change that after bagging a team-high four tallies last year, while South Carolina will have the services of Canadian youth international goalkeeper Sabrina D'Angelo in net for the duration of the season – she missed the start of last year while away at the U20 World Cup. In total, nine starters are back, along with most of their main goal scorers. They’ll need to find the back of the net at a much higher clip in order to improve in the win column, both in and out of conference.

Second year head coach Brian Pensky set the bar high for himself during his debut season in Knoxville, but there’s little question he has the talent and team to push the Volunteers into a nationally prominent place. New Zealand international Hannah Wilkinson leads the line, and is a handful for even the best center backs in the nation to cope with. Her eight goals in just 16 games (she played in the U20 World Cup as well) last season led the team.

And while scoring goals was little problem for Tennessee, bagging 37 in all, it was the defense that was truly their main strength, conceding 0.73 goals per game (16 in all) and 91 shots on goal in total in 2012. Replicating that success is the key element to making a run at an SEC title. Defenders Tori Bailey and Allie Sirna are both back to help, as is goalkeeper Julie Eckel, who started all but one game last season.

A rampant offense? Check. A stifling defense? Also check. The Aggies had it all last season, making the transition to the SEC with ease, and once again the side from Texas is favored to win the conference. Seven starters are back from last year’s team, and it should put opposing SEC teams and top squads around the country on notice.

There are few weaknesses in the team heading into the upcoming campaign – Jordan Day is one of the nation’s best goalkeepers and senior Rachel Lenz an absolute rock across the back line. Junior forward Annie Kunz bagged 13 goals, while Kelley Monogue added 10 in just over 1,000 minutes played as she recovered from an injury. Add Shea Groom into the mix, who tallied five goals and seven assists, and Meghan Streight bossing the midfield, it’s easy to see why the Aggies were tabbed preseason conference favorites heading into 2013. Forward Elizabeth Keester was a dominant goal scorer in the ECNL over the past couple of seasons, and only adds to what seems like overwhelming offense on paper.

It was a young team that navigated through last year’s schedule, giving plenty of reason for hope and optimism as the Commodores bring a whole lot of experience back into the fold in 2013. Central figures in hopes of a turnaround include forward Cheyna Williams, defender Erin Myers, midfielder Andie Lakin and goalkeeper Alexa Levick.

Improving in SEC play is particularly paramount, as the team was poised for a solid record until losing its final six games in conference play, getting outscored 17-1 during that stretch. While that experience was surely difficult to navigate through, it could leave Vanderbilt poised to surprise the SEC this season.