The 2012 college season may have been better for the Southern Conference on paper than it was on the field. Furman boasted one of the best MLS prospects in the country in defender Walker Zimmerman, who was signed to a Generation adidas deal shortly after the season. Elon had, statistically, one of the best strikers in the country in Chris Thomas, who averaged 2.32 points per game and 1.05 goals per game.

The star power did not translate to postseason success though, and Elon was bounced from the NCAA Tournament after one game.

This fall brings a renewed since of hope despite the absence of Zimmerman and Thomas from the rosters of Furman and Elon respectively. Furman and Elon both reloaded with strong incoming freshmen classes. The rest of the conference is not far off the pace either.

U.S. U18 Men’s National Team (and U20 MNT hopeful) defender Trevor Haberkorn is the jewel of the incoming class. The Solar Chelsea SC (Dallas, Texas) product is a better defender than his predcessor, but he does not offer the same weapon on set pieces that made Zimmerman so valuable. 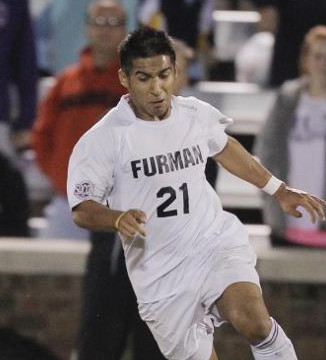 Scoring may be the issue for the Paladins with two of the top three scorers from last season gone, but senior midfielder Martin Ontiveros will still be pulling the strings and setting up chances for the new strike force to finish.

Games against Xavier and Akron to open the season should quickly reveal the quality of this squad for this fall. Realistic ambition of landing the SoCon title and an NCAA Tournament berth are the goals, but it will not be easy.

The Phoenix relied on Chris Thomas a lot in 2012, as the senior put the squad on his back at times and carried them through games. The roster, and distribution of duties, will be a bit more balanced this fall.

The preseason slate got off to a rough start with a 3-0 loss to North Carolina last week, but the score is misleading with all of the Tar Heels goals coming in the second half after both programs made numerous changes to the starting lineups.

Sophomore transfer Cauê Da Silva is an interesting new addition after tearing it up at Delta State last season. Can the Brazilian’s skill translate to the style of play at Elon?

Last fall did not go as well as Georgia Southern faithful were hoping with a disappointing 12 losses highlighting an otherwise unmemorable outing. This fall should be different though.

Kevin Kennedy and his staff have five seniors that should put the Eagles into contention for a top spot in conference play. The Eagles are also quickly speeding up the development of a strong sophomore class, which should be good for years to come.

German midfielder Hakan Ilhan is gone after an illustrious career with the Spartans, which means there is a big gap for the coaching staff to fill this fall. The Spartan roster still have an international feel to it with Rouven Wahlfeldt (Germany), Lukas Zarges (Germany), Oddur Gudmundsson (Iceland), Mahdi Ali (Finland), Quin Lema (Bermuda), and Hugo Coicaud (France) all expected to contribute this fall.

Matt Nelson enters his second full season in charge at Appalachian State. Last fall, the Mountaineers struggled to score with only 17 goals in 19 games. It will need to be better this fall if Appalachian State intends to challenge for the SoCon title.

Returning SoCon Freshman of the Year Nestor Jaramillo is the player to watch at Wofford. The Mexican-American is a skillful midfielder who could develop into the real prize of this conference moving forward. Junior Carlos Dominguez Gonzalez was named to the preseason All Conference team.

While Appalachian struggled with scoring, Davidson struggled mightily with defending. A leaky defense let in 36 goals in 2012, which is not nearly good enough for the competitive SoCon level of play. Another year of experience should help the squad right the wrongs of 2012 and put together a better effort in the defensive third this fall.