It was an extremely close race amongst the top four teams in the American East last fall, as UMBC completed a worst-to-first turnaround campaign, going from bottom side in the 2012 season, with one win that year, to a shared regular season championship and winning the conference tournament. 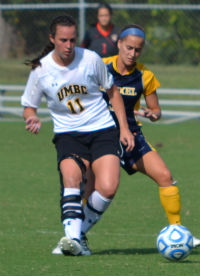 What UMBC can manage with the pressure of expectations will dictate their success in the upcoming campaign. Jessy Brown was in the thick of the team’s success a year ago, while Alexa Quaranta bagged a number of clutch, important goals, leading the team with eight on the season. There are talented young players from a year ago back in the fold, including midfielder Meg Kowalski and junior defender Amira Walcott, but they’ll have to identify a new starting goalkeeper after the graduation of Lauren Kadet.

Right up there with UMBC last season was Stony Brook, which will look to turn last year’s shared conference crown into an outright title this time around. Goalkeeper Ashley Castanio is a senior and will lead the team’s defensive group after picking up ‘Keeper of the Year honors a year ago. The loss of Stella Norman – who transferred closer to home to Denver – is a blow, along with the graduation of 2013’s leading scorer Larissa Nysch. Midfielder Tessa Devereaux is certain to play an even bigger role, while Leah Yurko can build on a promising freshman campaign.

A mixture of experience and young talent boosted Maine to a third place finish a year ago, and if the key departures are adequately addressed, they should be right in the thick of things once again. Scoring more goals is going to be at the crux of the issue, as the team managed just 22 in 19 games, led by Eve L’Abbe’s five. More goals, more wins, it could be as simple as that.

Right up there in contention for regular season conference honors was Hartford, finishing three points behind UMBC and Stony Brook. Senior duo Chanel Johnson and Stephanie Santos are the key players here, as Johnson’s nine goals led the team, while Santos provided eight assists on the year. They’ll look to match and exceed those totals this season, which would inject a huge boost for the 2014 campaign.

Head coach Kristi Lefebvre has hit the recruiting trail big time before this season, as 11 freshmen join the team this season, including Match Fit Academy center back Annie Monaghan, FC Boulder midfielder Keile Kropf and Brooke Jenkins from FC Stars of Massachusetts. The team already boasts last year’s conference rookie of the year, as midfielder Nikki McFarland collected those honors. On a team with just six upperclassmen listed on the roster, the youth movement will have to pay off in order for the team to contend.

Junior midfielder Rebecca Raber will be a key figure as Binghamton hopes for a resurgent season, while New Hampshire is aiming to improve on an offense that scored just 12 goals last season. Albany endured adjusting to losing its head coach ahead of last season, while Massachusetts-Lowell is persevering through the jump from Division II to Division I.

Over the past three seasons, it’s been a similar refrain for Navy. Post a double-digit win total, reach the final of the Patriot League conference 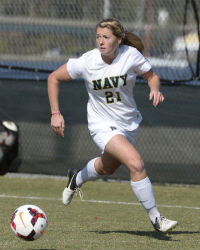 tournament final, and then lose, missing out on the NCAA tournament. Crossing that final has to be one of the biggest goals for the upcoming campaign, and they’ll be experienced and dangerous once again. All American defender Jade Seabrook anchors a defense that conceded only 12 goals last season, while Morgan Dankanich fires the attack, topping the team’s scoring charts with 14 tallies a year ago. Provided an adequate replacement for graduated goalkeeper Elizabeth Hoerner steps into the void, Navy should be there or thereabouts once again.

Thwarting Navy in last season’s conference tournament title match was Boston University, and the Terriers will be on the hunt again to advance to another NCAA tournament berth. They’ll have to do so with a number of new faces, as they lost six major contributors to graduation, including Emma Clark and Madison Clemens. Defenders McKenzie Hollenbauch and Kai Miller return to provide the team a platform to build on from the back, while sophomore forward Erica Kosienski will look to transform herself from substitute spark to consistent contributor. Head coach Nancy Feldman has shown the ability to succeed on a yearly basis, and this fall will provide to be a stiff challenge to keep the Terriers at the top.

A staunch defense and timely goal scoring helped Colgate into third place last season, and their two top scorers, Caroline Brawner and Emily Manoogian are both slated to return this fall. The team is moving to a new field as they begin the chase for the program’s 13th Patriot League title, and they’ll face significant non-conference tests against Boston College, Syracuse and Harvard. With 23 rostered players back, overtaking Navy or Boston University is not out of the question.

There’s some significant talent for Army to replace from last fall, including forward Kim An and defender Molly McGuigan, who were both named First Team Patriot League last year. Second-year head coach Marcia McDermott has tabbed an incoming class of ten players including high school All-American Clare Shea, a group that must step up in order to help the Knights maintain top six status and a spot in the conference tournament.

Looking to further boost its standing in the conference, American(w) is an intriguing case. After struggling outside of the Patriot League, went on a tournament run to the semifinals. Offensive improvement is paramount to any hopes of success in the upcoming season after scoring just 13 goals in 20 games, with just seven players scoring at least one goal. Senior forward Lindsay Muri is back after leading the team with six goals, and the rest of the team will look to follow suit under second year had coach Anabel Hering.

The rest of the teams in the conference – Bucknell, Lehigh, Holy Cross, Loyola (MD) and Lafayette – the realistic goal of a top-six finish is the starting point, as once teams qualify for the conference tournament, just about anything can happen. Former Georgetown assistant Naomi Meiburger was named the head coach of Loyola (MD) earlier this year and will look to make a first-year impact at the program.