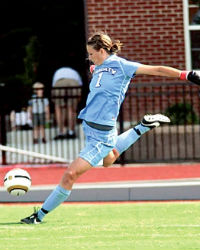 Last year’s regular season champs Radford graduated nine seniors, including conference Defensive Player of the Year Che’ Brown, one of the program’s all-time goalkeeping greats. Head coach Ben Sohrabi has put in the recruiting work in anticipation of this group’s graduation with the addition of ten recruits, and he’ll need a lift from them in order to finish near top once again. The good news is that Britney Kendall returns, one of the team’s top scorers who featured primarily in a substitute’s role. There are plenty of questions to be answered, but Sohrabi has shown the ability in the past to keep things clicking at a high rate.

Can Liberty pull off a repeat performance of last season? There are a lot of pieces back who were integral to the successful 2013 campaign. Goalkeeper Holly van Noord spearheads that group, fresh off a 14 shutout and 96 save season. Top scorers Crystal Elmers and Brittany Aanderund fuel the offense, while Maddie Boone is a senior and will lead the group at the back. On paper, it might be fair to tab the Flames as favorites in the conference.

That of course, would be premature, according to some of the remaining squads. Longwood, for example, struggled prior to the conference portion of its schedule, picking up just one win outside Big South play. But eight wins in the conference showed the team peaked at the right time of the season, something that the team will look to improve on in 2014. Kelsey Pardue is gone, but there is plenty of young talent back in the fold, including Gina D’Orazio and Amanda Spencer, both second team all conference honorees. Limiting second half goals seems like a big key for the Lancers this coming season, as they conceded 22 of their 27 tallies after the break last season.

In each of her three previous season, Krystyna Freda has hit for double-digit goal totals, with 16, 14 and 17 last year, which helped the Winthrop standout earn Attacking Player of the Year honors in the Big South. While it’s not necessarily a one-woman offensive effort, it’s pretty close. Only two other players on the team reached five goals in 2013, and Freda’s 106 shots attempted dwarf the next closest teammate, who fired off just 28. So it’s safe to say that Freda is going to have a target on her back and the offense will run through her as the Eagles eye an improved finish to the upcoming season.

Speaking of improvement, 2013 was a roller coaster of inconsistency for Coastal Carolina. Winning streaks of three games each sandwiched a four-game losing streak as the season ebbed and flowed. Brianna Panico is back after leading the team in scoring with six tallies, while replacing the quality of Swedish youth international Fia Jonsson is a big ask. Kacey Kelley enjoyed a strong start to the campaign a year ago and will look to help fire the offense after a five goal, five assist season. Kelley, along with senior defender Rylie Johnson, will provide a significant portion of the team’s leadership heading into the year.

Who might the best of the rest be? High Point will have to undergo some rebuilding after losing three seniors who were earned All-Conference honors, the same conundrum facing Presbyterian and Charleston Southern as the pack is reshuffled and teams gear up for what should be another strenuous campaign. 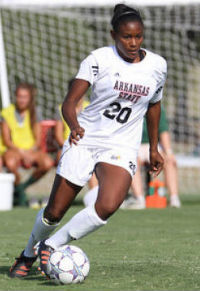 Few conferences in collegiate sports have seen the same shift that the Sun Belt Conference is going through ahead of the 2014 campaign, with three new teams joining and one out the door – including the second place finishers from a year ago, Western Kentucky.

South Alabama, which enjoyed a breakthrough campaign last fall behind the scoring exploits of Lauren Allison (16 goals, 11 assists), securing the conference tournament title in 2013. However, Allison isn’t returning for the upcoming campaign after signing with a second division club in her native England. She’ll be missed along with five other starters, including defenders Shelby Owen and Jess Owen, and goalkeeper Melissa Drish. That leaves a large void to be filled, and head coach Graham Winkworth has tabbed a recruiting class of 13 players, including two from Estonia and one from the UK, that will need to step in quickly in order to help the team remain near the top. Jordan Duncan is one of those, as her five goals and four assists last fall were third most on the team.

Should South Alabama fail to reach the same heights of a year ago, it should be a wide-open race. Arkansas State boasts First Team All Conference returnees Loren Mitchell and Lindsay Johansen to lead the charge, while Troy University will be working things out under new head coach Jason Hamilton.

It’s difficult to know what exactly to expect from the newcomers as well. Appalachian State punched above .500 last year, while Georgia Southern won just five games overall. It’s safe to say that this upcoming season could be anyone’s game when it comes to a regular season title as well as a spot in the NCAA tournament.