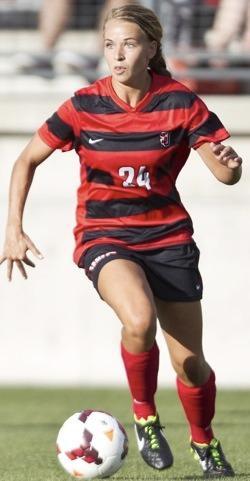 Cal Poly forward Elise Krieghoff took a sledgehammer to the school record books last season with a 21-goal performance that raised eyebrows across the land. The problematic striker is on a very short list of best players to pass through the Big West Conference in recent years. The Mustangs coaching staff used that golden goose to fly the squad to a conference championship. This season is shaping up to slightly more difficult to duplicate the effort. All-Big West contributors Haley Walker, Cristina Farrington, Jordyn Zander, and Kacey Held have moved on. Results from the spring schedule were not entirely encouraging with a 2-2-2 record. The Mustangs are hoping the nine-player all-California recruiting class will be ready to step in and help immediately.

Chasing down the defending champions is last year’s tournament champion Cal State Fullerton, which lifted the trophy after back-to-back victories in penalty kicks. The Titans are going through a minor rebuild as well. Associate head coach Diego Bocanegra packed up his ski jacket and joined the Notre Dame(w) coaching staff. Along with him, Fullerton needs to replace Big West Goalkeeper of the Year Lindsey Maricic and Big West Midfielder of the Year Erica Mazeau. The Titans do return star defender Morgan Barcheller who is looking to build off an all-conference first team performance in 2013.

UC Irvine is also looking to stake its dominance in the conference this season. After finishing only one game back of Cal Poly in 2013, the Anteaters are prime to take control this fall. The early schedule is not kind to Irvine though with games against Santa Clara and UCLA(w) to start the season. However, Irvine does not leave home in September, which could help rest the squad prior to the start of conference play. Big West First Team forward Laura McGrail is back for her senior campaign, but she is a little lonely with the graduation of fellow all conference contributors Natalia Ledezma, Zoya Farzaneh, Mady Solow, and Jordan Bruce.

Despite a seventh-place finish last season, Long Beach State earns distiction as a team to watch thanks to being the only Big West program to return more than player from the all conference first team. The Beach will rely on Big West Freshman of the Year Mimi Rangel and First Team defender Taylor Nelson.

There is Seattle and then the chase pack. The Redhawks crushed the competition in 2013 and not much has changed since then. Seattle returns the Offensive Player of the Year in Stephanie Verdoia, who had 15 goals and 12 assists as a junior. Natasha Howe, Jacqui Wallis, Kelly Beck, and Brianna Smallidge make up the rest of the five-player Seattle contingent on the Preseason All-WAC Team. Games against Washington and Portland dot an otherwise very manageable schedule for the WAC favorites.

The rest of the conference is hoping for a slip up from the perennial favorite.

"Seattle U is the clear cut favorite,” Utah Valley head coach Brent Anderson said in a press release. “They are an excellent team and well coached and it will be a challenge for the rest of the league to match their success."

Anderson’s group was selected second in the preseason coaches’ poll. Senior defender Lexi Robison was recognized as the preseason WAC Defensive Player of the Year.

UMKC snaked Utah Valley for the second place spot in the conference last season. The plucky bunch from Missouri tried to keep it close last year and returns Alyssa Elver and Sarah Todd, both made the Preseason All-WAC Team. The Roos will need quite a few things to break their way for the conference title dream to become reality. A strong showing from the incoming freshman class is at the top of that list.

Another story for the 2014 season in the WAC is the introduction of two programs in Chicago State and Texas-Pan American. Both programs are going to take their lumps early though, especially from the conference favorite.