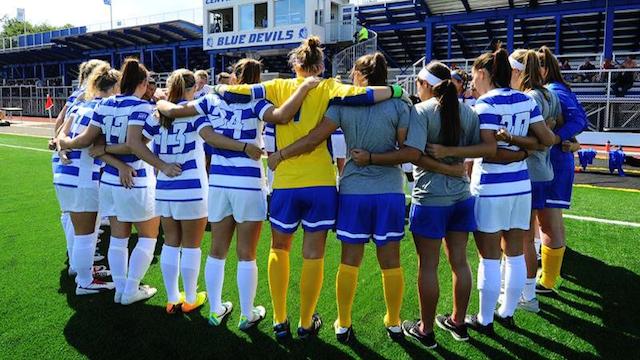 Monmouth nearly swept the conference’s individual awards at the end of the 2013 season for good reason. The Hawks took both the regular season and conference crowns to win their first league title since joining the MAAC, which earned them an NCAA tourney loss to Penn State. Incredibly enough, Monmouth snapped up eight of the league’s first-place votes in the preseason poll despite losing 2013 OPOY Dana Costello and top keeper Ashley Lewis, which speaks to the depth on offer here. Talent like Alexis McTamney, Brianne Boyle and Monique Goncalves make Monmouth the easy pick to win the league for a second straight year.

Fairfield is the nearest challenger, and Preseason Player of the Year Ashley Small anchors the attack after scoring seven game-winning goals in 2013. Defending DPOY Emma Pichl also returns, which should be a boost for the team with the most opportunity to bump off Monmouth and end the conference’s longest unbeaten streak. A pair of 2-0 losses last year, including one in the tourney title game, should be ample motivation in 2014.

Iona and Quinnipiac represented both of Fairfield’s draws in league play last year, and both have enough talent back to finish in the top half of the league. Iona defender Sali Ayinde made the Preseason All-MAAC Team, which personifies the Gaels’ iron back. In 2013, they gave up the second fewest goals in a single season in the last 15 years. Quinnipiac is also defined by its solid defense, which starts with standout keeper Natalia Grodzki.

Siena and Marist also look poised to do some damage in 2014. Siena was picked to finish third in the league in the preseason poll, and the return of defender and lead returning scorer Tara Sobierajski will hopefully help offset the graduation of leading overall scorer and assist-getter Brittany Pfaff, who had nine more tallies than anyone on the roster last season. Marist will again lean on captain Marissa Mertens, who helped the Red Foxes to seven shutouts last year. Amanda Epstein, who had three goals and eight assists last year, will also be key.

Over the last four years, the names Saint Francis (PA) and Tesa McKibben have been virtually inseparable. McKibben won her unprecedented fourth conference player of the year trophy after last season’s 20-goal, 14-assist performance led the Red Flash to 13 wins and back to the NCAA tournament. By the time McKibben graduated, she’d been the NCAA active points leader for nearly two years.

Needless to say, replacing McKibben’s 70 career goals will be one of the toughest asks in all of college soccer in 2014, and how well the Red Flash do it will determine their season. Saint Francis graduated all three of its first-team all-conference players, squaring the load on returners like Siobhan Bross and MacKenzie Walter. Of course, that cracks open the door for the field, which was led last season by a young Fairleigh Dickinson side that returns four second-team all-conference players.

The future looks bright for LIU Brooklyn, which thrust three freshmen into prominent roles last year and managed to get within a game of the NCAA tournament. The rapid maturation of all-rookie team selections Asha Mohiddin, Madison Gomez and conference rookie of the year Jennifer Peters should hearten a squad with title aspirations this season. Central Connecticut is in similar straits. It was the only conference team to nick a game off Saint Francis last year, and returning first-team midfielder Tori Sousa brings her experience back for one more go.

Wagner also operated with a young core last year and managed a league-high four players on the all-rookie team, including three midfielders in Gabrielle Davis, Megan Fritz and Sydney McNutt. After winning four conference games in 2013 as the final team in the standings to have a winning record, hopes are high to bump up that total this season. With improved cores, Mount St. Mary’s, Sacred Heart, Robert Morris and Bryant are all chasing .500 this season.