Twins and Alaska natives Ariela and Aaliyah Lewis took the SWAC by storm a year ago, firing Alabama State to an unbeaten conference mark, earning postseason awards along the way. However, ASU fell short of an NCAA tournament spot with a loss to Jackson State (MS)(w) in the conference tournament championship, something that the program will look to rectify this year. Along with the Lewis twins, Iita Pienimaki, Alexandria Cannon and goalkeeper Kylee Hathaway are key figures for Alabama State this season. 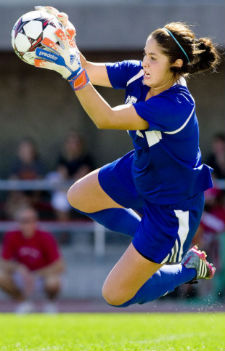 Preseason coaches polling tipped Alabama State as the favorites, with Jackson State, Prairie View A&M and Southern following, Mississippi Valley State and Howard rounding out the top six in the preseason. Rayana Speight and Jalana Ellis look poised for big seasons for Jackson, while Debbie Arguelles from Prairie View was selected as the preseason Defender of the Year.

The rest of the conference is about finding ways to improve, with programs like Alabama A&M, Alcorn State, Arkansas Pine Bluff and Grambling State struggling for long stretches of the 2013 campaign.

Newcomers Howard should prove to be an interesting addition. The Bison posted a decent record a year ago in terms of goals scored (21) versus allowed (17) and now have the chance to possibly grab an NCAA bid now that they are now longer an Independent program. Zion Clarke and Carmen Suarez are two key returnees who will only be sophomores this fall.

Fresh off a season of dominance in the Summit League, Denver is the obvious favorites ahead of the upcoming campaign. However, the team lost a number of standouts from last season’s squad, including Nicholette DiGiacomo and Kristen Hamilton, two All-American performers. The pair accounted for 27 of the team’s 54 goals last season, so replacing their goal-scoring contributions is a huge factor. Francesca Garzelloni, who will be a redshirt sophomore, is one of the faces who could prove capable of scoring after nabbing seven a year ago. Cassidy Rey enjoyed a tremendous season in goal as well, conceded just nine goals in 19 games, and she’ll look to build on that her sophomore year.

The Jackrabbits of South Dakota State finished just one game off the top in league play last season, and will look to keep the pressure on Denver this year. A strong defense played a big factor in that success, limiting opponents to just 14 goals in 18 games on the year. Junior defender Dani Patterson returns after earning a First Team All Conference nod, and she’ll anchor a defense that also brings back goalkeeper Nicoel Inskeep, who was named to the All Conference Second Team.

Sophomore forward Lauren Miller is amongst the important returners for North Dakota State, which checked in at third place in 2013. Miller notched 10 goals and seven assists on the way to a Conference Freshman of the Year award, and will once again be joined in the attack by Anisha Kinnarath, who scored nine goals. Defensive improvement will dictate this season’s success, as the team conceded 35 goals a year ago.

Coming off a record-setting season, Oral Roberts switched over to the Summit League and could potentially be in the mix for the top of the standings. While a couple of influential players, Jordan Parsons and Jennifer Abernathy, aren’t back, there still is plenty of offense to count on in the form of Kayla Keller and Megan Giles, both who enjoyed strong 2013 seasons. Goalkeeper Maddie Rhodes is back after helping contribute to a defense that conceded just 17 goals all year.

The rest of the conference is a collection of teams looking to make strides forward after sub-.500 seasons a year ago. IPFW(w) named Jason Burr as new coach to its program in May. He’ll look to rework an offense that scored just 12 goals all season.

One team that could look completely different this season is Western Illinois, with 19 freshmen rostered for 2014. And while there is going to be a lot of youth with the potential to step up, experienced players like Sarah Hall remain. The trio of IUPUI, South Dakota and Nebraska-Omaha all look to improve on one-win conference records from last fall.