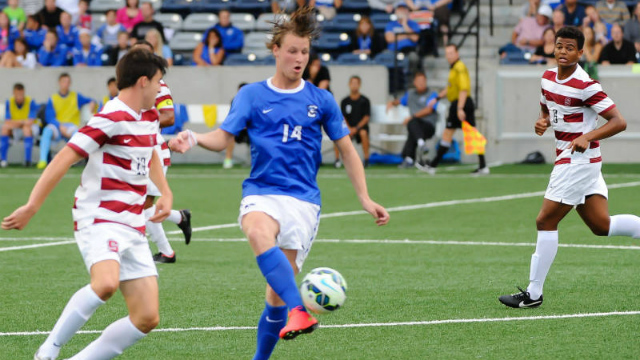 The Omaha power is primed and loaded to be just as impressive this coming campaign. Head coach Elmar Bolowich boasts his usual blend of outstanding German talent (Vincent Keller, Fabian Herbers, Timo Pitter) and domestic support (Lucas Stauffer, Eric DeJulio, Connor Sparrow). The ace in the hole this season is the return of Ricky Lopez-Espin. The towering No. 9 enjoyed a great start to his freshman season last year before going down with an ACL tear, and could be enough to push the Bluejays into the conversation for a national title.

After a brilliant season in 2014, the Musketeers must reload in a number of different spots on the field. Fortunately, returning talent includes Kiwi stalwart Cory Brown and Matt Vasquenza, who finished tied for first in goals scored last year as a freshman with seven tallies. Head coach Andy Fleming brought in a big class of 11 freshmen players, some of who can fill in the gaps as well.

With the return of its entire starting back line, the Hoyas enter 2015 as one of the national title favorites one year after finishing a few minutes from a College Cup appearance. Joshua Yaro anchors the defense next to Cole Seiler, while one of the questions that the team must answer is a new starting goalkeeper. Brandon Allen is a senior and will fire the offense, supported by fellow Red Bull Academy talent Alex Muyl and Arun Basuljevic.

What do the Friars have in store for an encore after a College Cup appearance? Expectations are high both in the conference and for the NCAA tournament even with a couple of departures. Forward Mac Steeves is sure to be a handful for opposing defenses, while midfielder Julian Gressel provides both calm and steel in the center of the park.

Finding a new source of offense is one of the big keys for the Wildcats ahead of the new season, as its two top scorers are gone from last year. There are quality pieces returning, however, as goalkeeper Will Steiner provides experience in net and midfielder Sean Sheridan has shown the ability to compete against some of the best teams in the conference.

A return to the NCAA Tournament is an obvious target for the Golden Eagles after missing out in 2014. Louis Bennett II and C. Nortey bring punch back into the attack, although Marquette must find replacements in defense for Axel Sjoberg and goalkeeper Charlie Lyon, who are both on MLS rosters now.

Ten new faces join the Pirates ahead of the new season, which will be one of the youngest teams in the conference – a total of 20 of the 28 players are either freshmen or sophomores. German goalkeeper Julian Spindler is one of the junior returners, along with fellow countryman Samuel Geiler in the midfield.

Englishman David Goldsmith’s goal production dropped to just six tallies last year as the Bulldogs scored just 18 goals overall. That’s a big point of improvement to target, along with a better record away from home after posting a 0-5-4 mark on the road in 2014.

The Blue Demons men’s soccer program hasn’t had a winning overall record since posting a 9-7-4 mark back in 2008. It could be another tough season, as DePaul has a young roster of 16 freshmen and sophomore. There is talent, including midfielder Simon Megally who will look to be a big part of the program’s push to improve this year.

Similar to a couple of other programs, the Red Storm is a roster that trends on the younger side with 19 freshmen or sophomores. Experience in goal is provided by redshirt senior Jordan Stagmiller, while senior defender Gabriel Camara is another key piece at the back.