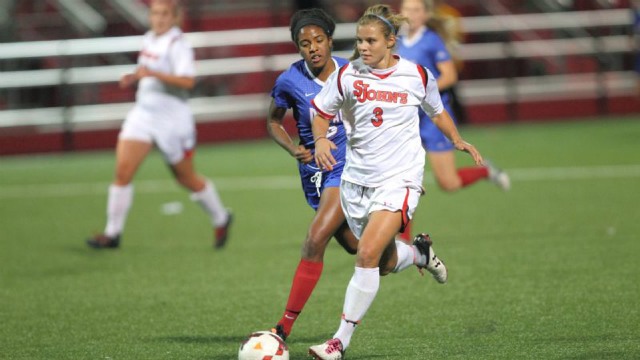 It was a sensational 2014 campaign for the Blue Demons, which swept their way to a regular season and conference tournament double. They lost just one game, a cruel first round matchup in the NCAA tournament against Wisconsin, which was seemingly fashioned because of the programs’ proximity to one another. A dynamic attack returns three of the team’s top four scorers from last season, as Elise Wyatt, Alexa Ben and Abby Reed combined for 32 of the team’s 44 goals. Defense should be a strong suit too, with goalkeeper Alejandria Godinez and defensive leader Sarah Gorden providing plenty of experience at the back.

While the Hoyas lost Daphne Corboz to graduation (who’s now playing over in England for Manchester City Ladies), head coach Dave Nolan has a ready-made replacement for the No. 10 role: Daphne’s younger sister Rachel. The sophomore has similar potential and talent, earning All-Big East Second Team Honors last fall in her first season. Goalkeeper Emma Newins returns as a graduate student, a boost to a usually stout Hoya back line, while Marina Paul is an important piece in the midfield to compliment Corboz.

There’s a good reason the Red Storm were voted as preseason co-favorites for the upcoming season, as goalkeeper Diana Poulin and defender Georgia Kearney-Perry give the New York school one of the league’s best defenses off the bat. With English forward Rachel Daly leading the line and looking dangerous in a pair of exhibition games, there’s experience, talent and depth in a number of spots. Newcomers Lucy Whipp, Samie Scaffidi and Christina Bellero all look capable of adding something during their first season in the Big East as well, meaning St. John's is certainly a team that could make good on preseason voting.

It wasn’t too long ago that the Golden Eagles sat atop the Big East. Times have changed, of course, as Marquette missed the NCAA Tournament for the first time in seven seasons last year. This year’s group is certainly talented enouhg to be competitive, but it's also young, with just three seniors on the roster in Amanda Englek, Jacie Jermier and Ann Marie Lunch. Juniors Elizabeth Bartels and Morgan Proffitt are also both important figures on a side that was picked to finish fourth in the Big East in preseason polling.

The supremely talented Catherine Zimmerman gives the neutral observer a reason to track the Friars as they search for league improvement in 2015. Finding a compliment for Zimmerman’s scoring abilities is paramount to that task, as she accounted for 11 of the team’s 20 tallies during the 2014 campaign.

Two of the league’s most talented midfielders in Sophia Maccagnone and Serina Kashimoto grace the Butler roster. As she enters her senior season, Magganone is fresh off a five goal, 10 assist campaign as the Bulldogs look to claw their way up the standings.

The Wildcats face a decent amount of turnover in 2015, as only five starters are back. Seven new players were also added to the roster, but it’ll be the contributions of experienced players such as Christina Camassa, Katie Martin, Emily Kuefler and Renee Hart to boost Villanova into a higher gear on the Main Line.

It was a tale of two schedules for the Bluejays in 2014, compiling an 8-1 non-conference record, only to see the wheels come off once the Big East schedule hit. The tune could be similar this year, as Creighton’s non-conference slate is once again far from the most demanding. New head coach Ross Paule, who played at Creighton in the mid-90s, enters his first Division I head coaching gig at his alma mater. Paule will be able to call on his four top scorers from last season, including All-Big East Second Teamer Lauren Sullivan.

Spotting the area of improvement is easy when breaking down the Pirates performance from a year ago: goal scoring. No one on the roster managed more than a single goal, as Seton Hall bagged just eight tallies in 18 games. A crop of 11 newcomers, which includes local forwards Tanika Roach, Julia Stirpe and Sarah Grace Johnson, might help give that total a shot in the arm and improve the team's fortunes this season.

Can the Musketeers bounce back from last year’s three-win campaign? Like the Pirates, getting more goals a huge piece of it, after managing just 10 all of 2014. A lot of experienced contributors are back looking to improve things, including forward Tori Doss and midfielder Catherine Allon.