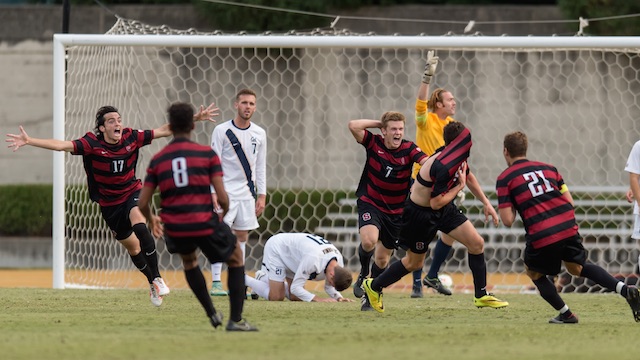 There’s perhaps no better way to sum up the Pac-12’s wild ride in 2014 than this: the team that advanced to the final match of the NCAA postseason didn’t even win the conference. The Pac-12 was that good in 2014, a year that marked out the west coast league as perhaps the preeminent top-end conference in the country. UCLA probably deserved a national title on balance of play, but Virginia’s hearty defense stonewalled the Bruins on the doorstep and denied them a fifth national championship in penalties.

Meanwhile, Stanford couldn’t parlay a Pac-12 championship and Jordan Morris’ sophomore year into a single NCAA tournament win (or goal, for that matter). With all the firepower those two programs return this season, the rest of the Pac-12 is locked in a vigorous game of catch the leader(s).

UCLA is as locked and loaded for a title run as any team in the country. Yes, the Bruins must deal with some losses, namely those of keeper Earl Edwards and metronomic midfielder Leo Stolz, who won the Hermann Trophy. But UCLA returns Abu Danladi, the nation’s (and the conference’s) second-best forward, a midfield choked with talent led by Brian Iloski, and a defense with USMNT hopefuls Chase Gaspar and Michael Amick. UCLA isn’t just a favorite to reclaim the Pac-12. They’re a natural pick to win the whole thing.

Stanford is, without question, the Bruins’ largest impediment. We managed to go three full paragraphs without talking about Jordan Morris, but that stops now. Stanford coach Jeremy Gunn somehow managed to hang on to Morris through an offseason that featured a full national team goal against Mexico and heated interest from hometown club Seattle Sounders. Morris is the best player in college soccer, full stop, and he’s surrounded by more talent than ever. Corey Baird, Brandon Vincent, Ty Thompson - there’s quality everywhere you look. And don’t forget the ridiculous freshman class, which features top U.S. prospect Amir Bashti. That Stanford-UCLA fixture should be as good as ever.

A league-record five teams earned bids to the NCAA tournament last year: UCLA, Stanford, Cal, Washington and Oregon State. Of the three not named Stanford or UCLA, you might as well throw them up in the air and see who comes down ahead. Cal graduated its critical three-headed hydra of Stefano Bonomo, Seth Casiple and Connor Hallisey, which represented the majority of the offense. Washington was decimated by departures: Cristian Roldan, Darwin Jones, Andy Thoma and keeper Spencer Richey are all with MLS clubs now. As for Oregon State, the Beavers lost second overall MLS draft pick Khiry Shelton, arguably the most critical single player to any one team anywhere in the country.

The question for all three is which team has the leftover talent and recruited reinforcements to fill the gaps. Washington, which has had a tremendous two-year run featuring a Pac-12 title in 2013, will turn to striker Mason Robertson and senior midfielder James Moberg, a surefire first round pick in 2016. Cal has just five upperclassmen on the roster, but technical talent abounds in players like creator Jose Carrera-Garcia and Christian Thierjung.

Oregon State, meanwhile, is getting striker and defending league rookie of the year Timmy Mueller back after he was named the PDL Player of the Year following a strong summer. The worst news the Beavers got this summer came when top recruit Christian Lucatero, a true game-changer, signed a Homegrown deal with the Houston Dynamo weeks before the season started. It’s fair to put the Beavers in a relative dead heat with Washington and Cal entering the season, even if the latter two seem to have a bit more pieces back.

San Diego State won just one game in the Pac-12 last year, but there were promising vital signs at the end of the year. The Aztecs faced a murderer’s row to finish the season in Washington, Cal, Stanford and UCLA, and they lost each four by just a goal (and took Stanford to OT). Of the nine returning upperclassmen, six are defenders grizzled by the attacking realities of the Pac-12. That should help the build process while the attack gels. That won’t get any easier with the outbound transfer of attacking talisman David Olsen, who led the team as a freshman with seven goals in 2014 and now plays for Seattle University. Of the 22 goals SDSU scored last year, only six return, led by Rene Reyes’ two. The young players will have to grow up fast.