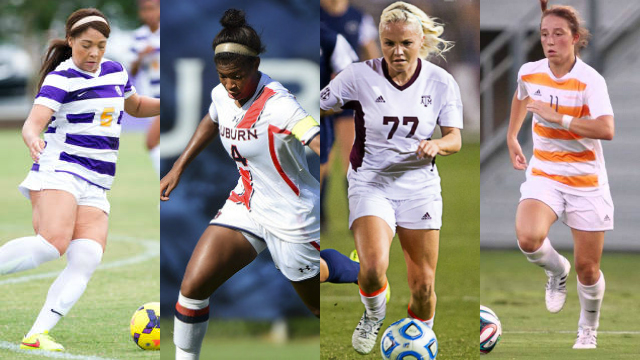 Changeover is the name of the game in College Station, as the Aggies lost their sensational senior class that led them to last fall’s College Cup. Head coach G Guerrieri has been hard at work anticipating this of course, with two very solid back-to-back recruiting classes. The time is now for them to step into the spotlight, with sophomores Stephanie Malherbe, McKayla Paulson, Mikaela Harvey and Haley Pounds all set to play a more prominent role. Given the program’s stature and depth, it’s hard to see a big drop off coming despite the talent loss.

The second of the SEC’s perennial title challengers, the Gators boast one of the nation’s top attacking players, with forward Savannah Jordan leading the line once again. Retooling certain spots of the field is a concern for the upcoming season, but the defense is in good hands with All SEC performers Claire Falknor and Christen Westphal back. A massive recruiting class of 15 players includes a number of promising young players who porvie a certain X Factor this season.

Coming off the most successful season in program history, the Wildcats enter 2015 looking to replace the dynamic presence of Arin Gilliland, who is currently tearing up the NWSL with the Chicago Red Stars. The good news is that nine starters are back, including midfielder Courtney Raetzman, and the defensive core of Alexandria Carter, Cara Ledman and Olivia Jester. As long as Gilliland’s departure is adequately coped with, the Wildcats should find themselves towards the top of the standings once again.

Longtime head coach Bryan Blitz (who has been in charge at Missouri for all 20 years of the program’s history) heads back into the SEC fray after a solid 2014 campaign. Reagan Russell is one of the team’s key returners, as 21 players in total are back from last year. The Tigers took a preseason trip to California to face UCLA, which should prove useful as the season ramps up and begins this weekend.

Defensively formidable with Sabrina D'Angelo in goal for the past four years, a new Gamecock era begins this fall after the Candian star exhausted her eligibility. Attention turns towards the team’s attack, which funneled through SEC Freshman of the Year Savannah McKaskill. The sophomore is the spearhead up front this season, where she’ll be joined by Raina Johnson and supplied by Chelsea Drennan and Stevi Parker in the midfield.

The Tigers are back for more after a 12-win season and an appearance in the second round of the 2014 NCAA Tournament. A conference crown might not be within reach, but with players like defender Kala Faulkner, forwards Casie Ramsier and Kristen Dodson back in the fold, Auburn has weapons in each part of the park who can produce game-changing moments.

One of three SEC programs with a new head coach ahead of the 2015 campaign, Alabama brought in Florida State assistant Wes Hart, who brings plenty of DI success with him to Tuscaloosa. Whether he can achieve the same results right away remains to be seen, but he has a decent base of talent at his disposal. In goal, senior Emily Rusk is coming off a sensational junior season, giving the Crimson Tide a platform to build on going forward. Spanish transfer Celia Jimenez picked up experience at this summer’s Women’s World Cup and is another player to keep an eye on as she makes the move from Iowa Western Community College.

Another program to welcome a new coach to its ranks, former Duke associate head coach Billy Lesesne is now in charge at Georgia. The transfer of Gabby Seiler to fellow SEC program Florida is a blow that will be slightly tempered by the return of attackers Marion Crowder and Kelsey Killean.

Under Colby Hale, Arkansas secured back-to-back winning seasons for the first time since 2009. And while 2014 didn’t quite reach the dizzying heights of 2013’s NCAA Tournament run, the Razorbacks seem poised to climb towards another winning season. The bulk of their offense returns, with attacking talent Ashleigh Ellenwood, Claire Kelley and Alexandra Fischer back after combining for 17 goals and 24 assists last season.

The elements all seem in place for a Tennessee breakout season. Two straight top five recruiting hauls, exciting U.S. youth national team talent in the midfield with Katie Cousins and Carlyn Baldwin, and nine starters returning for 2015. That optimism was dealt a blow last week, when New Zealand forward Hannah Wilkinson tore her ACL against Clemson in a preseason match. If someone like Amy Neal can step up to score goals and occupy opposing defenders, it would definitely help cope with Wilkinson's absence, but no matter what it certainly puts a damper on what looked like a promising year.

The search for an SEC dark horse could lead to Ole Miss, with 10 starters returning. That includes all of the main goal supply from a year ago, as Addie Forcus, Olivia Harrison and Jessica Hirskey provided the bulk of the scoring thrust. The starting goalkeeper role is up for grabs with the graduation of Kelly McCormick, but that’s the only big ask facing the Rebels as the season kicks off.

Darren Ambrose rounds out the SEC coaching merry go round, as the former Penn coach took the reigns of the Nashville program earlier this year. He has some promising pieces at his disposal as he looks to hit the ground running, including two-sport track star Simone Charley up top, and a midfield stocked with Lydia Simmons, Erin Myers and Cristina DeZeeuw. Ambrose has shown the ability to turn a program into a winner at Penn, so don’t be surprised to see the Commodores punch above their weight in 2015.

On paper, LSU has stockpiled an impressive array of talent from around the globe, with youth internationals from Canada, New Zealand, Mexico, Colombia, England and the United States. Putting it together on the field hasn’t come off quite yet, though most of its dynamic attackers return, including forwards Summer Clarke and Jorian Baucom. Can they find the right formula?

A young team composed of 20 freshmen and sophomores might not trigger a massive turnaround as MSU continues to build for the future. The team did lose only one senior after last season but it was a big piece in leading scorer Shannen Jainudeen, who accounted for seven of the team’s 13 goals.